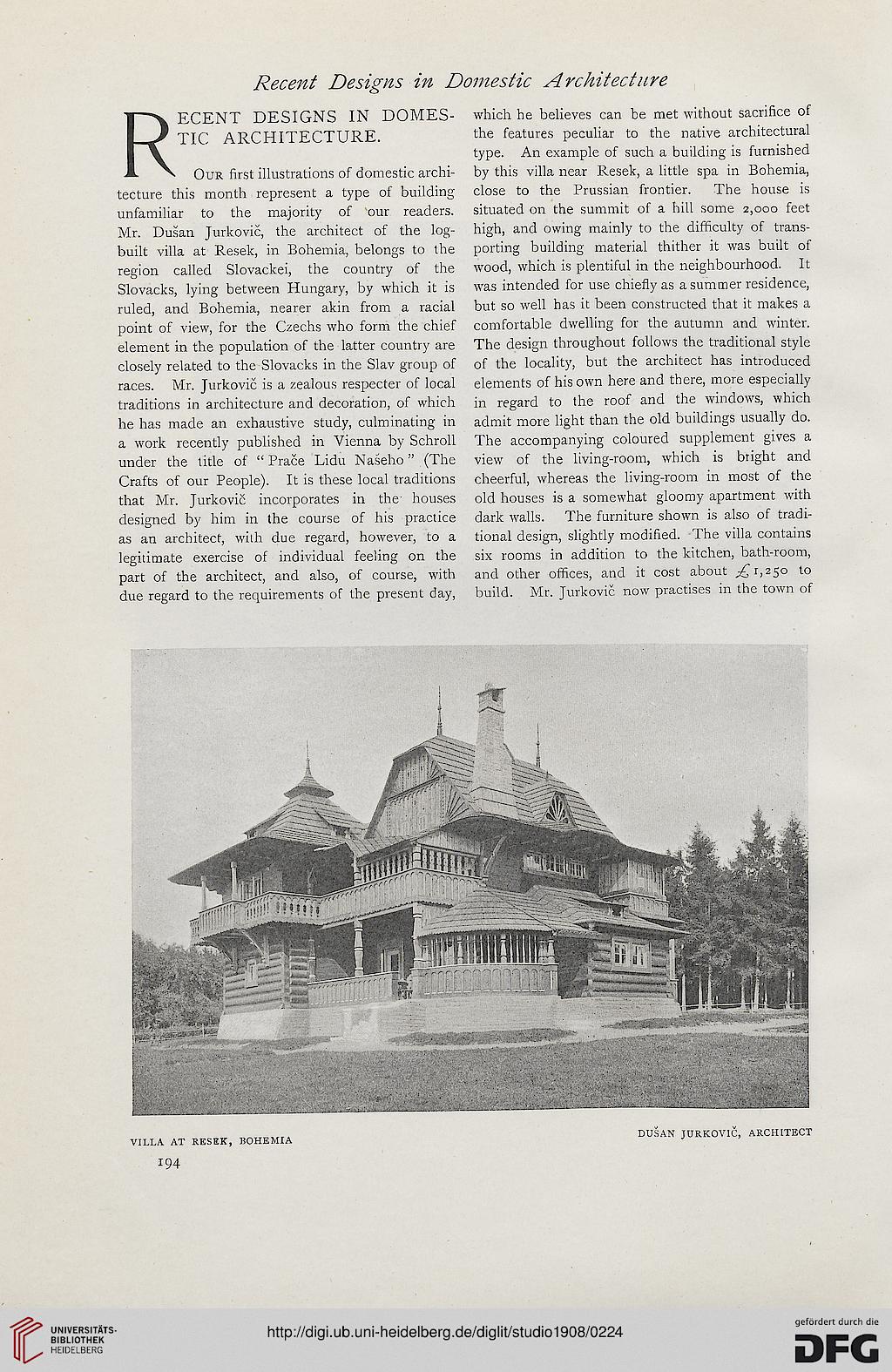 RECENT DESIGNS IN DOMES-
TIC ARCHITECTURE.
Our first illustrations of domestic archi-
tecture this month represent a type of building
unfamiliar to the majority of our readers.
Mr. Dusan Jurkovic, the architect of the log-
built villa at Resek, in Bohemia, belongs to the
region called Slovackei, the country of the
Slovacks, lying between Hungary, by which it is
ruled, and Bohemia, nearer akin from a racial
point of view, for the Czechs who form the chief
element in the population of the latter country are
closely related to the Slovacks in the Slav group of
races. Mr. Jurkovic is a zealous respecter of local
traditions in architecture and decoration, of which
he has made an exhaustive study, culminating in
a work recently published in Vienna by Schroll
under the title of " Prace Lidu Naseho" (The
Crafts of our People). It is these local traditions
that Mr. Jurkovic incorporates in the houses
designed by him in the course of his practice
as an architect, with due regard, however, to a
legitimate exercise of individual feeling on the
part of the architect, and also, of course, with
due regard to the requirements of the present day,

which he believes can be met without sacrifice of
the features peculiar to the native architectural
type. An example of such a building is furnished
by this villa near Resek, a little spa in Bohemia,
close to the Prussian frontier. The house is
situated on the summit of a hill some 2,000 feet
high, and owing mainly to the difficulty of trans-
porting building material thither it was built of
wood, which is plentiful in the neighbourhood. It
was intended for use chiefly as a summer residence,
but so well has it been constructed that it makes a
comfortable dwelling for the autumn and winter.
The design throughout follows the traditional style
of the locality, but the architect has introduced
elements of his own here and there, more especially
in regard to the roof and the windows, which
admit more light than the old buildings usually do.
The accompanying coloured supplement gives a
view of the living-room, which is bright and
cheerful, whereas the living-room in most of the
old houses is a somewhat gloomy apartment with
dark walls. The furniture shown is also of tradi-
tional design, slightly modified. The villa contains
six rooms in addition to the kitchen, bath-room,
and other offices, and it cost about ^1,250 to
build. Mr. Jurkovic now practises in the town of