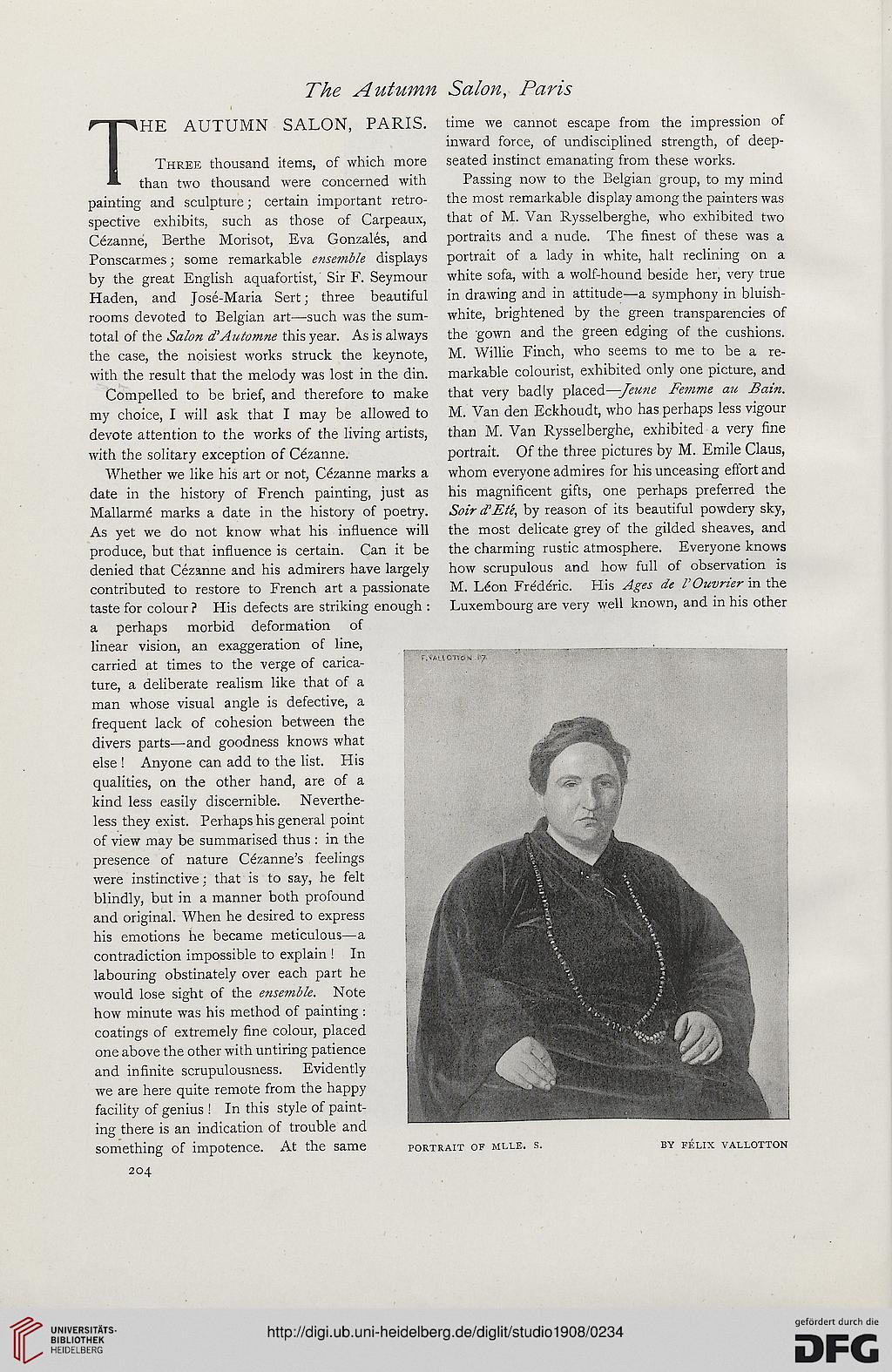 THE AUTUMN SALON, PARIS, time we cannot escape from the impression of
inward force, of undisciplined strength, of deep-
Three thousand items, of which more seated instinct emanating from these works,
than two thousand were concerned with Passing now to the Belgian group, to my mind
painting and sculpture ; certain important retro- the most remarkable display among the painters was
spective exhibits, such as those of Carpeaux, that of M. Van Rysselberghe, who exhibited two
Cezanne, Berthe Morisot, Eva Gonzales, and portraits and a nude. The finest of these was a
Ponscarmes; some remarkable ensemble displays portrait of a lady in white, halt reclining on a
by the great English aquafortist, Sir F. Seymour white sofa, with a wolf-hound beside her, very true
Haden, and Jose-Maria Sert; three beautiful in drawing and in attitude—a symphony in bluish-
rooms devoted to Belgian art—such was the sum- white, brightened by the green transparencies of
total of the Salon d'Automne this year. As is always the gown and the green edging of the cushions,
the case, the noisiest works struck the keynote, M. Willie Finch, who seems to me to be a re-
with the result that the melody was lost in the din. markable colourist, exhibited only one picture, and
Compelled to be brief, and therefore to make that very badly placed—Jeune Femme au Bain.
my choice, I will ask that I may be allowed to M. Van den Eckhoudt, who has perhaps less vigour
devote attention to the works of the living artists, than M. Van Rysselberghe, exhibited a very fine
with the solitary exception of Cezanne. portrait. Of the three pictures by M. Emile Claus,

Whether we like his art or not, Cezanne marks a whom everyone admires for his unceasing effort and
date in the history of French painting, just as his magnificent gifts, one perhaps preferred the
Mallarme marks a date in the history of poetry. Soir d'JZit, by reason of its beautiful powdery sky,
As yet we do not know what his influence will the most delicate grey of the gilded sheaves, and
produce, but that influence is certain. Can it be the charming rustic atmosphere. Everyone knows
denied that Cezanne and his admirers have largely how scrupulous and how full of observation is
contributed to restore to French art a passionate M. L£on Fre'de'ric. His Ages de VOuvrier in the
taste for colour ? His defects are striking enough : Luxembourg are very well known, and in his other
a perhaps morbid deformation of
linear vision, an exaggeration of line,
carried at times to the verge of carica-
ture, a deliberate realism like that of a
man whose visual angle is defective, a
frequent lack of cohesion between the
divers parts—and goodness knows what
else ! Anyone can add to the list. His
qualities, on the other hand, are of a
kind less easily discernible. Neverthe-
less they exist. Perhaps his general point
of view may be summarised thus : in the
presence of nature Cezanne's feelings
were instinctive: that is to say, he felt
blindly, but in a manner both profound
and original. When he desired to express
his emotions he became meticulous—a
contradiction impossible to explain ! In
labouring obstinately over each part he
would lose sight of the ensemble. Note
how minute was his method of painting :
coatings of extremely fine colour, placed
one above the other with untiring patience
and infinite scrupulousness. Evidently
we are here quite remote from the happy
facility of genius ! In this style of paint-
ing there is an indication of trouble and
something of impotence. At the same portrait of mlle. s. by felix vallotton