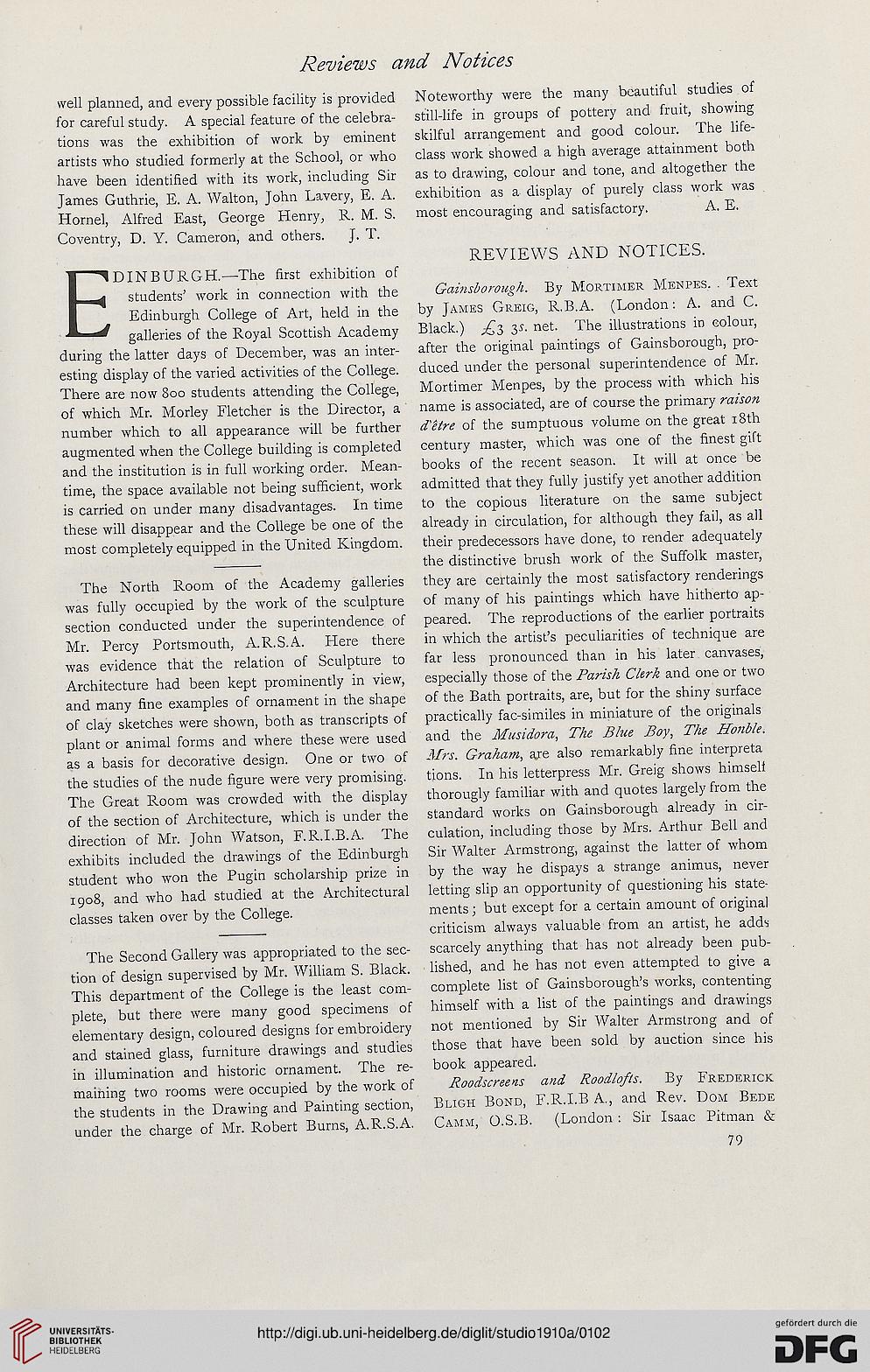 well planned, and every possible facility is provided
for careful study. A special feature of the celebra-
tions was the exhibition of work by eminent
artists who studied formerly at the School, or who
have been identified with its work, including Sir
James Guthrie, E. A. Walton, John Lavery, E. A.
Hornel, Alfred East, George Henry, R. M. S.
Coventry, D. Y. Cameron, and others. J. T.

EDINBURGH.—The first exhibition of
students’ work in connection with the
Edinburgh College of Art, held in the
galleries of the Royal Scottish Academy
during the latter days of December, was an inter-
esting display of the varied activities of the College.
There are now 800 students attending the College,
of which Mr. Morley Fletcher is the Director, a
number which to all appearance will be further
augmented when the College building is completed
and the institution is in full working order. Mean-
time, the space available not being sufficient, work
is carried on under many disadvantages. In time
these will disappear and the College be one of the
most completely equipped in the United Kingdom.

The North Room of the Academy galleries
was fully occupied by the work of the sculpture
section conducted under the superintendence of
Mr. Percy Portsmouth, A.R.S.A. Here there
was evidence that the relation of Sculpture to
Architecture had been kept prominently in view,
and many fine examples of ornament in the shape
of clay sketches were shown, both as transcripts of
plant or animal forms and where these were used
as a basis for decorative design. One or two of
the studies of the nude figure were very promising.
The Great Room was crowded with the display
of the section of Architecture, which is under the
direction of Mr. John Watson, F. R.I.B.A. The
exhibits included the drawings of the Edinburgh
student who won the Pugin scholarship prize in
1908, and who had studied at the Architectural
classes taken over by the College.

The Second Gallery was appropriated to the sec-
tion of design supervised by Mr. William S. Black.
This department of the College is the least com-
plete, but there were many good specimens of
elementary design, coloured designs for embroidery
and stained glass, furniture drawings and studies
in illumination and historic ornament. The re-
maining two rooms were occupied by the work of
the students in the Drawing and Painting section,
under the charge of Mr. Robert Burns, A.R.S.A.

Noteworthy were the many beautiful studies of
still-life in groups of pottery and fruit, showing
skilful arrangement and good colour. The life-
class work showed a high average attainment both
as to drawing, colour and tone, and altogether the
exhibition as a display of purely class work was
most encouraging and satisfactory. A. E.

Gainsborough. By Mortimer Menpes. . Text
by James Greig, R.B.A. (London: A. and C.
Black.) ^3 3$. net. The illustrations in colour,
after the original paintings of Gainsborough, pro-
duced under the personal superintendence of Mr.
Mortimer Menpes, by the process with which his
name is associated, are of course the primary raison
d'etre of the sumptuous volume on the great 18th
century master, which was one of the finest gift
books of the recent season. It will at once be
admitted that they fully justify yet another addition
to the copious literature on the same subject
already in circulation, for although they fail, as all
their predecessors have done, to render adequately
the distinctive brush work of the Suffolk master,
they are certainly the most satisfactory renderings
of many of his paintings which have hitherto ap-
peared. The reproductions of the earlier portraits
in which the artist’s peculiarities of technique are
far less pronounced than in his later canvases,
especially those of the Parish Clerk and one or two
of the Bath portraits, are, but for the shiny surface
practically fac-similes in miniature of the originals
and the Musidora, The Blue Boy, The Honble.
Mrs. Graham, aje also remarkably fine interpreta
tions. In his letterpress Mr. Greig shows himsell
thorougly familiar with and quotes largely from the
standard works on Gainsborough already in cir-
culation, including those by Mrs. Arthur Bell and
Sir Walter Armstrong, against the latter of whom
by the way he dispays a strange animus, never
letting slip an opportunity of questioning his state-
ments ; but except for a certain amount of original
criticism always valuable from an artist, he adds
scarcely anything that has not already been pub-
lished, and he has not even attempted to give a
complete list of Gainsborough’s works, contenting
himself with a list of the paintings and drawings
not mentioned by Sir Walter Armstrong and of
those that have been sold by auction since his
book appeared.