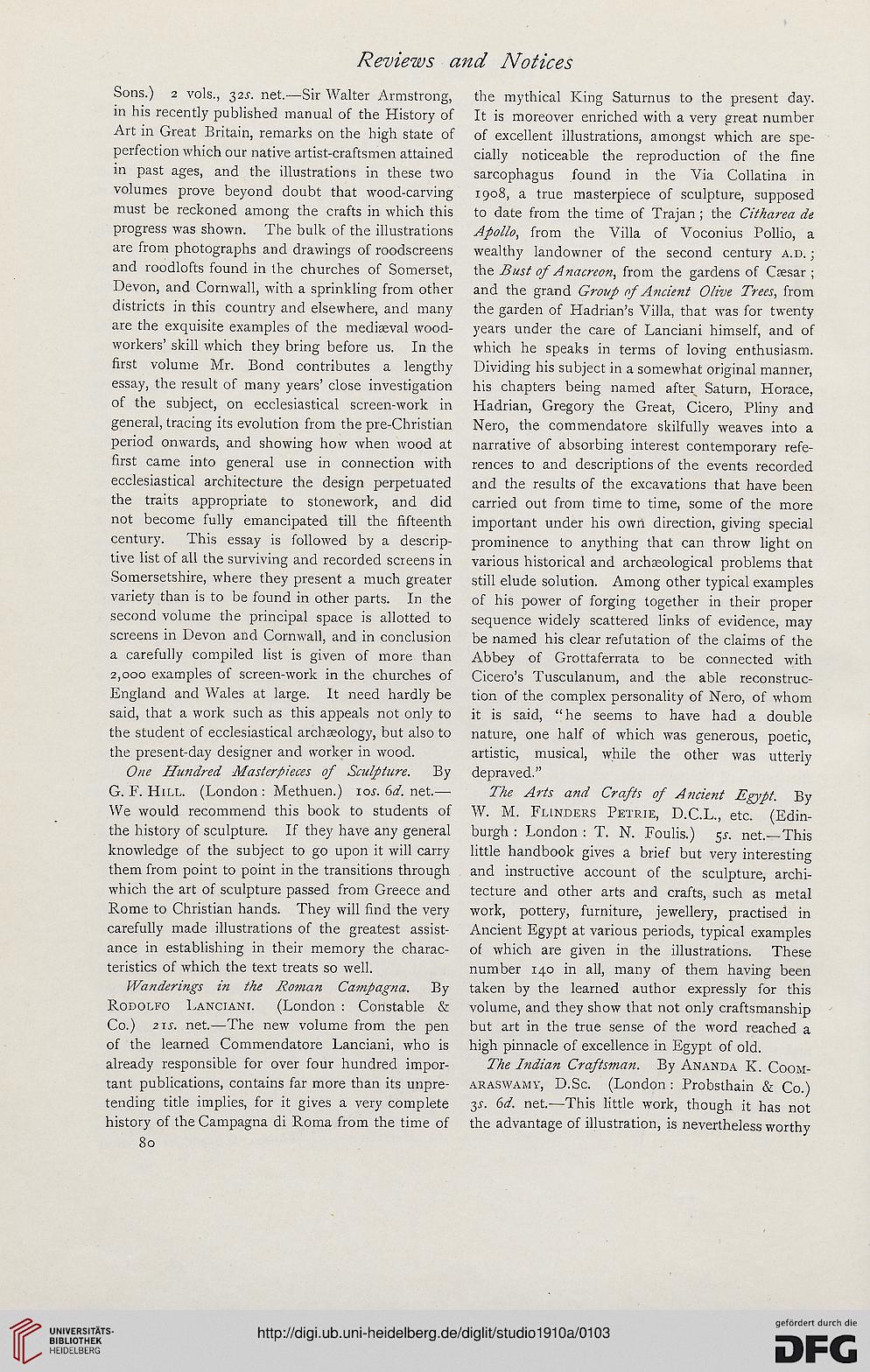 Sons.) 2 vols., 32.L net.—Sir Walter Armstrong,
in his recently published manual of the History of
Art in Great Britain, remarks on the high state of
perfection which our native artist-craftsmen attained
in past ages, and the illustrations in these two
volumes prove beyond doubt that wood-carving
must be reckoned among the crafts in which this
progress was shown. The bulk of the illustrations
are from photographs and drawings of roodscreens
and roodlofts found in the churches of Somerset,
Devon, and Cornwall, with a sprinkling from other
districts in this country and elsewhere, and many
are the exquisite examples of the mediaeval wood-
workers’ skill which they bring before us. In the
first volume Mr. Bond contributes a lengthy
essay, the result of many years’ close investigation
of the subject, on ecclesiastical screen-work in
general, tracing its evolution from the pre-Christian
period onwards, and showing how when wood at
first came into general use in connection with
ecclesiastical architecture the design perpetuated
the traits appropriate to stonework, and did
not become fully emancipated till the fifteenth
century. This essay is followed by a descrip-
tive list of all the surviving and recorded screens in
Somersetshire, where they present a much greater
variety than is to be found in other parts. In the
second volume the principal space is allotted to
screens in Devon and Cornwall, and in conclusion
a carefully compiled list is given of more than
2,000 examples of screen-work in the churches of
England and Wales at large. It need hardly be
said, that a work such as this appeals not only to
the student of ecclesiastical archaeology, but also to
the present-day designer and worker in wood.

One Hundred Masterpieces of Sculpture. By
G. F. Hill. (London : Methuen.) iot. 6d. net.—
We would recommend this book to students of
the history of sculpture. If they have any general
knowledge of the subject to go upon it will carry
them from point to point in the transitions through
which the art of sculpture passed from Greece and
Rome to Christian hands. They will find the very
carefully made illustrations of the greatest assist-
ance in establishing in their memory the charac-
teristics of which the text treats so well.

Wanderings in the Roman Campagna. By
Rodolfo Lanciani. (London : Constable &
Co.) 2U. net.—The new volume from the pen
of the learned Commendatore Lanciani, who is
already responsible for over four hundred impor-
tant publications, contains far more than its unpre-
tending title implies, for it gives a very complete
history of the Campagna di Roma from the time of
80

the mythical King Saturnus to the present day.
It is moreover enriched with a very great number
of excellent illustrations, amongst which are spe-
cially noticeable the reproduction of the fine
sarcophagus found in the Via Collatina in
1908, a true masterpiece of sculpture, supposed
to date from the time of Trajan; the Citharea de
Apollo, from the Villa of Voconius Pollio, a
wealthy landowner of the second century a.d. ;
the Bust of Anacreon, from the gardens of Caesar ;
and the grand Group of Ancient Olive Trees, from
the garden of Hadrian’s Villa, that was for twenty
years under the care of Lanciani himself, and of
which he speaks in terms of loving enthusiasm.
Dividing his subject in a somewhat original manner,
his chapters being named after Saturn, Horace,
Hadrian, Gregory the Great, Cicero, Pliny and
Nero, the commendatore skilfully weaves into a
narrative of absorbing interest contemporary refe-
rences to and descriptions of the events recorded
and the results of the excavations that have been
carried out from time to time, some of the more
important under his own direction, giving special
prominence to anything that can throw light on
various historical and archaeological problems that
still elude solution. Among other typical examples
of his power of forging together in their proper
sequence widely scattered links of evidence, may
be named his clear refutation of the claims of the
Abbey of Grottaferrata to be connected with
Cicero’s Tusculanum, and the able reconstruc-
tion of the complex personality of Nero, of whom
it is said, “he seems to have had a double
nature, one half of which was generous, poetic,
artistic, musical, while the other was utterly
depraved.”

little handbook gives a brief but very interesting
and instructive account of the sculpture, archi-
tecture and other arts and crafts, such as metal
work, pottery, furniture, jewellery, practised in
Ancient Egypt at various periods, typical examples
of which are given in the illustrations. These
number 140 in all, many of them having been
taken by the learned author expressly for this
volume, and they show that not only craftsmanship
but art in the true sense of the word reached a
high pinnacle of excellence in Egypt of old.

The Indian Craftsman. By Ananda K. Coom-
araswamy, D.Sc. (London : Probsthain & Co.)
3s. 6d. net.—This little work, though it has not
the advantage of illustration, is nevertheless worthy