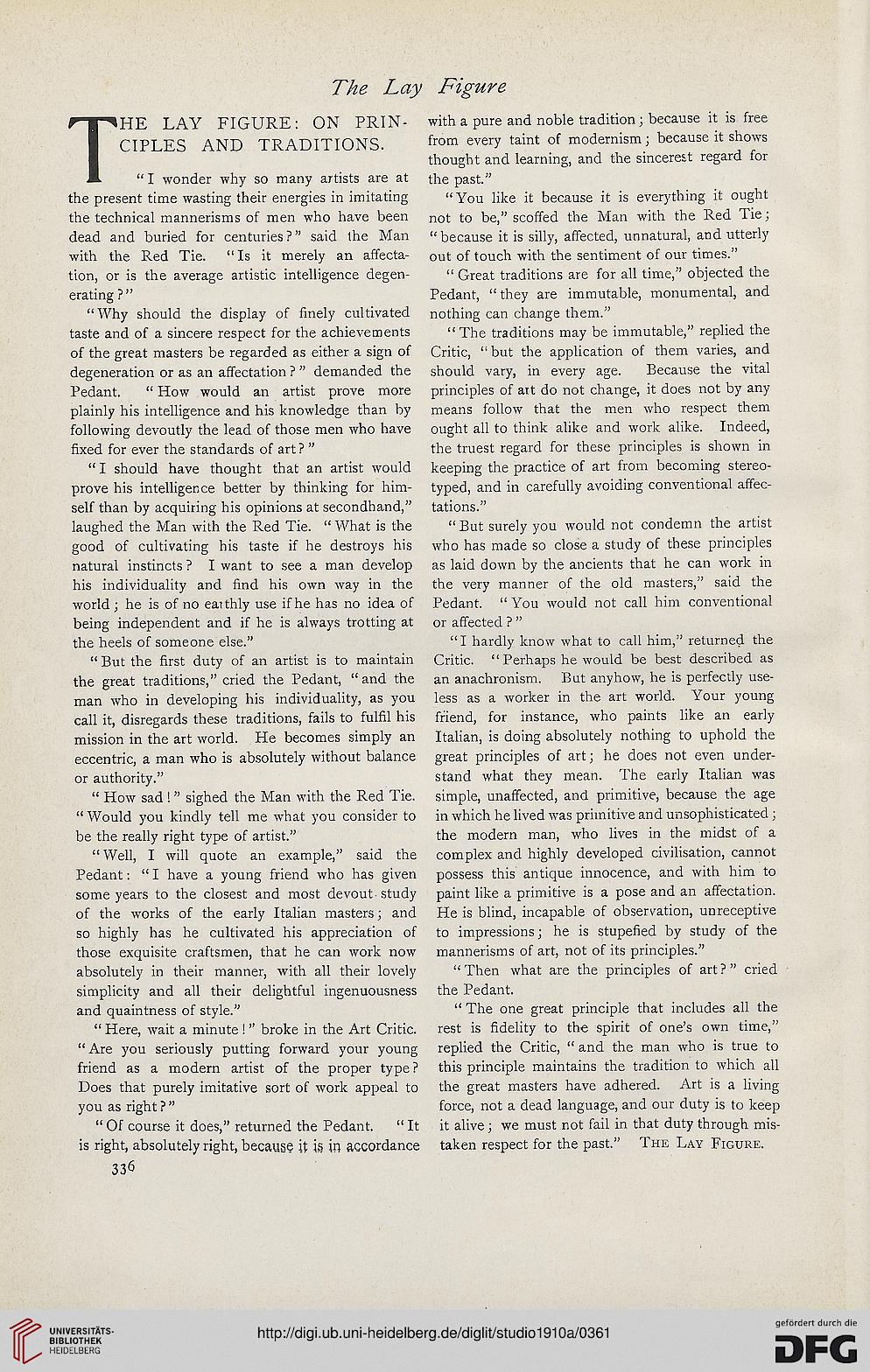 HE LAY FIGURE: ON PRIN-
CIPLES AND TRADITIONS.

: I wonder why so many artists are at
the present time wasting their energies in imitating
the technical mannerisms of men who have been
dead and buried for centuries ? ” said the Man
with the Red Tie. “ Is it merely an affecta-
tion, or is the average artistic intelligence degen-
erating ? ”

“Why should the display of finely cultivated
taste and of a sincere respect for the achievements
of the great masters be regarded as either a sign of
degeneration or as an affectation ? ” demanded the
Pedant. “ How would an artist prove more
plainly his intelligence and his knowledge than by
following devoutly the lead of those men who have
fixed for ever the standards of art? ”

“ I should have thought that an artist would
prove his intelligence better by thinking for him-
self than by acquiring his opinions at secondhand,”
laughed the Man with the Red Tie. “ What is the
good of cultivating his taste if he destroys his
natural instincts ? I want to see a man develop
his individuality and find his own way in the
world ; he is of no eatthly use if he has no idea of
being independent and if he is always trotting at
the heels of someone else.”

“ But the first duty of an artist is to maintain
the great traditions,” cried the Pedant, “and the
man who in developing his individuality, as you
call it, disregards these traditions, fails to fulfil his
mission in the art world. He becomes simply an
eccentric, a man who is absolutely without balance
or authority.”

“ How sad ! ” sighed the Man with the Red Tie.
“ Would you kindly tell me what you consider to
be the really right type of artist.”

“ Well, I will quote an example,” said the
Pedant: “ I have a young friend who has given
some years to the closest and most devout study
of the works of the early Italian masters; and
so highly has he cultivated his appreciation of
those exquisite craftsmen, that he can work now
absolutely in their manner, with all their lovely
simplicity and all their delightful ingenuousness
and quaintness of style.”

“ Here, wait a minute ! ’’ broke in the Art Critic.
“ Are you seriously putting forward your young
friend as a modern artist of the proper type ?
Does that purely imitative sort of work appeal to
you as right ? ”

“ Of course it does,” returned the Pedant. “ It
is right, absolutely right, because if j§ in accordance
336

with a pure and noble tradition; because it is free
from every taint of modernism; because it shows
thought and learning, and the sincerest regard for
the past.”

“You like it because it is everything it ought
not to be,” scoffed the Man with the Red Tie;
“because it is silly, affected, unnatural, and utterly
out of touch with the sentiment of our times.”

“ Great traditions are for all time,” objected the
Pedant, “ they are immutable, monumental, and
nothing can change them.”

“The traditions may be immutable,” replied the
Critic, “ but the application of them varies, and
should vary, in every age. Because the vital
principles of ait do not change, it does not by any
means follow that the men who respect them
ought all to think alike and work alike. Indeed,
the truest regard for these principles is shown in
keeping the practice of art from becoming stereo-
typed, and in carefully avoiding conventional affec-
tations.”

“ But surely you would not condemn the artist
who has made so close a study of these principles
as laid down by the ancients that he can work in
the very manner of the old masters,” said the
Pedant. “ You would not call him conventional
or affected ? ”

“I hardly know what to call him,” returned the
Critic. “ Perhaps he would be best described as
an anachronism. But anyhow, he is perfectly use-
less as a worker in the art world. Your young
friend, for instance, who paints like an early
Italian, is doing absolutely nothing to uphold the
great principles of art; he does not even under-
stand what they mean. The early Italian was
simple, unaffected, and primitive, because the age
in which he lived was primitive and unsophisticated ;
the modern man, who lives in the midst of a
complex and highly developed civilisation, cannot
possess this antique innocence, and with him to
paint like a primitive is a pose and an affectation.
He is blind, incapable of observation, un receptive
to impressions; he is stupefied by study of the
mannerisms of art, not of its principles.”

“ Then what are the principles of art ? ” cried
the Pedant.

“ The one great principle that includes all the
rest is fidelity to the spirit of one’s own time,”
replied the Critic, “ and the man who is true to
this principle maintains the tradition to which all
the great masters have adhered. Art is a living
force, not a dead language, and our duty is to keep
it alive; we must not fail in that duty through mis-
taken respect for the past.” The Lay Figure.