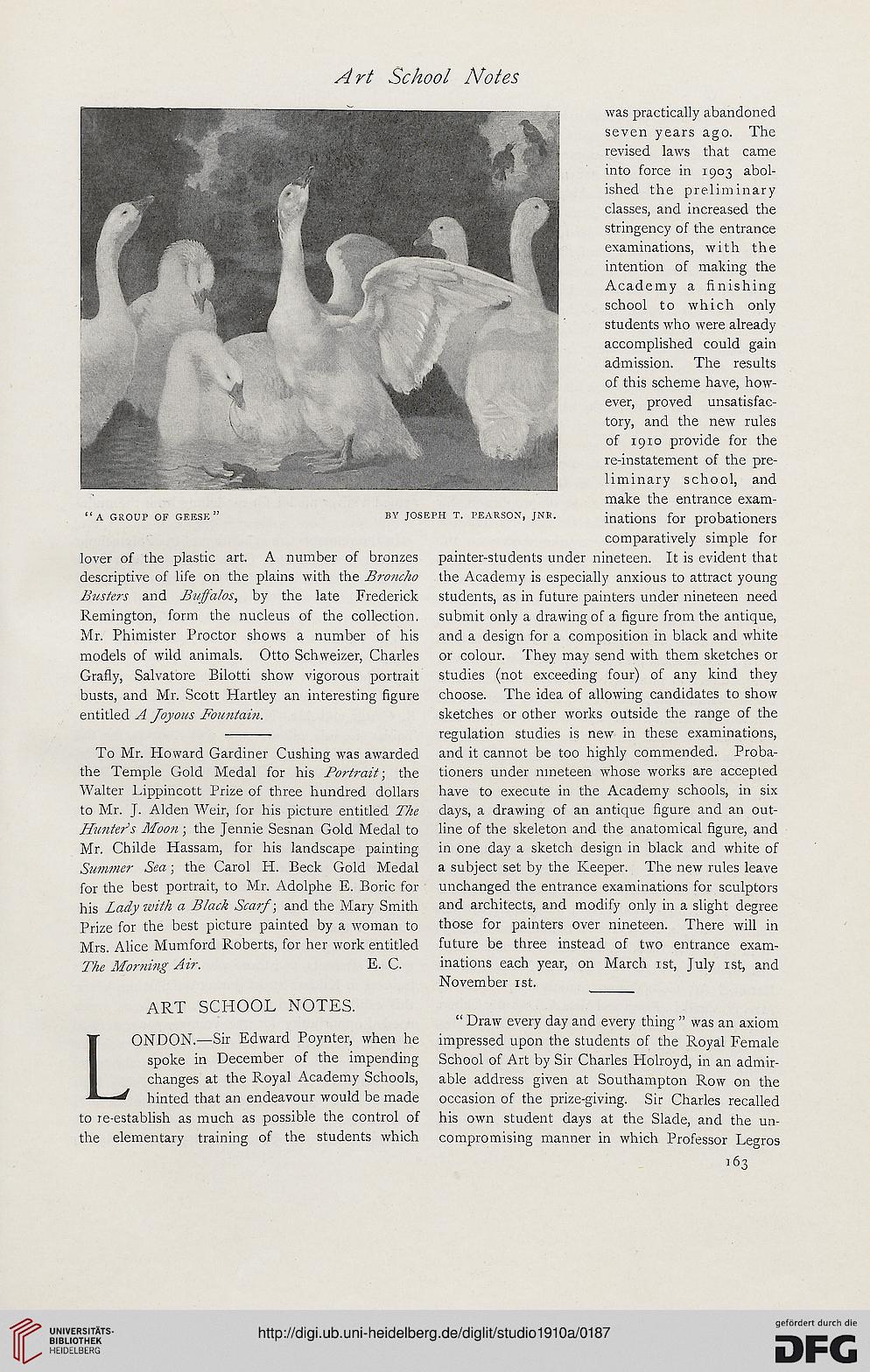 “A GROUP OF GEESE” BY JOSEPH T. PEARSON, JNK.

lover of the plastic art. A number of bronzes
descriptive of life on the plains with the Broncho
Busters and Buffalos, by the late Frederick
Remington, form the nucleus of the collection.
Mr. Phimister Proctor shows a number of his
models of wild animals. Otto Schweizer, Charles
Grafly, Salvatore Bilotti show vigorous portrait
busts, and Mr. Scott Hartley an interesting figure
entitled A Joyous Fountain.

To Mr. Howard Gardiner Cushing was awarded
the Temple Gold Medal for his Portrait; the
Walter Lippincott Prize of three hundred dollars
to Mr. J. Alden Weir, for his picture entitled The
Hunters Moon; the Jennie Sesnan Gold Medal to
Mr. Childe Hassam, for his landscape painting
Summer Sea; the Carol H. Beck Gold Medal
for the best portrait, to Mr. Adolphe E. Boric for
his Lady with a Black Scarf; and the Mary Smith
Prize for the best picture painted by a woman to
Mrs. Alice Mumford Roberts, for her work entitled
The Morning Air. E. C.

LONDON.—Sir Edward Poynter, when he
spoke in December of the impending
changes at the Royal Academy Schools,
hinted that an endeavour would be made
to re-establish as much as possible the control of
the elementary training of the students which

was practically abandoned
seven years ago. The
revised laws that came
into force in 1903 abol-
ished the preliminary
classes, and increased the
stringency of the entrance
examinations, with the
intention of making the
Academy a finishing
school to which only
students who were already
accomplished could gain
admission. The results
of this scheme have, how-
ever, proved unsatisfac-
tory, and the new rules
of 1910 provide for the
re-instatement of the pre-
liminary school, and
make the entrance exam-
inations for probationers
comparatively simple for
painter-students under nineteen. It is evident that
the Academy is especially anxious to attract young
students, as in future painters under nineteen need
submit only a drawing of a figure from the antique,
and a design for a composition in black and white
or colour. They may send with them sketches or
studies (not exceeding four) of any kind they
choose. The idea of allowing candidates to show
sketches or other works outside the range of the
regulation studies is new in these examinations,
and it cannot be too highly commended. Proba-
tioners under nineteen whose works are accepted
have to execute in the Academy schools, in six
days, a drawing of an antique figure and an out-
line of the skeleton and the anatomical figure, and
in one day a sketch design in black and white of
a subject set by the Keeper. The new rules leave
unchanged the entrance examinations for sculptors
and architects, and modify only in a slight degree
those for painters over nineteen. There will in
future be three instead of two entrance exam-
inations each year, on March 1st, July 1st, and
November xst.

“ Draw every day and every thing ” was an axiom
impressed upon the students of the Royal Female
School of Art by Sir Charles Holroyd, in an admir-
able address given at Southampton Row on the
occasion of the prize-giving. Sir Charles recalled
his own student days at the Slade, and the un-
compromising manner in which Professor Legros