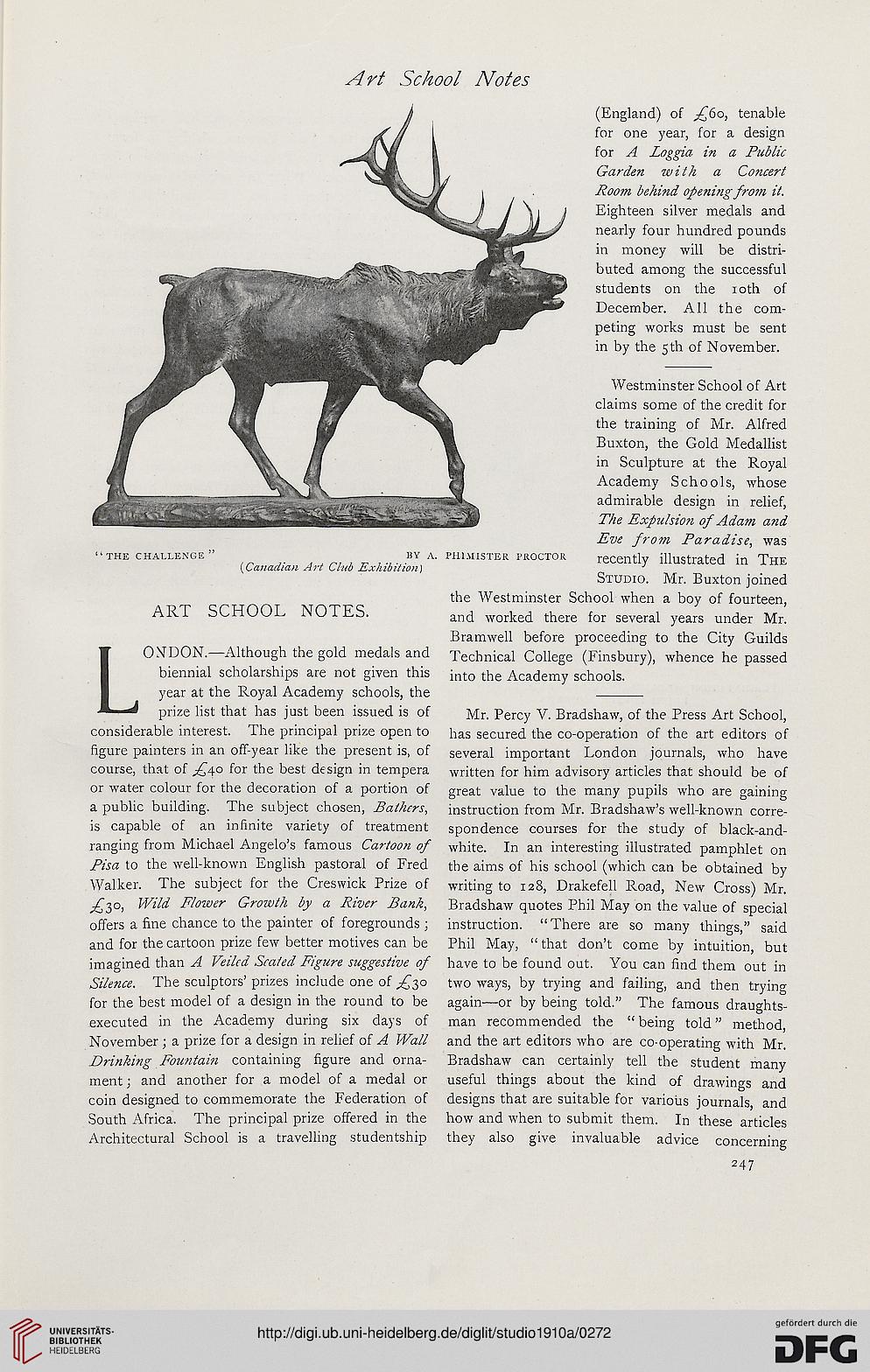 “THE CHALLENGE” BY A.

LONDON.—Although the gold medals and
biennial scholarships are not given this
year at the Royal Academy schools, the
prize list that has just been issued is of
considerable interest. The principal prize open to
figure painters in an off-year like the present is, of
course, that of £40 for the best design in tempera
or water colour for the decoration of a portion of
a public building. The subject chosen, Bathers,
is capable of an infinite variety of treatment
ranging from Michael Angelo’s famous Cartoon of
Pisa to the well-known English pastoral of Fred
Walker. The subject for the Creswick Prize of
^30, Wild Flower Growth by a River Bank,
offers a fine chance to the painter of foregrounds ;
and for the cartoon prize few better motives can be
imagined than A Veiled Seated Figure suggestive of
Silence. The sculptors’ prizes include one of ^30
for the best model of a design in the round to be
executed in the Academy during six days of
November ; a prize for a design in relief of A Wall
Drinking Fountain containing figure and orna-
ment ; and another for a model of a medal or
coin designed to commemorate the Federation of
South Africa. The principal prize offered in the
Architectural School is a travelling studentship

(England) of ^60, tenable
for one year, for a design
for A Loggia in a Public
Garden with a Concert
Room behind opening from it.
Eighteen silver medals and
nearly four hundred pounds
in money will be distri-
buted among the successful
students on the 10th of
December. All the com-
peting works must be sent
in by the 5th of November.

Westminster School of Art
claims some of the credit for
the training of Mr. Alfred
Buxton, the Gold Medallist
in Sculpture at the Royal
Academy Schools, whose
admirable design in relief,
The Exp2ilsio?i of Adam and
Eve from Paradise, was
phimister proctor recently illustrated in The
Studio. Mr. Buxton joined
the Westminster School when a boy of fourteen,
and worked there for several years under Mr.
Bramwell before proceeding to the City Guilds
Technical College (Finsbury), whence he passed
into the Academy schools.

Mr. Percy V. Bradshaw, of the Press Art School,
has secured the co-operation of the art editors of
several important London journals, who have
written for him advisory articles that should be of
great value to the many pupils who are gaining
instruction from Mr. Bradshaw’s well-known corre-
spondence courses for the study of black-and-
white. In an interesting illustrated pamphlet on
the aims of his school (which can be obtained by
writing to 128, Drakefell Road, New Cross) Mr.
Bradshaw quotes Phil May on the value of special
instruction. “There are so many things,” said
Phil May, “that don’t come by intuition, but
have to be found out. You can find them out in
two ways, by trying and failing, and then trying
again—or by being told.” The famous draughts-
man recommended the “ being told ” method,
and the art editors who are co-operating with Mr.
Bradshaw can certainly tell the student many
useful things about the kind of drawings and
designs that are suitable for various journals, and
how and when to submit them. In these articles
they also give invaluable advice concerning