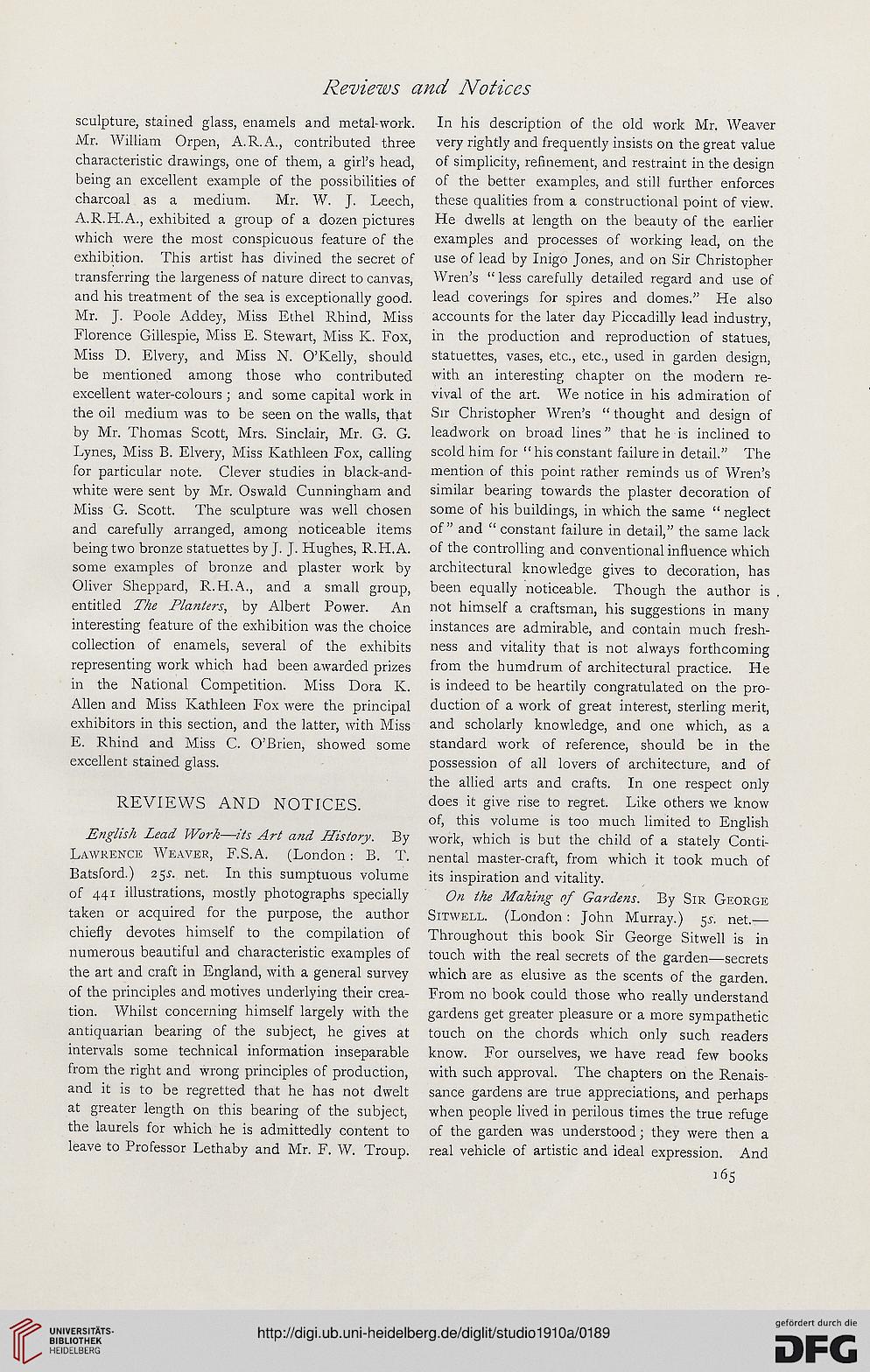 sculpture, stained glass, enamels and metal-work.
Mr. William Orpen, A.R.A., contributed three
characteristic drawings, one of them, a girl’s head,
being an excellent example of the possibilities of
charcoal as a medium. Mr. W. J. Leech,
A.R.H.A., exhibited a group of a dozen pictures
which were the most conspicuous feature of the
exhibition. This artist has divined the secret of
transferring the largeness of nature direct to canvas,
and his treatment of the sea is exceptionally good.
Mr. J. Poole Addey, Miss Ethel Rhind, Miss
Florence Gillespie, Miss E. Stewart, Miss K. Fox,
Miss D. Elvery, and Miss N. O’Kelly, should
be mentioned among those who contributed
excellent water-colours ; and some capital work in
the oil medium was to be seen on the walls, that
by Mr. Thomas Scott, Mrs. Sinclair, Mr. G. G.
Lynes, Miss B. Elvery, Miss Kathleen Fox, calling
for particular note. Clever studies in black-and-
white were sent by Mr. Oswald Cunningham and
Miss G. Scott. The sculpture was well chosen
and carefully arranged, among noticeable items
being two bronze statuettes by J. J. Hughes, R.H. A.
some examples of bronze and plaster work by
Oliver Sheppard, R.H.A., and a small group,
entitled The Planters, by Albert Power. An
interesting feature of the exhibition was the choice
collection of enamels, several of the exhibits
representing work which had been awarded prizes
in the National Competition. Miss Dora K.
Allen and Miss Kathleen Fox were the principal
exhibitors in this section, and the latter, with Miss
E. Rhind and Miss C. O’Brien, showed some
excellent stained glass.

English Lead Work—its Art a?id History. By
Lawrence Weaver, F.S.A. (London: B. T.
Batsford.) 255. net. In this sumptuous volume
of 441 illustrations, mostly photographs specially
taken or acquired for the purpose, the author
chiefly devotes himself to the compilation of
numerous beautiful and characteristic examples of
the art and craft in England, with a general survey
of the principles and motives underlying their crea-
tion. Whilst concerning himself largely with the
antiquarian bearing of the subject, he gives at
intervals some technical information inseparable
from the right and wrong principles of production,
and it is to be regretted that he has not dwelt
at greater length on this bearing of the subject,
the laurels for which he is admittedly content to
leave to Professor Lethaby and Mr. F. W. Troup.

In his description of the old work Mr. Weaver
very rightly and frequently insists on the great value
of simplicity, refinement, and restraint in the design
of the better examples, and still further enforces
these qualities from a constructional point of view.
He dwells at length on the beauty of the earlier
examples and processes of working lead, on the
use of lead by Inigo Jones, and on Sir Christopher
Wren’s “less carefully detailed regard and use of
lead coverings for spires and domes.” He also
accounts for the later day Piccadilly lead industry,
in the production and reproduction of statues,
statuettes, vases, etc., etc., used in garden design,
with an interesting chapter on the modern re-
vival of the art. We notice in his admiration of
Sir Christopher Wren’s “ thought and design of
leadwork on broad lines ” that he is inclined to
scold him for “hisconstant failure in detail.” The
mention of this point rather reminds us of Wren’s
similar bearing towards the plaster decoration of
some of his buildings, in which the same “ neglect
of” and “ constant failure in detail,” the same lack
of the controlling and conventional influence which
architectural knowledge gives to decoration, has
been equally noticeable. Though the author is
not himself a craftsman, his suggestions in many
instances are admirable, and contain much fresh-
ness and vitality that is not always forthcoming
from the humdrum of architectural practice. He
is indeed to be heartily congratulated on the pro-
duction of a work of great interest, sterling merit,
and scholarly knowledge, and one which, as a
standard work of reference, should be in the
possession of all lovers of architecture, and of
the allied arts and crafts. In one respect only
does it give rise to regret. Like others we know
of, this volume is too much limited to English
work, which is but the child of a stately Conti-
nental master-craft, from which it took much of
its inspiration and vitality.

On the Making of Gardens. By Sir George
Sitwell. (London : John Murray.) 5s. net.—
Throughout this book Sir George Sitwell is in
touch with the real secrets of the garden—secrets
which are as elusive as the scents of the garden.
From no book could those who really understand
gardens get greater pleasure or a more sympathetic
touch on the chords which only such readers
know. For ourselves, we have read few books
with such approval. The chapters on the Renais-
sance gardens are true appreciations, and perhaps
when people lived in perilous times the true refuge
of the garden was understood; they were then a
real vehicle of artistic and ideal expression. And