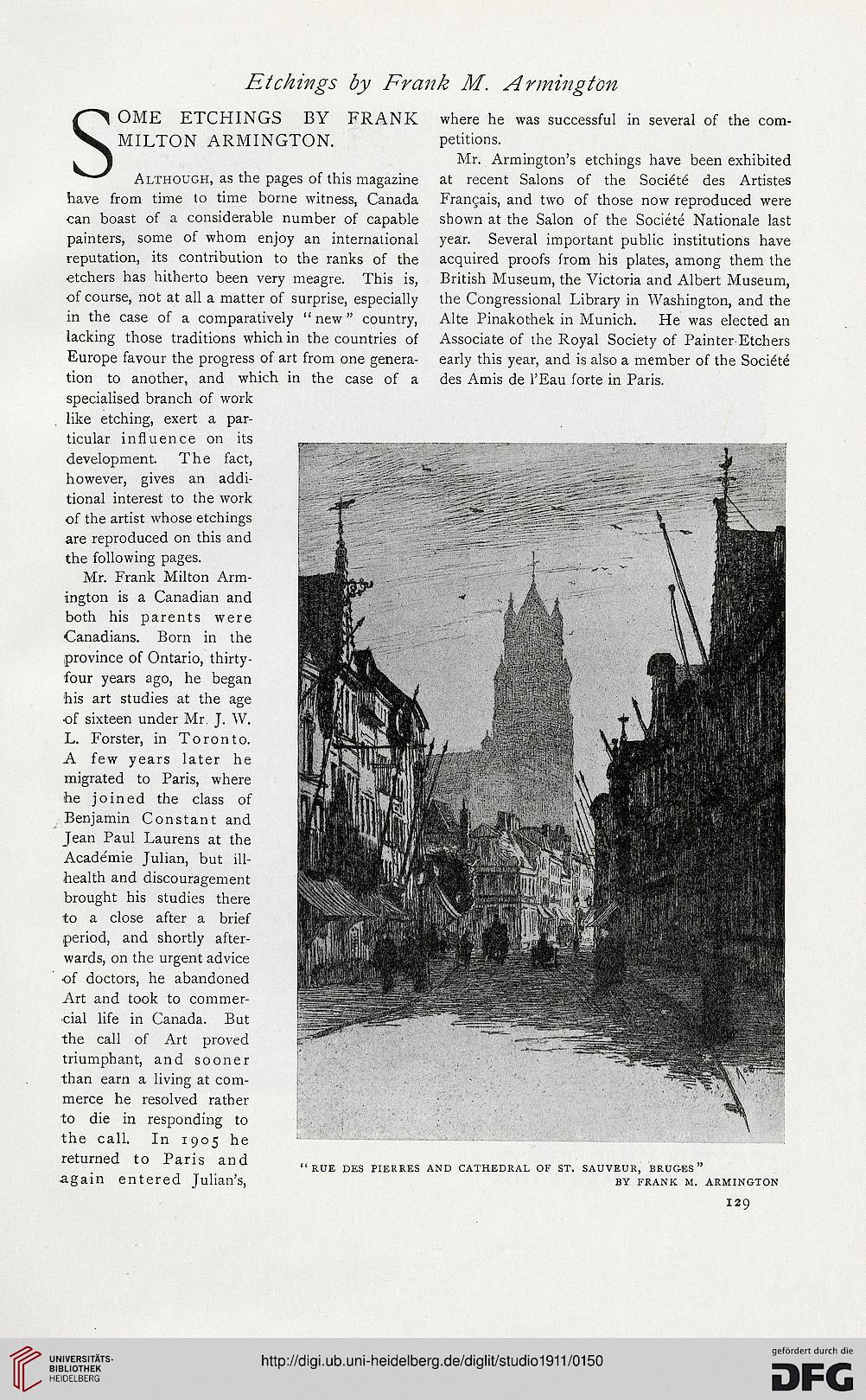 Although, as the pages of this magazine
have from time to time borne witness, Canada
can boast of a considerable number of capable
painters, some of whom enjoy an international
reputation, its contribution to the ranks of the
etchers has hitherto been very meagre. This is,
of course, not at all a matter of surprise, especially
in the case of a comparatively “ new ” country,
lacking those traditions which in the countries of
Europe favour the progress of art from one genera-
tion to another, and which in the case of a
specialised branch of work
like etching, exert a par-
ticular influence on its
development. The fact,
however, gives an addi-
tional interest to the work
of the artist whose etchings
are reproduced on this and
the following pages.

Mr. Frank Milton Arm-
ington is a Canadian and
both his parents were
Canadians. Born in the
province of Ontario, thirty-
four years ago, he began
his art studies at the age
of sixteen under Mr. J. W.

A few years later he
migrated to Paris, where
he joined the class of
Benjamin Constant and
Jean Paul Laurens at the
Acade'mie Julian, but ill-
health and discouragement
brought his studies there
to a close after a brief
period, and shortly after-
wards, on the urgent advice
of doctors, he abandoned
Art and took to commer-
cial life in Canada. But
the call of Art proved
triumphant, and sooner
than earn a living at com-
merce he resolved rather
to die in responding to
the call. In 1905 he
returned to Paris and
again entered Julian’s,

where he was successful in several of the com-
petitions.

Mr. Armington’s etchings have been exhibited
at recent Salons of the Soci6t6 des Artistes
Frangais, and two of those now reproduced were
shown at the Salon of the Societe Nationale last
year. Several important public institutions have
acquired proofs from his plates, among them the
British Museum, the Victoria and Albert Museum,
the Congressional Library in Washington, and the
Alte Pinakothek in Munich. He was elected an
Associate of the Royal Society of Painter Etchers
early this year, and is also a member of the Societe
des Amis de l’Eau forte in Paris.