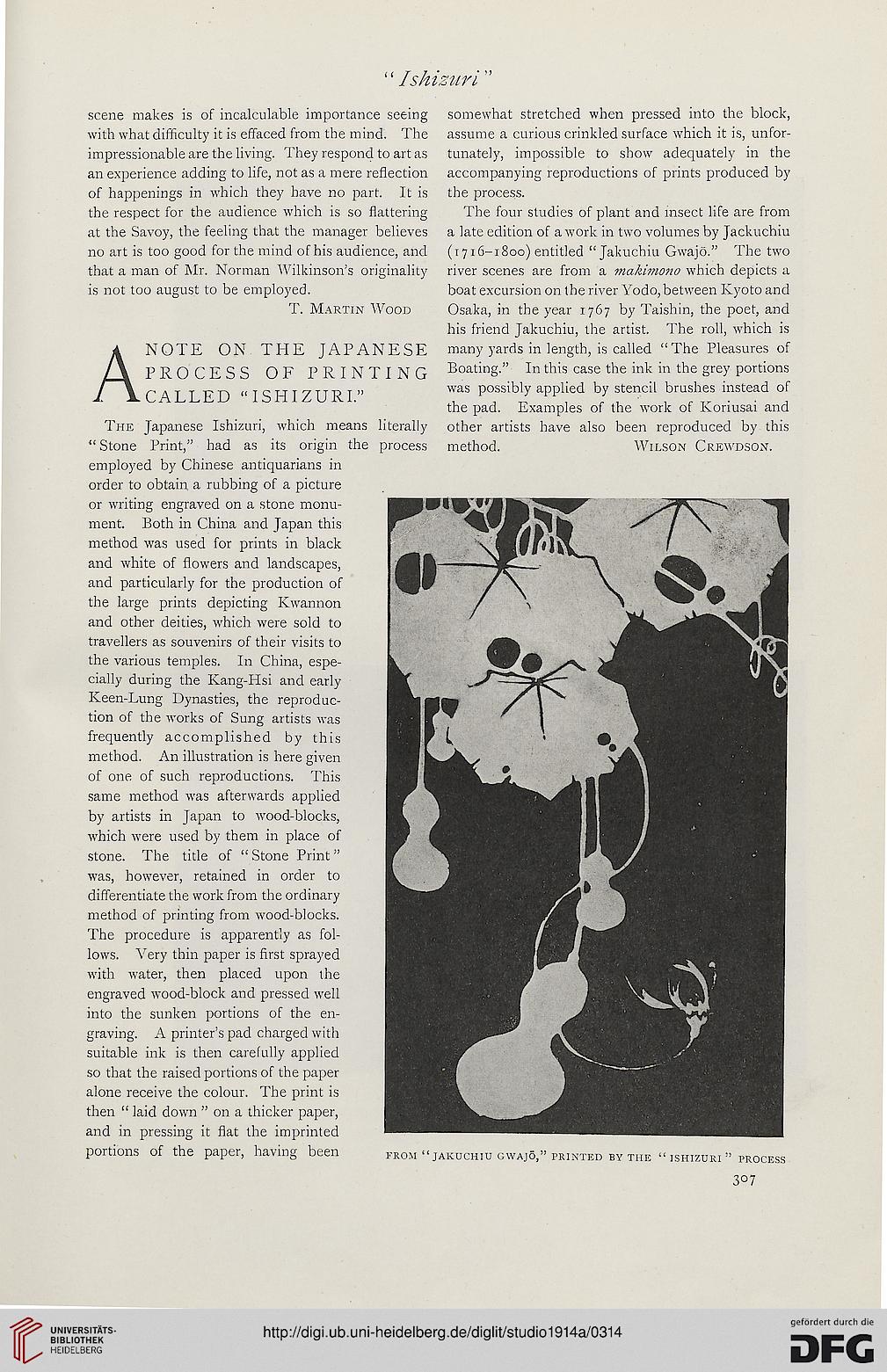 scene makes is of incalculable importance seeing somewhat stretched when pressed into the block,
with what difficulty it is effaced from the mind. The assume a curious crinkled surface which it is, unfor-
impressionable are the living. They respond to art as tunately, impossible to show adequately in the
an experience adding to life, not as a mere reflection accompanying reproductions of prints produced by
of happenings in which they have no part. It is the process.

the respect for the audience which is so flattering The four studies of plant and insect life are from
at the Savoy, the feeling that the manager believes a late edition of a work in two volumes by Jackuchiu
no art is too good for the mind of his audience, and (1716-1800) entitled " Jakuchiu Gwajo." The two
that a man of Mr. Norman Wilkinson's originality river scenes are from a makimono which depicts a
is not too august to be employed. boat excursion on the river Yodo, between Kyoto and

T. Martin Wood Osaka, in the year 1767 by Taishin, the poet, and
his friend Jakuchiu, the artist. The roll, which is

ANOTE ON THE JAPANESE many yards in length, is called "The Pleasures of
PROCESS OF PRINTING Boating." In this case the ink in the grey portions
was possibly applied by stencil brushes instead of
CA.L.LliiJ 1 b ri 1Z, U K. I. it- 1 e .1. 1 c rr • i

the pad. Examples of the work of Konusai and

The Japanese Ishizuri, which means literally other artists have also been reproduced by this
"Stone Print," had as its origin the process method. Wilson Crewdson.

employed by Chinese antiquarians in
order to obtain a rubbing of a picture
or writing engraved on a stone monu-
ment. Both in China and Japan this
method was used for prints in black
and white of flowers and landscapes,
and particularly for the production of
the large prints depicting Kwannon
and other deities, which were sold to
travellers as souvenirs of their visits to
the various temples. In China, espe-
cially during the Kang-Hsi and early
Keen-Lung Dynasties, the reproduc-
tion of the works of Sung artists was
frequently accomplished by this
method. An illustration is here given
of one of such reproductions. This
same method was afterwards applied
by artists in Japan to wood-blocks,
which were used by them in place of
stone. The title of "Stone Print"
was, however, retained in order to
differentiate the work from the ordinary
method of printing from wood-blocks.
The procedure is apparently as fol-
lows. Very thin paper is first sprayed
with water, then placed upon the
engraved wood-block and pressed well
into the sunken portions of the en-
graving. A printer's pad charged with
suitable ink is then carefully applied
so that the raised portions of the paper
alone receive the colour. The print is
then " laid down " on a thicker paper,
and in pressing it flat the imprinted
portions of the paper, having been fr0m "jakuchiu gwajo," printed by the " ishizuri " process