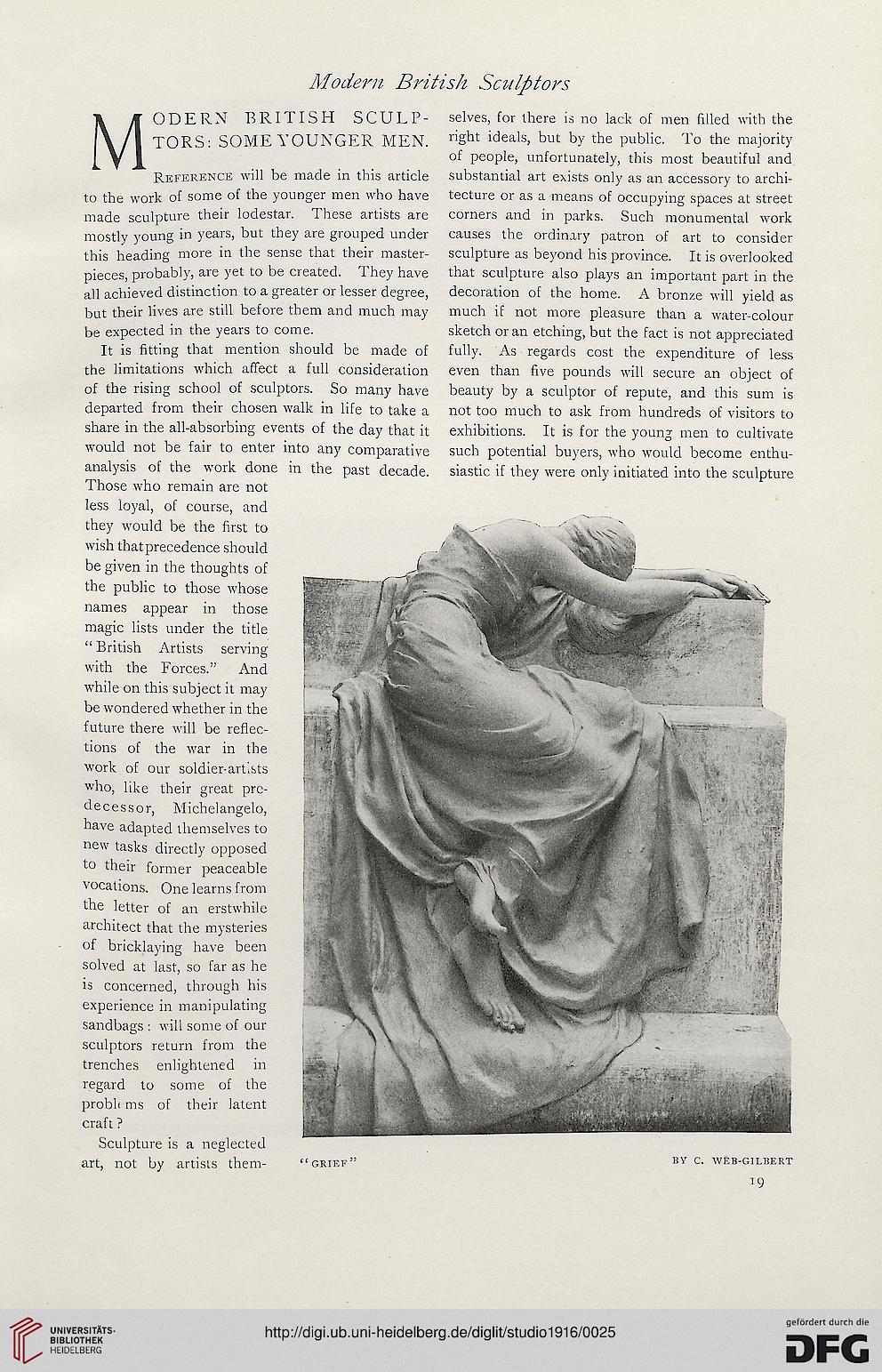 Reference will be made in this article
to the work of some of the younger men who have
made sculpture their lodestar. These artists are
mostly young in years, but they are grouped under
this heading more in the sense that their master-
pieces, probably, are yet to be created. They have
all achieved distinction to a greater or lesser degree,
but their lives are still before them and much may
be expected in the years to come.

It is fitting that mention should be made of
the limitations which affect a full consideration
of the rising school of sculptors. So many have
departed from their chosen walk in life to take a
share in the all-absorbing events of the day that it
would not be fair to enter into any comparative
analysis of the work done in the past decade.
Those who remain are not
less loyal, of course, and
they would be the first to
wish that precedence should
be given in the thoughts of
the public to those whose
names appear in those
magic lists under the title
“ British Artists serving
with the Forces.” And
while on this subject it may
be wondered whether in the
future there will be reflec-
tions of the war in the
work of our soldier-artists
who, like their great pre-
decessor, Michelangelo,
have adapted themselves to
new tasks directly opposed
to their former peaceable
vocations. One learns from
the letter of an erstwhile
architect that the mysteries
of bricklaying have been
solved at last, so far as he
is concerned, through his
experience in manipulating
sandbags : will some of our
sculptors return from the
trenches enlightened in
regard to some of the
probl< ms of their latent
craft ?

Sculpture is a neglected
art, not by artists them-

selves, for there is no lack of men filled with the
right ideals, but by the public. To the majority
of people, unfortunately, this most beautiful and
substantial art exists only as an accessory to archi-
tecture or as a means of occupying spaces at street
corners and in parks. Such monumental work
causes the ordinary patron of art to consider
sculpture as beyond his province. It is overlooked
that sculpture also plays an important part in the
decoration of the home. A bronze will yield as
much if not more pleasure than a water-colour
sketch or an etching, but the fact is not appreciated
fully. As regards cost the expenditure of less
even than five pounds will secure an object of
beauty by a sculptor of repute, and this sum is
not too much to ask from hundreds of visitors to
exhibitions. It is for the young men to cultivate
such potential buyers, who would become enthu-
siastic if they were only initiated into the sculpture