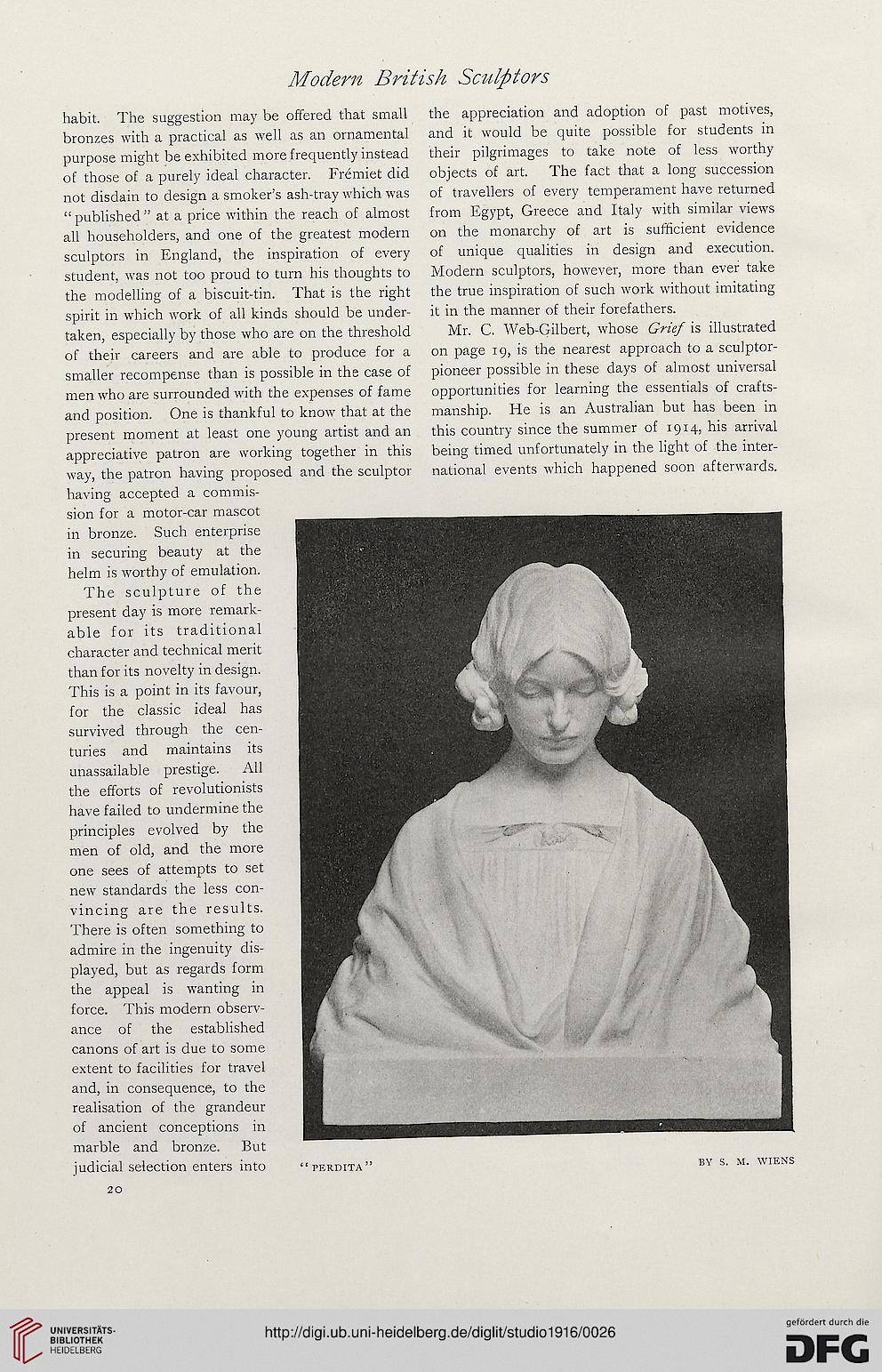 habit. The suggestion may be offered that small
bronzes with a practical as well as an ornamental
purpose might be exhibited more frequently instead
of those of a purely ideal character. Fremiet did
not disdain to design a smoker’s ash-tray which was
“ published ” at a price within the reach of almost
all householders, and one of the greatest modern
sculptors in England, the inspiration of every
student, was not too proud to turn his thoughts to
the modelling of a biscuit-tin. That is the right
spirit in which work of all kinds should be under-
taken, especially by those who are on the threshold
of their careers and are able to produce for a
smaller recompense than is possible in the case of
men who are surrounded with the expenses of fame
and position. One is thankful to know that at the
present moment at least one young artist and an
appreciative patron are working together in this
way, the patron having proposed and the sculptor
having accepted a commis-
sion for a motor-car mascot
in bronze. Such enterprise
in securing beauty at the
helm is worthy of emulation.

The sculpture of the
present day is more remark-
able for its traditional
character and technical merit
than for its novelty in design.

This is a point in its favour,
for the classic ideal has
survived through the cen-
turies and maintains its
unassailable prestige. All
the efforts of revolutionists
have failed to undermine the
principles evolved by the
men of old, and the more
one sees of attempts to set
new standards the less con-
vincing are the results.

There is often something to
admire in the ingenuity dis-
played, but as regards form
the appeal is wanting in
force. This modern observ-
ance of the established
canons of art is due to some
extent to facilities for travel
and, in consequence, to the
realisation of the grandeur
of ancient conceptions in
marble and bronze. But
judicial selection enters into “pf.rdita”

the appreciation and adoption of past motives,
and it would be quite possible for students in
their pilgrimages to take note of less worthy
objects of art. The fact that a long succession
of travellers of every temperament have returned
from Egypt, Greece and Italy with similar views
on the monarchy of art is sufficient evidence
of unique qualities in design and execution.
Modern sculptors, however, more than ever take
the true inspiration of such work without imitating
it in the manner of their forefathers.

Mr. C. Web-Gilbert, whose Grief is illustrated
on page 19, is the nearest approach to a sculptor-
pioneer possible in these days of almost universal
opportunities for learning the essentials of crafts-
manship. He is an Australian but has been in
this country since the summer of 1914, his arrival
being timed unfortunately in the light of the inter-
national events which happened soon afterwards.