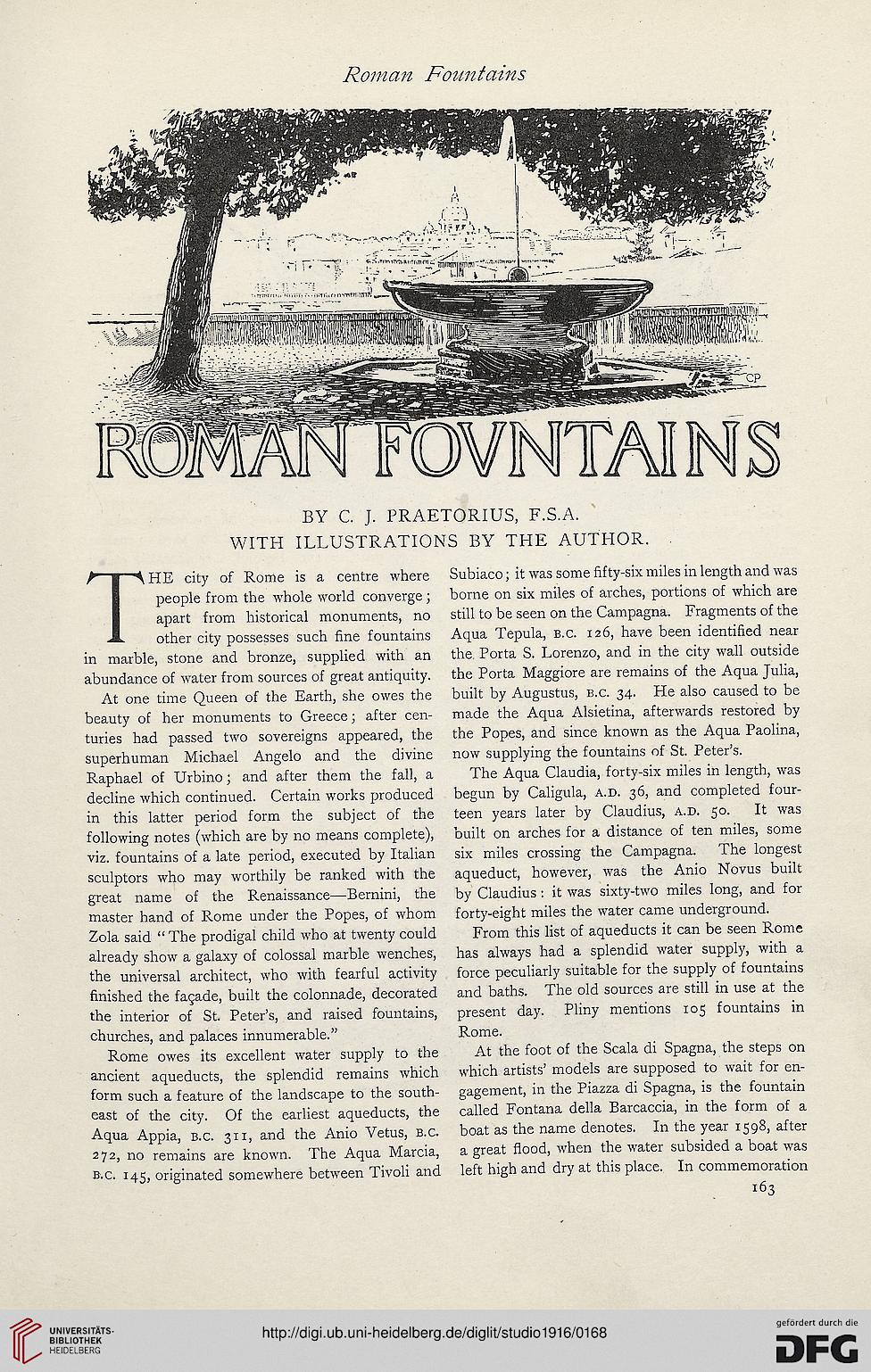 WITH ILLUSTRATIONS BY THE AUTHOR.

THE city of Rome is a centre where
people from the whole world converge;
apart from historical monuments, no
other city possesses such fine fountains
in marble, stone and bronze, supplied with an
abundance of water from sources of great antiquity.

At one time Queen of the Earth, she owes the
beauty of her monuments to Greece; after cen-
turies had passed two sovereigns appeared, the
superhuman Michael Angelo and the divine
Raphael of Urbino; and after them the fall, a
decline which continued. Certain works produced
in this latter period form the subject of the
following notes (which are by no means complete),
viz. fountains of a late period, executed by Italian
sculptors who may worthily be ranked with the
great name of the Renaissance—Bernini, the
master hand of Rome under the Popes, of whom
Zola said “ The prodigal child who at twenty could
already show a galaxy of colossal marble wenches,
the universal architect, who with fearful activity
finished the fagade, built the colonnade, decorated
the interior of St. Peter’s, and raised fountains,
churches, and palaces innumerable.”

Rome owes its excellent water supply to the
ancient aqueducts, the splendid remains which
form such a feature of the landscape to the south-
east of the city. Of the earliest aqueducts, the
Aqua Appia, b.c. 31 i, and the Anio Vetus, B.c.
272, no remains are known. The Aqua Marcia,
b.c. 145, originated somewhere between Tivoli and

Subiaco; it was some fifty-six miles in length and was
borne on six miles of arches, portions of which are
still to be seen on the Campagna. Fragments of the
Aqua Tepula, b.c. 126, have been identified near
the Porta S. Lorenzo, and in the city wall outside
the Porta Maggiore are remains of the Aqua Julia,
built by Augustus, b.c. 34. He also caused to be
made the Aqua Alsietina, afterwards restored by
the Popes, and since known as the Aqua Paolina,
now supplying the fountains of St. Peter’s.

The Aqua Claudia, forty-six miles in length, was
begun by Caligula, a.d. 36, and completed four-
teen years later by Claudius, a.d. 50. It was
built on arches for a distance of ten miles, some
six miles crossing the Campagna. The longest
aqueduct, however, was the Anio Novus built
by Claudius : it was sixty-two miles long, and for
forty-eight miles the water came underground.

From this list of aqueducts it can be seen Rome
has always had a splendid water supply, with a
force peculiarly suitable for the supply of fountains
and baths. The old sources are still in use at the
present day. Pliny mentions 105 fountains in
Rome.

At the foot of the Scala di Spagna, the steps on
which artists’ models are supposed to wait for en-
gagement, in the Piazza di Spagna, is the fountain
called Fontana della Barcaccia, in the form of a
boat as the name denotes. In the year 1598, after
a great flood, when the water subsided a boat was
left high and dry at this place. In commemoration