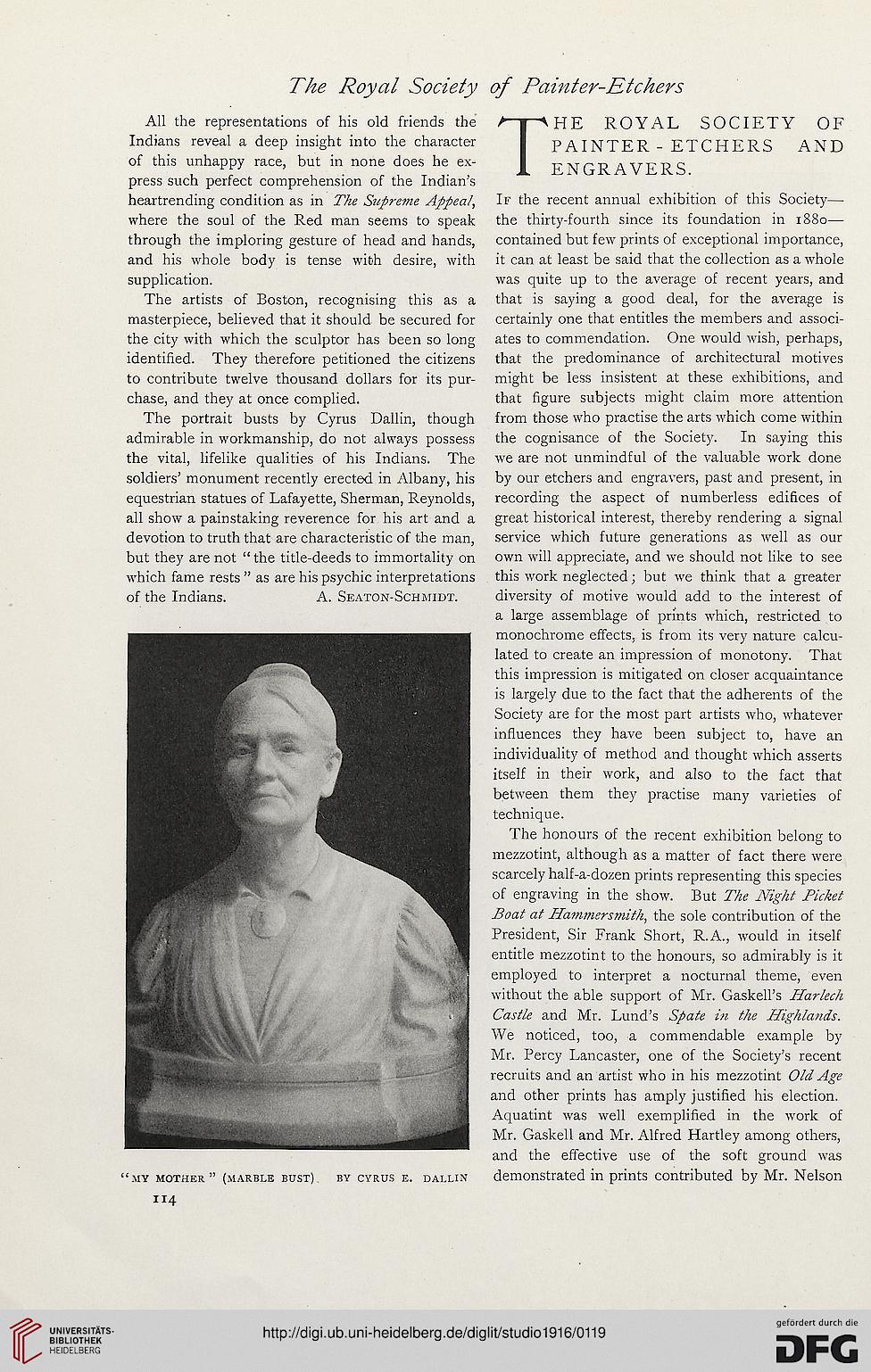 All the representations of his old friends the
Indians reveal a deep insight into the character
of this unhappy race, but in none does he ex-
press such perfect comprehension of the Indian’s
heartrending condition as in The Supreme Appeal,
where the soul of the Red man seems to speak
through the imploring gesture of head and hands,
and his whole body is tense with desire, with
supplication.

The artists of Boston, recognising this as a
masterpiece, believed that it should be secured for
the city with which the sculptor has been so long
identified. They therefore petitioned the citizens
to contribute twelve thousand dollars for its pur-
chase, and they at once complied.

The portrait busts by Cyras Dallin, though
admirable in workmanship, do not always possess
the vital, lifelike qualities of his Indians. The
soldiers’ monument recently erected in Albany, his
equestrian statues of Lafayette, Sherman, Reynolds,
all show a painstaking reverence for his art and a
devotion to truth that are characteristic of the man,
but they are not “ the title-deeds to immortality on
which fame rests ” as are his psychic interpretations
of the Indians. A. Seaton-Schmidt.

The royal society of

If the recent annual exhibition of this Society—
the thirty-fourth since its foundation in 1880—
contained but few prints of exceptional importance,
it can at least be said that the collection as a whole
was quite up to the average of recent years, and
that is saying a good deal, for the average is
certainly one that entitles the members and associ-
ates to commendation. One would wish, perhaps,
that the predominance of architectural motives
might be less insistent at these exhibitions, and
that figure subjects might claim more attention
from those who practise the arts which come within
the cognisance of the Society. In saying this
we are not unmindful of the valuable work done
by our etchers and engravers, past and present, in
recording the aspect of numberless edifices of
great historical interest, thereby rendering a signal
service which future generations as well as our
own will appreciate, and we should not like to see
this work neglected; but we think that a greater
diversity of motive would add to the interest of
a large assemblage of prints which, restricted to
monochrome effects, is from its very nature calcu-
lated to create an impression of monotony. That
this impression is mitigated on closer acquaintance
is largely due to the fact that the adherents of the
Society are for the most part artists who, whatever
influences they have been subject to, have an
individuality of method and thought which asserts
itself in their work, and also to the fact that
between them they practise many varieties of
technique.

The honours of the recent exhibition belong to
mezzotint, although as a matter of fact there were
scarcely half-a-dozen prints representing this species
of engraving in the show. But The Night Picket
Boat at Hammersmith, the sole contribution of the
President, Sir Frank Short, R.A., would in itself
entitle mezzotint to the honours, so admirably is it
employed to interpret a nocturnal theme, even
without the able support of Mr. Gaskell’s Harlech
Castle and Mr. Lund’s Spate in the Highlands.
We noticed, too, a commendable example by
Mr. Percy Lancaster, one of the Society’s recent
recruits and an artist who in his mezzotint Old Age
and other prints has amply justified his election.
Aquatint was well exemplified in the work of
Mr. Gaskell and Mr. Alfred Hartley among others,
and the effective use of the soft ground was
demonstrated in prints contributed by Mr. Nelson