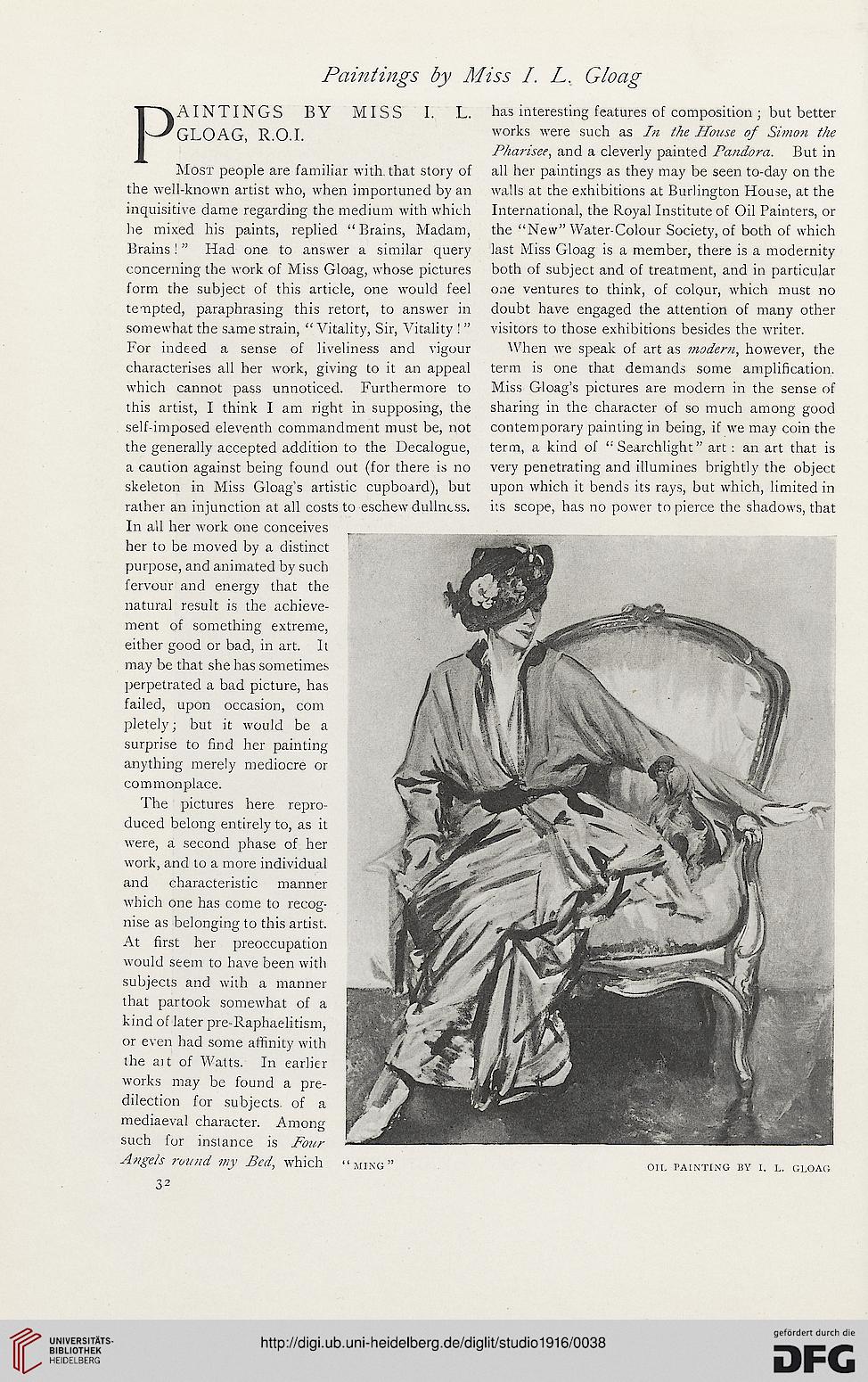 Information about OCR text
Paintings by Miss I. L. Gloag

PAINTINGS BY MISS I. L.

Most people are familiar with, that story of
the well-known artist who, when importuned by an
inquisitive dame regarding the medium with which
he mixed his paints, replied “Brains, Madam,
Brains! ” Had one to answer a similar query
concerning the work of Miss Gloag, whose pictures
form the subject of this article, one would feel
tempted, paraphrasing this retort, to answer in
somewhat the same strain, “ Vitality, Sir, Vitality ! ”
For indeed a sense of liveliness and vigour
characterises all her work, giving to it an appeal
which cannot pass unnoticed. Furthermore to
this artist, I think I am right in supposing, the
self-imposed eleventh commandment must be, not
the generally accepted addition to the Decalogue,
a caution against being found out (for there is no
skeleton in Miss Gloag’s artistic cupboard), but
rather an injunction at all costs to eschew dullness.
In all her work one conceives
her to be moved by a distinct
purpose, and animated by such
fervour and energy that the
natural result is the achieve-
ment of something extreme,
either good or bad, in art. It
may be that she has sometimes
perpetrated a bad picture, has
failed, upon occasion, com
pletely; but it would be a
surprise to find her painting
anything merely mediocre or
commonplace.

The pictures here repro-
duced belong entirely to, as it
were, a second phase of her
work, and to a more individual
and characteristic manner
which one has come to recog-
nise as belonging to this artist.

At first her preoccupation
would seem to have been with
subjects and with a manner
that partook somewhat of a
kind of later pre-Raplmelitism,
or even had some affinity with
the ait of Watts. In earlier
works may be found a pre-
dilection for subjects, of a
mediaeval character. Among
such for instance is Four
Angels round my Bed, which

has interesting features of composition ; but better
works were such as In the Hoitse of Simon the
Pharisee, and a cleverly painted Pandora. But in
all her paintings as they may be seen to-day on the
walls at the exhibitions at Burlington House, at the
International, the Royal Institute of Oil Painters, or
the “New” Water-Colour Society, of both of which
last Miss Gloag is a member, there is a modernity
both of subject and of treatment, and in particular
one ventures to think, of colour, which must no
doubt have engaged the attention of many other
visitors to those exhibitions besides the writer.

When we speak of art as modern, however, the
term is one that demands some amplification.
Miss Gloag’s pictures are modern in the sense of
sharing in the character of so much among good
contemporary painting in being, if we may coin the
term, a kind of “ Searchlight” art : an art that is
very penetrating and illumines brightly the object
upon which it bends its rays, but which, limited in
hs scope, has no power to pierce the shadows, that

OIL TAINTING BY I. L. GLOAG