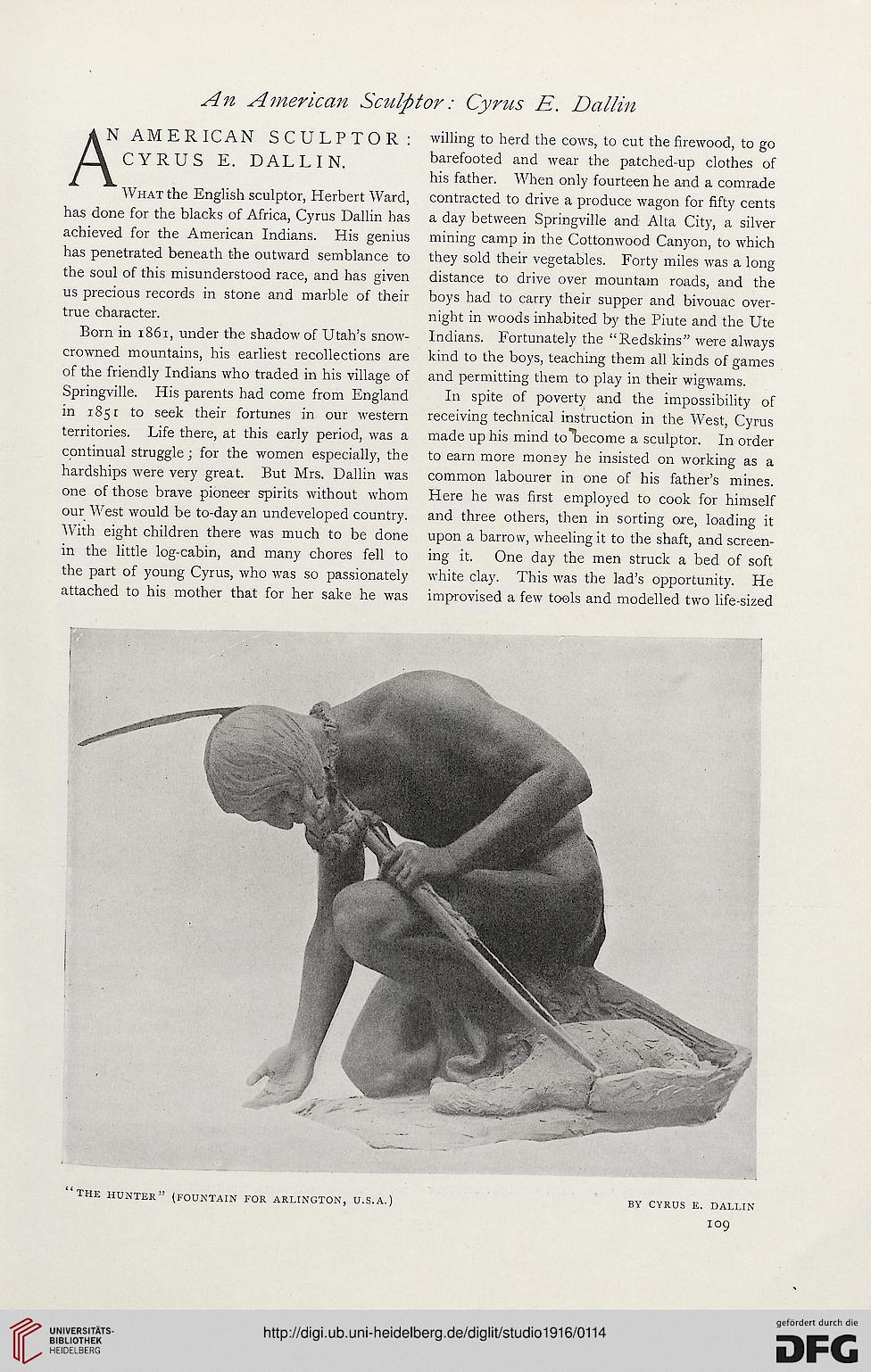 What the English sculptor, Herbert Ward,
has done for the blacks of Africa, Cyrus Dallin has
achieved for the American Indians. His genius
has penetrated beneath the outward semblance to
the soul of this misunderstood race, and has given
us precious records in stone and marble of their
true character.

Born in 1861, under the shadow of Utah’s snow-
crowned mountains, his earliest recollections are
of the friendly Indians who traded in his village of
Springville. His parents had come from England
in 185 c to seek their fortunes in our western
territories. Life there, at this early period, was a
continual struggle; for the women especially, the
hardships were very great. But Mrs. Dallin was
one of those brave pioneer spirits without whom
our West would be to-day an undeveloped country.
With eight children there -was much to be done
in the little log-cabin, and many chores fell to
the part of young Cyrus, who was so passionately
attached to his mother that for her sake he was

willing to herd the cows, to cut the firewood, to go
barefooted and wear the patched-up clothes of
his father. When only fourteen he and a comrade
contracted to drive a produce wagon for fifty cents
a day between Springville and Alta City, a silver
mining camp in the Cottonwood Canyon, to which
they sold their vegetables. Forty miles was a long
distance to drive over mountain roads, and the
boys had to carry their supper and bivouac over-
night in woods inhabited by the Piute and the Ute
Indians. Fortunately the “Redskins” were always
kind to the boys, teaching them all kinds of games
and permitting them to play in their wigwams.

In spite of poverty and the impossibility of
receiving technical instruction in the West, Cyrus
made up his mind toTjecome a sculptor. In order
to earn more money he insisted on working as a
common labourer in one of his father’s mines.
Here he was first employed to cook for himself
and three others, then in sorting ore, loading it
upon a barrow, wheeling it to the shaft, and screen-
ing it. One day the men struck a bed of soft
white clay. This was the lad’s opportunity. He
improvised a few tools and modelled two life-sized