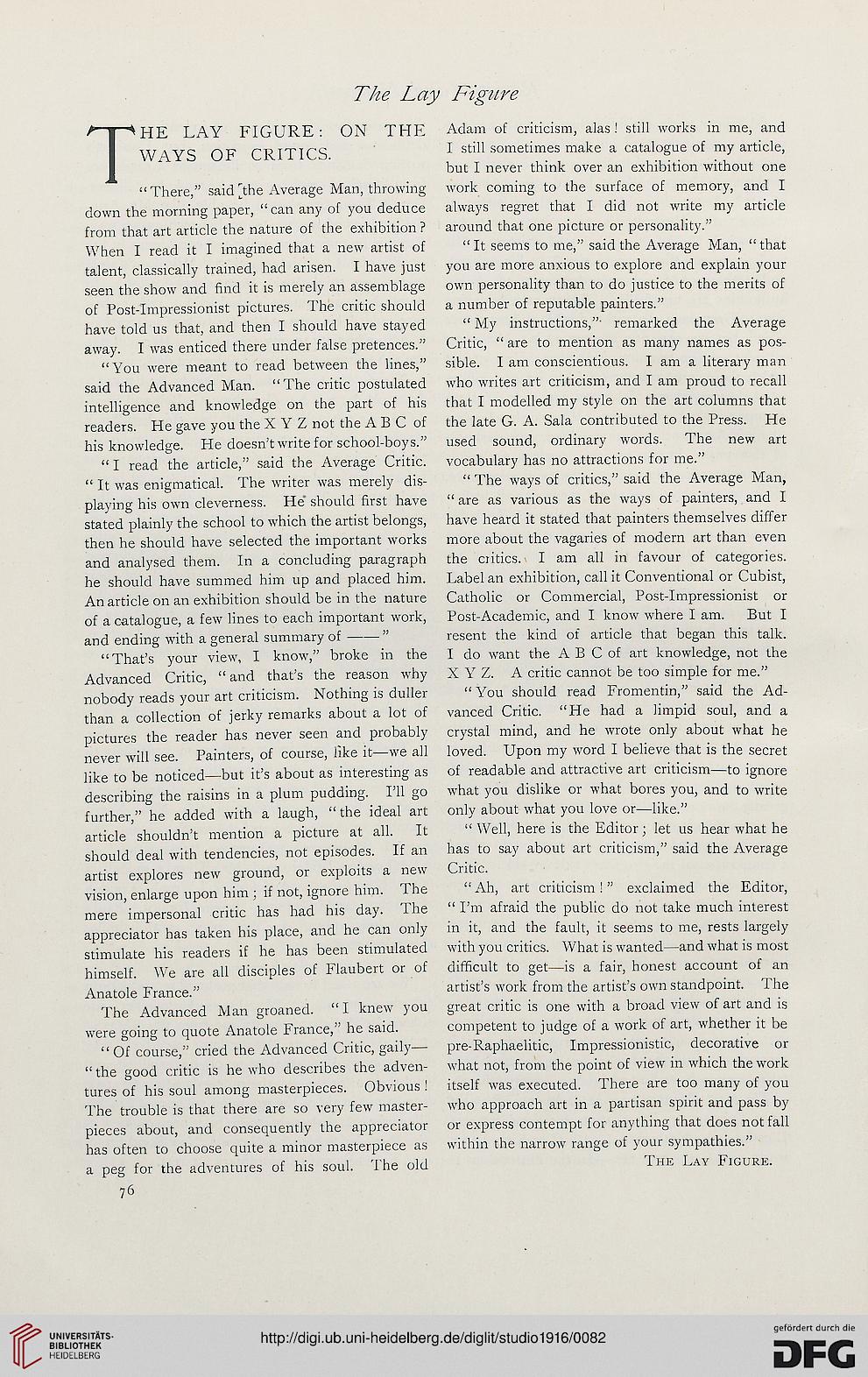 THE LAY FIGURE: ON THE
WAYS OF CRITICS.

“There,” said ^the Average Man, throwing
down the morning paper, “ can any of you deduce
from that art article the nature of the exhibition ?
When I read it I imagined that a new artist of
talent, classically trained, had arisen. I have just
seen the show and find it is merely an assemblage
of Post-Impressionist pictures. The critic should
have told us that, and then I should have stayed
away. I was enticed there under false pretences.”
“You were meant to read between the lines,”
said the Advanced Man. “The critic postulated
intelligence and knowledge on the part of his
readers. He gave you the X Y Z not the A B C of
his knowledge. He doesn’t write for school-boys.”
“ I read the article,” said the Average Critic.
“ It was enigmatical. The writer was merely dis-
playing his own cleverness. He" should first have
stated plainly the school to which the artist belongs,
then he should have selected the important works
and analysed them. In a concluding paragraph
he should have summed him up and placed him.
An article on an exhibition should be in the nature
of a catalogue, a few lines to each important work,

and ending with a general summary of-”

“That’s your view, I know,” broke in the
Advanced Critic, “and that’s the reason why
nobody reads your art criticism. Nothing is duller
than a collection of jerky remarks about a lot of
pictures the reader has never seen and probably
never will see. Painters, of course, like it—we all
like to be noticed—but it’s about as interesting as
describing the raisins in a plum pudding. I’ll go
further,” he added with a laugh, “the ideal art
article shouldn’t mention a picture at all. It
should deal with tendencies, not episodes. If an
artist explores new ground, or exploits a new
vision, enlarge upon him ; if not, ignore him. I he
mere impersonal critic has had his day. Ihe
appreciator has taken his place, and he can only
stimulate his readers if he has been stimulated
himself. We are all disciples of Flaubert or of
Anatole France.”

The Advanced Man groaned. “ I knew you
were going to quote Anatole France,” he said.

“ the good critic is he who describes the adven-
tures of his soul among masterpieces. Obvious !
The trouble is that there are so very few master-
pieces about, and consequently the appreciator
has often to choose quite a minor masterpiece as
a peg for the adventures of his soul. The old
76

Adam of criticism, alas ! still works in me, and
I still sometimes make a catalogue of my article,
but I never think over an exhibition without one
work coming to the surface of memory, and I
always regret that I did not write my article
around that one picture or personality.”

“ It seems to me,” said the Average Man, “ that
you are more anxious to explore and explain your
own personality than to do justice to the merits of
a number of reputable painters.”

“ My instructions,”' remarked the Average
Critic, “ are to mention as many names as pos-
sible. I am conscientious. I am a literary man
who writes art criticism, and I am proud to recall
that I modelled my style on the art columns that
the late G. A. Sala contributed to the Press. He
used sound, ordinary words. The new art
vocabulary has no attractions for me.”

“ The ways of critics,” said the Average Man,
“ are as various as the ways of painters, and I
have heard it stated that painters themselves differ
more about the vagaries of modern art than even
the critics. I am all in favour of categories.
Label an exhibition, call it Conventional or Cubist,
Catholic or Commercial, Post-Impressionist or
Post-Academic, and I know where I am. But I
resent the kind of article that began this talk.
I do want the A B C of art knowledge, not the
X Y Z. A critic cannot be too simple for me.”

“ You should read Fromentin,” said the Ad-
vanced Critic. “He had a limpid soul, and a
crystal mind, and he wrote only about what he
loved. Upon my word I believe that is the secret
of readable and attractive art criticism—to ignore
what you dislike or what bores you, and to write
only about what you love or—like.”

“ Well, here is the Editor; let us hear what he
has to say about art criticism,” said the Average
Critic.

“ Ah, art criticism! ” exclaimed the Editor,
“ I’m afraid the public do not take much interest
in it, and the fault, it seems to me, rests largely
with you critics. What is wanted—and what is most
difficult to get—is a fair, honest account of an
artist’s work from the artist’s own standpoint. The
great critic is one with a broad view of art and is
competent to judge of a work of art, whether it be
pre-Raphaelitic, Impressionistic, decorative or
what not, from the point of view in which the work
itself was executed. There are too many of you
who approach art in a partisan spirit and pass by
or express contempt for anything that does not fall
within the narrow range of your sympathies.”