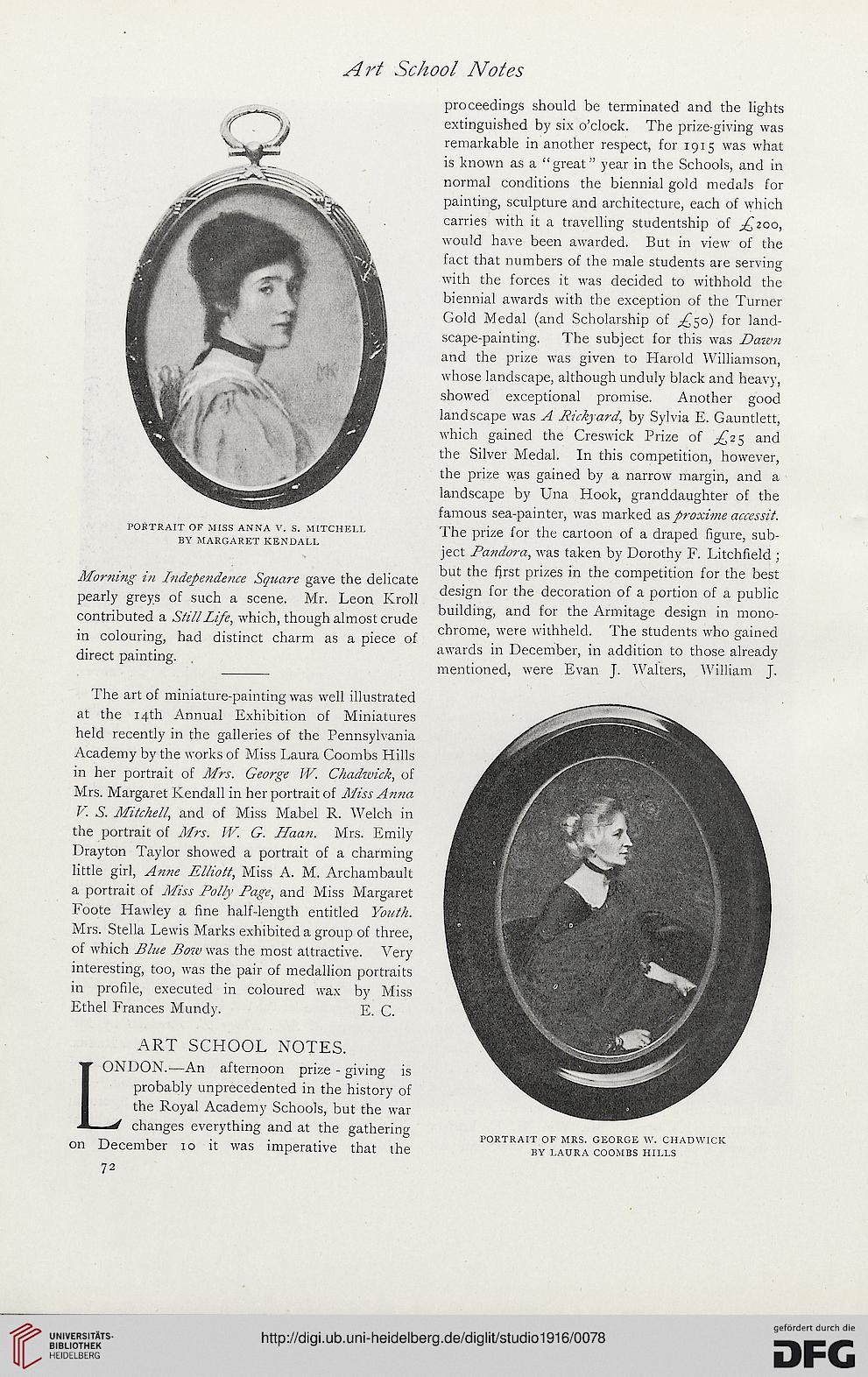 Morning in Independence Square gave the delicate
pearly greys of such a scene. Mr. Leon Kroll
contributed a Still Life, which, though almost crude
in colouring, had distinct charm as a piece of
direct painting.

The art of miniature-painting was well illustrated
at the 14th Annual Exhibition of Miniatures
held recently in the galleries of the Pennsylvania
Academy by the works of Miss Laura Coombs Hills
in her portrait of Mrs. George IV. Chadwick, of
Mrs. Margaret Kendall in her portrait of Miss Anna
V. S. Mitchell, and of Miss Mabel R. Welch in
the portrait of Mrs. TV. G. Haan. Mrs. Emily
Drayton Taylor showed a portrait of a charming
little girl, Anne Elliott, Miss A. M. Archambault
a portrait of Miss Polly Page, and Miss Margaret
Foote Hawley a fine half-length entitled Youth.
Mrs. Stella Lewis Marks exhibited a group of three,
of which Blue Bow was the most attractive. Very
interesting, too, was the pair of medallion portraits
in profile, executed in coloured wax by Miss
Ethel Frances Mundy. E. C.

LONDON.—An afternoon prize - giving is
probably unprecedented in the history of
the Royal Academy Schools, but the war
changes everything and at the gathering
on December 10 it was imperative that the
72

proceedings should be terminated and the lights
extinguished by six o’clock. The prize-giving was
remarkable in another respect, for 1915 was what
is known as a “great” year in the Schools, and in
normal conditions the biennial gold medals for
painting, sculpture and architecture, each of which
carries with it a travelling studentship of jQ200,
would have been awarded. But in view of the
fact that numbers of the male students are serving
with the forces it was decided to withhold the
biennial awards with the exception of the Turner
Gold Medal (and Scholarship of .^50) for land-
scape-painting. The subject for this was Dawn
and the prize was given to Harold Williamson,
whose landscape, although unduly black and heavy,
showed exceptional promise. Another good
landscape was A Bickyard, by Sylvia E. Gauntlett,
which gained the Creswick Prize of 25 and
the Silver Medal. In this competition, however,
the prize was gained by a narrow margin, and a
landscape by Una Hook, granddaughter of the
famous sea-painter, was marked as proxime accessit.
The prize for the cartoon of a draped figure, sub-
ject Pandora, was taken by Dorothy F. Litchfield ;
but the first prizes in the competition for the best
design for the decoration of a portion of a public
building, and for the Armitage design in mono-
chrome, were withheld. The students who gained
awards in December, in addition to those already
mentioned, were Evan J. Walters, William J.