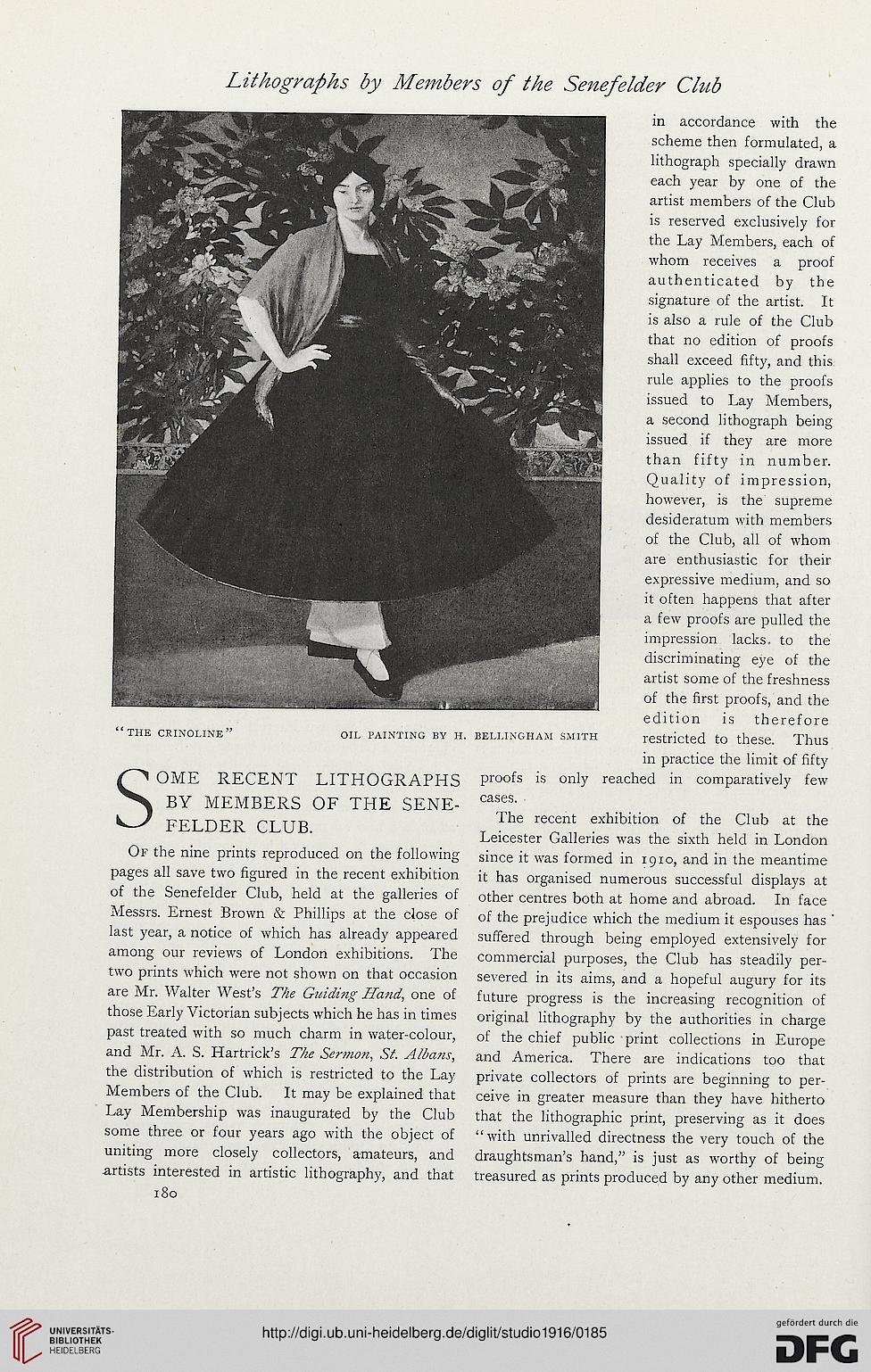 Information about OCR text
Lithographs by Members of the Senefelder Club

SOME RECENT LITHOGRAPHS
BY MEMBERS OF THE SENE-
FELDER CLUB.

Of the nine prints reproduced on the following
pages all save two figured in the recent exhibition
of the Senefelder Club, held at the galleries of
Messrs. Ernest Brown & Phillips at the close of
last year, a notice of which has already appeared
among our reviews of London exhibitions. The
two prints which were not shown on that occasion
are Mr. Walter West’s The Guiding Hand., one of
those Early Victorian subjects which he has in times
past treated with so much charm in water-colour,
and Mr. A. S. Hartrick’s The Sermon, St. Albans,
the distribution of which is restricted to the Lay
Members of the Club. It may be explained that
Lay Membership was inaugurated by the Club
some three or four years ago with the object of
uniting more closely collectors, amateurs, and
artists interested in artistic lithography, and that
180

in accordance with the
scheme then formulated, a
lithograph specially drawn
each year by one of the
artist members of the Club
is reserved exclusively for
the Lay Members, each of
whom receives a proof
authenticated by the
signature of the artist. It
is also a rule of the Club
that no edition of proofs
shall exceed fifty, and this
rule applies to the proofs
issued to Lay Members,
a second lithograph being
issued if they are more
than fifty in number.
Quality of impression,
however, is the supreme
desideratum with members
of the Club, all of whom
are enthusiastic for their
expressive medium, and so
it often happens that after
a few proofs are pulled the
impression lacks, to the
discriminating eye of the
artist some of the freshness
of the first proofs, and the
edition is therefore
restricted to these. Thus
in practice the limit of fifty
proofs is only reached in comparatively few
cases.

The recent exhibition of the Club at the
Leicester Galleries was the sixth held in London
since it was formed in 1910, and in the meantime
it has organised numerous successful displays at
other centres both at home and abroad. In face
of the prejudice which the medium it espouses has
suffered through being employed extensively for
commercial purposes, the Club has steadily per-
severed in its aims, and a hopeful augury for its
future progress is the increasing recognition of
original lithography by the authorities in charge
of the chief public print collections in Europe
and America. There are indications too that
private collectors of prints are beginning to per-
ceive in greater measure than they have hitherto
that the lithographic print, preserving as it does
“with unrivalled directness the very touch of the
draughtsman’s hand,” is just as worthy of being
treasured as prints produced by any other medium.