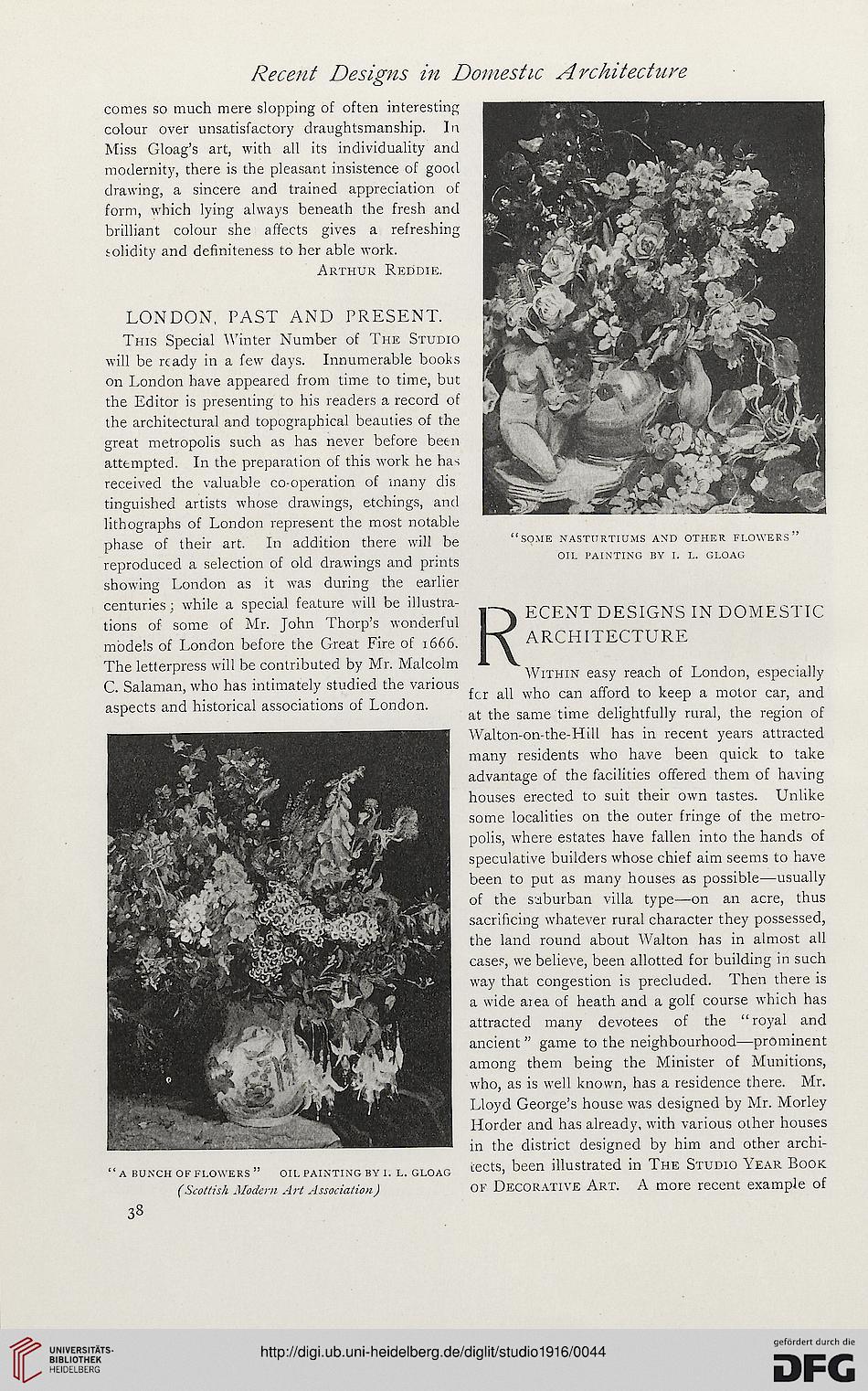 comes so much mere slopping of often interesting
colour over unsatisfactory draughtsmanship. In
Miss Gloag’s art, with all its individuality and
modernity, there is the pleasant insistence of good
drawing, a sincere and trained appreciation of
form, which lying always beneath the fresh and
brilliant colour she affects gives a refreshing
solidity and definiteness to her able work.

LONDON. PAST AND PRESENT.

This Special Winter Number of The Studio
will be ready in a few days. Innumerable books
on London have appeared from time to time, but
the Editor is presenting to his readers a record of
the architectural and topographical beauties of the
great metropolis such as has never before been
attempted. In the preparation of this work he has
received the valuable co-operation of many dis
tinguished artists whose drawings, etchings, and
lithographs of London represent the most notable
phase of their art. In addition there will be
reproduced a selection of old drawings and prints
showing London as it was during the earlier
centuries; while a special feature will be illustra-
tions of some of Mr. John Thorp’s wonderful
models of London before the Great Fire of 1666.
The letterpress will be contributed by Mr. Malcolm
C. Salaman, who has intimately studied the various
aspects and historical associations of London.

“a BUNCH OF FLOWERS ” OIL PAINTING BY I. L. GLOAG

“SOME NASTURTIUMS AND OTHER FLOWERS”
OIL PAINTING BY I. L. GLOAG

Within easy reach of London, especially
fer all who can afford to keep a motor car, and
at the same time delightfully rural, the region of
Walton-on-the-Hill has in recent years attracted
many residents who have been quick to take
advantage of the facilities offered them of having
houses erected to suit their own tastes. Unlike
some localities on the outer fringe of the metro-
polis, where estates have fallen into the hands of
speculative builders whose chief aim seems to have
been to put as many houses as possible—usually
of the suburban villa type—on an acre, thus
sacrificing whatever rural character they possessed,
the land round about Walton has in almost all
cases, we believe, been allotted for building in such
way that congestion is precluded. Then there is
a wide area of heath and a golf course which has
attracted many devotees of the “ royal and
ancient ” game to the neighbourhood—prominent
among them being the Minister of Munitions,
who, as is well known, has a residence there. Mr.
Lloyd George’s house was designed by Mr. Morley
Horder and has already, with various other houses
in the district designed by him and other archi-
tects, been illustrated in The Studio Year Book
of Decorative Art. A more recent example of