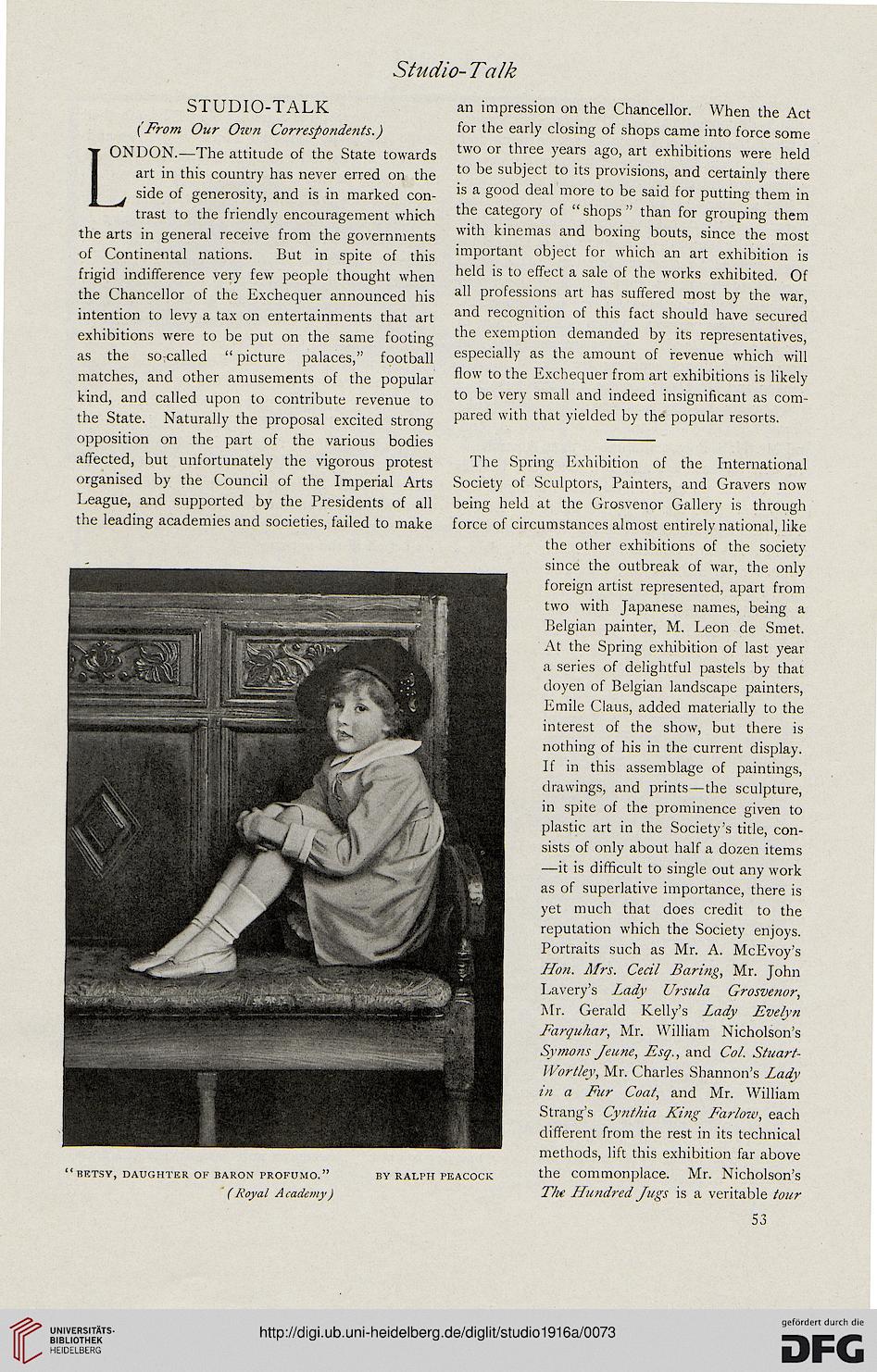 STUDIO-TALK an impression on the Chancellor. When the Act

(From Our Own Correspondents.) for lhe early closing of shops came into force some

LONDON.-The attitude of the State towards two or three >'ears aS°> art exhibitions were held
art in this country has never erred on the t0 be subJect t0 lts Provisions, and certainly there
. side of generosity, and is in marked con- 15 a Sood deal more t0 be sald for PuttinS *™ in
trast to the friendly encouragement which the category of "shops" than for grouping them
the arts in general receive from the governments with kmemas and boxing bouts, since the most
of Continental nations. But in spite of this important object for which an art exhibition is
frigid indifference very few people thought when held 15 to effect a sale of the works exhibited. Of
the Chancellor of the Exchequer announced his a11 professions art has suffered most by the war,
intention to levy a tax on entertainments that art and recognition of this fact should have secured
exhibitions were to be put on the same footing the exemption demanded by its representatives,
as the so-called " picture palaces," football especially as the amount of revenue which will
matches, and other amusements of the popular flow t0 the Exchequer from art exhibitions is likely
kind, and called upon to contribute revenue to t0 be ver>' sma11 and lndeed insignificant as com-
the State. Naturally the proposal excited strong Pared mth that >',elde(1 b? the P°Pular resorts-
opposition on the part of the various bodies

affected, but unfortunately the vigorous protest The Spring Exhibition of the International
organised by the Council of the Imperial Arts Society of Sculptors, Painters, and Gravers now
League, and supported by the Presidents of all being held at the Grosvenor Gallery is through
the leading academies and societies, failed to make force of circumstances almost entirely national, like

the other exhibitions of the society
since the outbreak of war, the only
foreign artist represented, apart from
two with Japanese names, being a
Belgian painter, M. Leon de Smet.
At the Spring exhibition of last year
a series of delightful pastels by that
doyen of Belgian landscape painters,
Emile Claus, added materially to the
interest of the show, but there is
nothing of his in the current display.
If in this assemblage of paintings,
drawings, and prints—the sculpture,
in spite of the prominence given to
plastic art in the Society's title, con-
sists of only about half a dozen items
—it is difficult to single out any work
as of superlative importance, there is
yet much that does credit to the
reputation which the Society enjoys.
Portraits such as Mr. A. McEvoy's
Hon. Mrs. Cecil Baring, Mr. John
Lavery's Lady Ursula Grosvenor,
Mr. Gerald Kelly's Lady Evelyn
Farquhar, Mr. William Nicholson's
Symons Jeune, Esq., and Col. Stuart-
IVortley, Mr. Charles Shannon's Lady
in a Fur Coat, and Mr. William
Strang's Cynthia King Farlow, each
different from the rest in its technical
methods, lift this exhibition far above
1 brtsy, daughter of baron profumo." by ralph peacock the commonplace. Mr. Nicholson's

(Royal Academy) The Hundred Jugs is a veritable tour