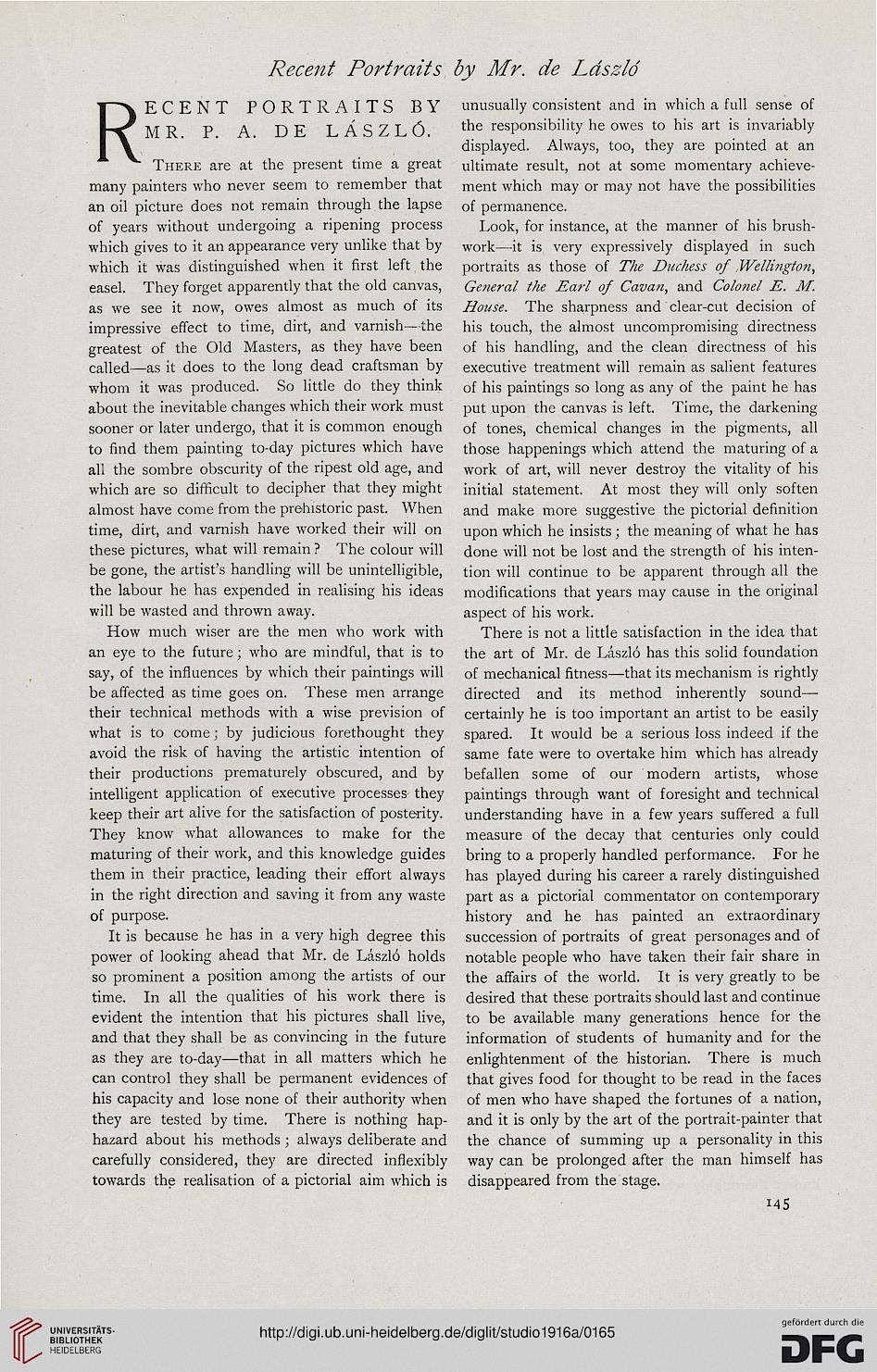 RECENT PORTRAITS BY
MR. P. A. DE L A S Z L 6.
There are at the present time a great
many painters who never seem to remember that
an oil picture does not remain through the lapse
of years without undergoing a ripening process
which gives to it an appearance very unlike that by
which it was distinguished when it first left the
easel. They forget apparently that the old canvas,
as we see it now, owes almost as much of its
impressive effect to time, dirt, and varnish—the
greatest of the Old Masters, as they have been
called—as it does to the long dead craftsman by
whom it was produced. So little do they think
about the inevitable changes which their work must
sooner or later undergo, that it is common enough
to find them painting to-day pictures which have
all the sombre obscurity of the ripest old age, and
which are so difficult to decipher that they might
almost have come from the prehistoric past. When
time, dirt, and varnish have worked their will on
these pictures, what will remain ? The colour will
be gone, the artist's handling will be unintelligible,
the labour he has expended in realising his ideas
will be wasted and thrown away.

How much wiser are the men who work with
an eye to the future; who are mindful, that is to
say, of the influences by which their paintings will
be affected as time goes on. These men arrange
their technical methods with a wise prevision of
what is to come; by judicious forethought they
avoid the risk of having the artistic intention of
their productions prematurely obscured, and by
intelligent application of executive processes they
keep their art alive for the satisfaction of posterity.
They know what allowances to make for the
maturing of their work, and this knowledge guides
them in their practice, leading their effort always
in the right direction and saving it from any waste
of purpose.

It is because he has in a very high degree this
power of looking ahead that Mr. de Laszl6 holds
so prominent a position among the artists of our
time. In all the qualities of his work there is
evident the intention that his pictures shall live,
and that they shall be as convincing in the future
as they are to-day—that in all matters which he
can control they shall be permanent evidences of
his capacity and lose none of their authority when
they are tested by time. There is nothing hap-
hazard about his methods ; always deliberate and
carefully considered, they are directed inflexibly
towards the realisation of a pictorial aim which is

unusually consistent and in which a full sense of
the responsibility he owes to his art is invariably
displayed. Always, too, they are pointed at an
ultimate result, not at some momentary achieve-
ment which may or may not have the possibilities
of permanence.

Look, for instance, at the manner of his brush-
work—it is very expressively displayed in such
portraits as those of The Duchess of Wellington,
General the Earl of Cavan, and Colonel IS. M.
House. The sharpness and clear-cut decision of
his touch, the almost uncompromising directness
of his handling, and the clean directness of his
executive treatment will remain as salient features
of his paintings so long as any of the paint he has
put upon the canvas is left. Time, the darkening
of tones, chemical changes in the pigments, all
those happenings which attend the maturing of a
work of art, will never destroy the vitality of his
initial statement. At most they will only soften
and make more suggestive the pictorial definition
upon which he insists ; the meaning of what he has
done will not be lost and the strength of his inten-
tion will continue to be apparent through all the
modifications that years may cause in the original
aspect of his work.

There is not a little satisfaction in the idea that
the art of Mr. de Laszlo has this solid foundation
of mechanical fitness—that its mechanism is rightly
directed and its method inherently sound—
certainly he is too important an artist to be easily
spared. It would be a serious loss indeed if the
same fate were to overtake him which has already
befallen some of our modern artists, whose
paintings through want of foresight and technical
understanding have in a few years suffered a full
measure of the decay that centuries only could
bring to a properly handled performance. For he
has played during his career a rarely distinguished
part as a pictorial commentator on contemporary
history and he has painted an extraordinary
succession of portraits of great personages and of
notable people who have taken their fair share in
the affairs of the world. It is very greatly to be
desired that these portraits should last and continue
to be available many generations hence for the
information of students of humanity and for the
enlightenment of the historian. There is much
that gives food for thought to be read in the faces
of men who have shaped the fortunes of a nation,
and it is only by the art of the portrait-painter that
the chance of summing up a personality in this
way can be prolonged after the man himself has
disappeared from the stage.