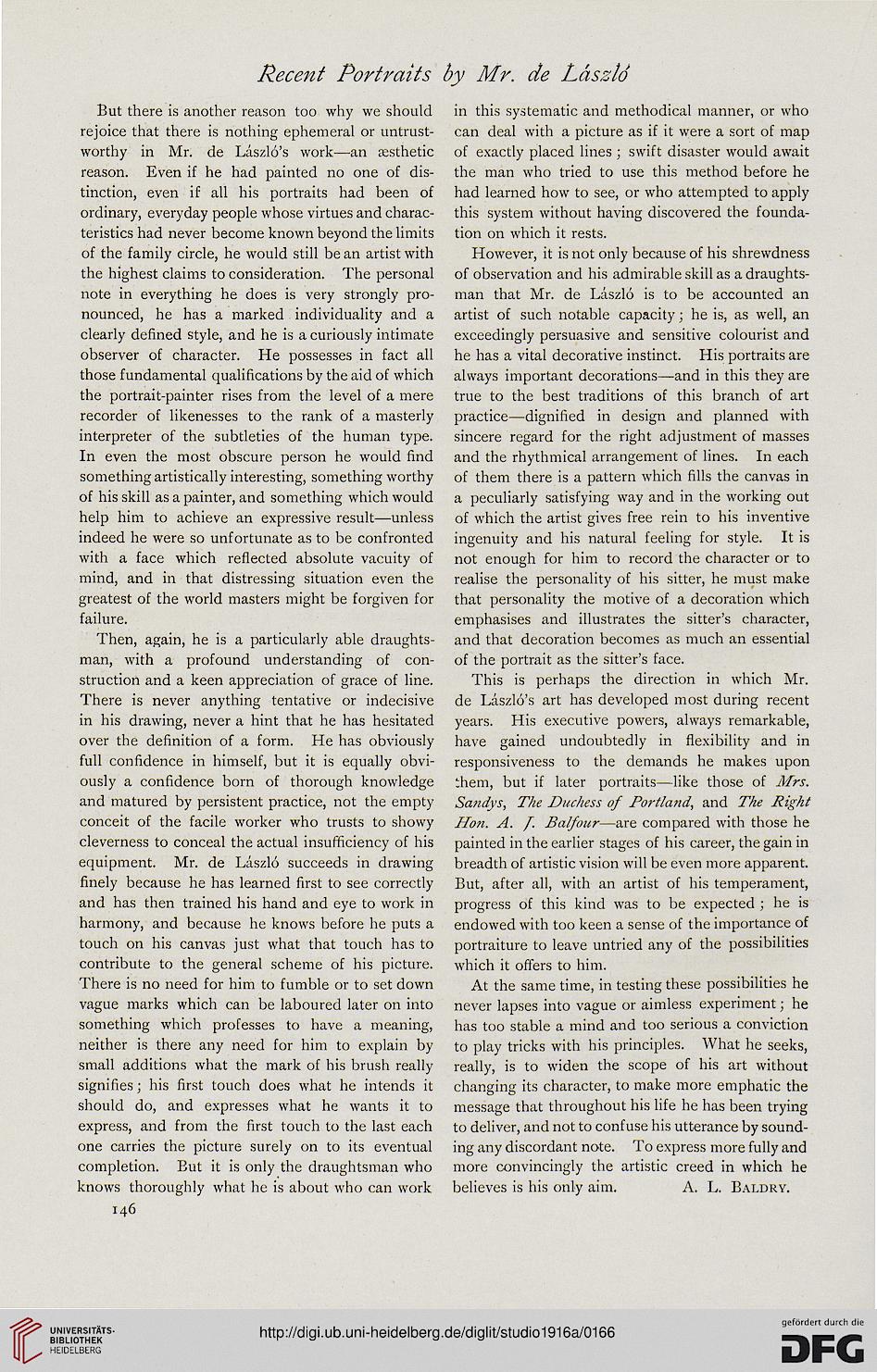 But there is another reason too why we should
rejoice that there is nothing ephemeral or untrust-
worthy in Mr. de Laszlo's work—an aesthetic
reason. Even if he had painted no one of dis-
tinction, even if all his portraits had been of
ordinary, everyday people whose virtues and charac-
teristics had never become known beyond the limits
of the family circle, he would still be an artist with
the highest claims to consideration. The personal
note in everything he does is very strongly pro-
nounced, he has a marked individuality and a
clearly defined style, and he is a curiously intimate
observer of character. He possesses in fact all
those fundamental qualifications by the aid of which
the portrait-painter rises from the level of a mere
recorder of likenesses to the rank of a masterly
interpreter of the subtleties of the human type.
In even the most obscure person he would find
something artistically interesting, something worthy
of his skill as a painter, and something which would
help him to achieve an expressive result—unless
indeed he were so unfortunate as to be confronted
with a face which reflected absolute vacuity of
mind, and in that distressing situation even the
greatest of the world masters might be forgiven for
failure.

Then, again, he is a particularly able draughts-
man, with a profound understanding of con-
struction and a keen appreciation of grace of line.
There is never anything tentative or indecisive
in his drawing, never a hint that he has hesitated
over the definition of a form. He has obviously
full confidence in himself, but it is equally obvi-
ously a confidence born of thorough knowledge
and matured by persistent practice, not the empty
conceit of the facile worker who trusts to showy
cleverness to conceal the actual insufficiency of his
equipment. Mr. de Laszl6 succeeds in drawing
finely because he has learned first to see correctly
and has then trained his hand and eye to work in
harmony, and because he knows before he puts a
touch on his canvas just what that touch has to
contribute to the general scheme of his picture.
There is no need for him to fumble or to set down
vague marks which can be laboured later on into
something which professes to have a meaning,
neither is there any need for him to explain by
small additions what the mark of his brush really
signifies; his first touch does what he intends it
should do, and expresses what he wants it to
express, and from the first touch to the last each
one carries the picture surely on to its eventual
completion. Eut it is only the draughtsman who
knows thoroughly what he is about who can work
146

in this systematic and methodical manner, or who
can deal with a picture as if it were a sort of map
of exactly placed lines ; swift disaster would await
the man who tried to use this method before he
had learned how to see, or who attempted to apply
this system without having discovered the founda-
tion on which it rests.

However, it is not only because of his shrewdness
of observation and his admirable skill as a draughts-
man that Mr. de Laszlo is to be accounted an
artist of such notable capacity; he is, as well, an
exceedingly persuasive and sensitive colourist and
he has a vital decorative instinct. His portraits are
always important decorations—and in this they are
true to the best traditions of this branch of art
practice—dignified in design and planned with
sincere regard for the right adjustment of masses
and the rhythmical arrangement of lines. In each
of them there is a pattern which fills the canvas in
a peculiarly satisfying way and in the working out
of which the artist gives free rein to his inventive
ingenuity and his natural feeling for style. It is
not enough for him to record the character or to
realise the personality of his sitter, he must make
that personality the motive of a decoration which
emphasises and illustrates the sitter's character,
and that decoration becomes as much an essential
of the portrait as the sitter's face.

This is perhaps the direction in which Mr.
de Laszlo's art has developed most during recent
years. His executive powers, always remarkable,
have gained undoubtedly in flexibility and in
responsiveness to the demands he makes upon
them, but if later portraits—like those of Mrs.
Sandys, The Duchess of Portland, and The Right
Hon. A. /. Balfour—are compared with those he
painted in the earlier stages of his career, the gain in
breadth of artistic vision will be even more apparent.
But, after all, with an artist of his temperament,
progress of this kind was to be expected ; he is
endowed with too keen a sense of the importance of
portraiture to leave untried any of the possibilities
which it offers to him.

At the same time, in testing these possibilities he
never lapses into vague or aimless experiment; he
has too stable a mind and too serious a conviction
to play tricks with his principles. What he seeks,
really, is to widen the scope of his art without
changing its character, to make more emphatic the
message that throughout his life he has been trying
to deliver, and not to confuse his utterance by sound-
ing any discordant note. To express more fully and
more convincingly the artistic creed in which he
believes is his only aim. A. L. Baldrv.