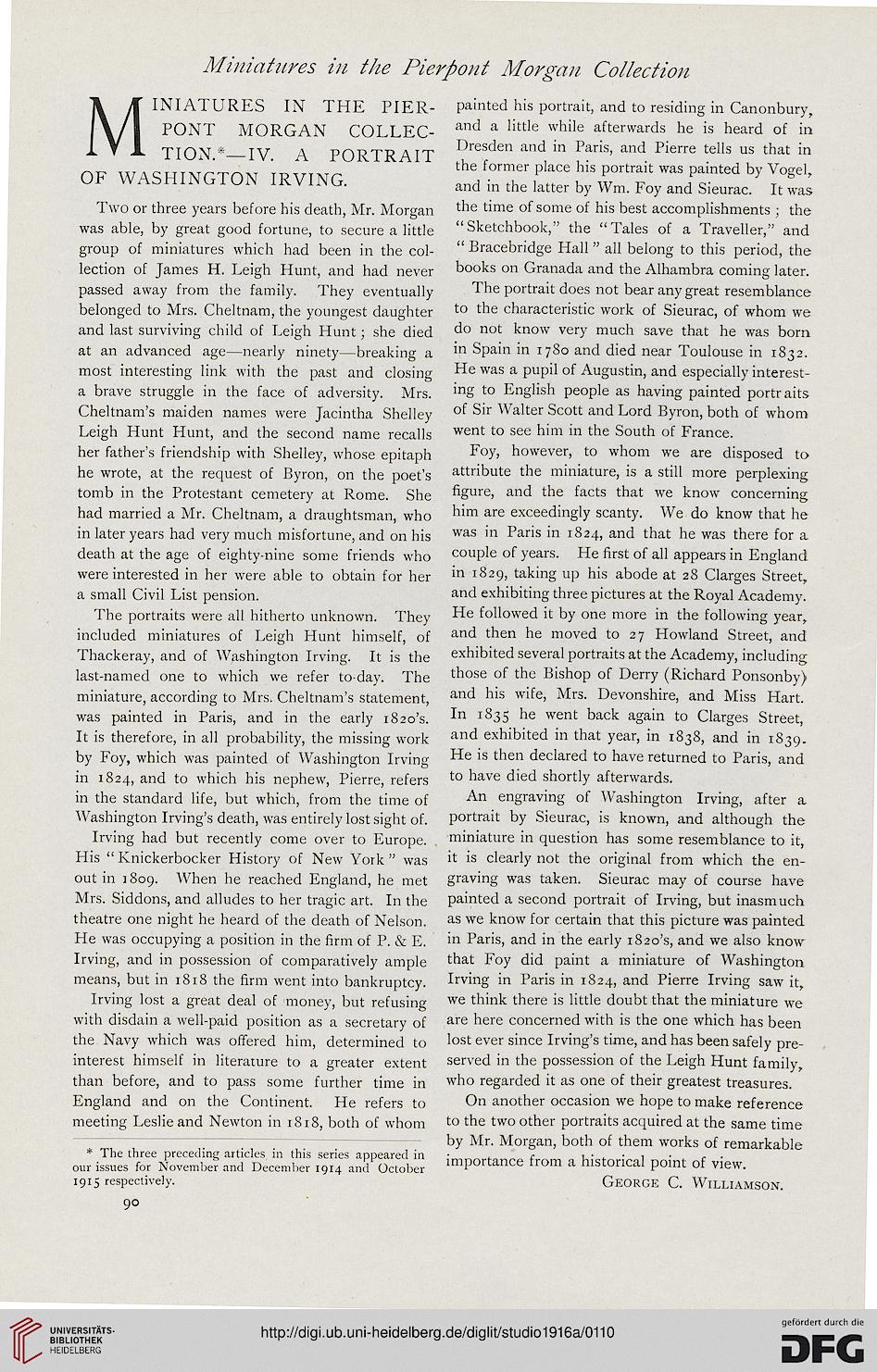 MINIATURES IN THE PIER-
PONT MORGAN COLLEC-
TION.*—IV. A PORTRAIT
OF WASHINGTON IRVING.

Two or three years before his death, Mr. Morgan
was able, by great good fortune, to secure a little
group of miniatures which had been in the col-
lection of James H. Leigh Hunt, and had never
passed away from the family. They eventually
belonged to Mrs. Cheltnam, the youngest daughter
and last surviving child of Leigh Hunt; she died
at an advanced age—nearly ninety—breaking a
most interesting link with the past and closing
a brave struggle in the face of adversity. Mrs.
Cheltnam's maiden names were Jacintha Shelley
Leigh Hunt Hunt, and the second name recalls
her father's friendship with Shelley, whose epitaph
he wrote, at the request of Byron, on the poet's
tomb in the Protestant cemetery at Rome. She
had married a Mr. Cheltnam, a draughtsman, who
in later years had very much misfortune, and on his
death at the age of eighty-nine some friends who
were interested in her were able to obtain for her
a small Civil List pension.

The portraits were all hitherto unknown. They
included miniatures of Leigh Hunt himself, of
Thackeray, and of Washington Irving. It is the
last-named one to which we refer to-day. The
miniature, according to Mrs. Cheltnam's statement,
was painted in Paris, and in the early 1820's.
It is therefore, in all probability, the missing work
by Foy, which was painted of Washington Irving
in 1824, and to which his nephew, Pierre, refers
in the standard life, but which, from the time of
Washington Irving's death, was entirely lost sight of.

Irving had but recently come over to Europe.
His " Knickerbocker History of New York " was
out in 1809. When he reached England, he met
Mrs. Siddons, and alludes to her tragic art. In the
theatre one night he heard of the death of Nelson.
He was occupying a position in the firm of P. & E.
Irving, and in possession of comparatively ample
means, but in 1818 the firm went into bankruptcy.

Irving lost a great deal of money, but refusing
with disdain a well-paid position as a secretary of
the Navy which was offered him, determined to
interest himself in literature to a greater extent
than before, and to pass some further time in
England and on the Continent. He refers to
meeting Leslie and Newton in 1818, both of whom

* The three preceding articles in this series appeared in
our issues for November and December 1914 and October
1915 respectively.

painted his portrait, and to residing in Canonbury,
and a little while afterwards he is heard of in
Dresden and in Paris, and Pierre tells us that in
the former place his portrait was painted by Vogel,
and in the latter by Wm. Foy and Sieurac. It was
the time of some of his best accomplishments ; the
"Sketchbook," the "Tales of a Traveller," and
" Bracebridge Hall " all belong to this period, the
books on Granada and the Alhambra coming later.

The portrait does not bear any great resemblance
to the characteristic work of Sieurac, of whom we
do not know very much save that he was bom
in Spain in 1780 and died near Toulouse in 1832.
He was a pupil of Augustin, and especially interest-
ing to English people as having painted portraits
of Sir Walter Scott and Lord Byron, both of whom
went to see him in the South of France.

Foy, however, to whom we are disposed to
attribute the miniature, is a still more perplexing
figure, and the facts that we know concerning
him are exceedingly scanty. We do know that he
was in Paris in 1824, and that he was there for a
couple of years. He first of all appears in England
in 1829, taking up his abode at 28 Clarges Street,
and exhibiting three pictures at the Royal Academy.
He followed it by one more in the following year,
and then he moved to 27 Howland Street, and
exhibited several portraits at the Academy, including
those of the Bishop of Derry (Richard Ponsonby)
and his wife, Mrs. Devonshire, and Miss Hart.
In 1835 ne went back again to Clarges Street,
and exhibited in that year, in 1838, and in 1839.
He is then declared to have returned to Paris, and
to have died shortly afterwards.

An engraving of Washington Irving, after a
portrait by Sieurac, is known, and although the
miniature in question has some resemblance to it,
it is clearly not the original from which the en-
graving was taken. Sieurac may of course have
painted a second portrait of Irving, but inasmuch
as we know for certain that this picture was painted
in Paris, and in the early 1820's, and we also know
that Foy did paint a miniature of Washington
Irving in Paris in 1824, and Pierre Irving saw it,
we think there is little doubt that the miniature we
are here concerned with is the one which has been
lost ever since Irving's time, and has been safely pre-
served in the possession of the Leigh Hunt family,
who regarded it as one of their greatest treasures.

On another occasion we hope to make reference
to the two other portraits acquired at the same time
by Mr. Morgan, both of them works of remarkable
importance from a historical point of view.