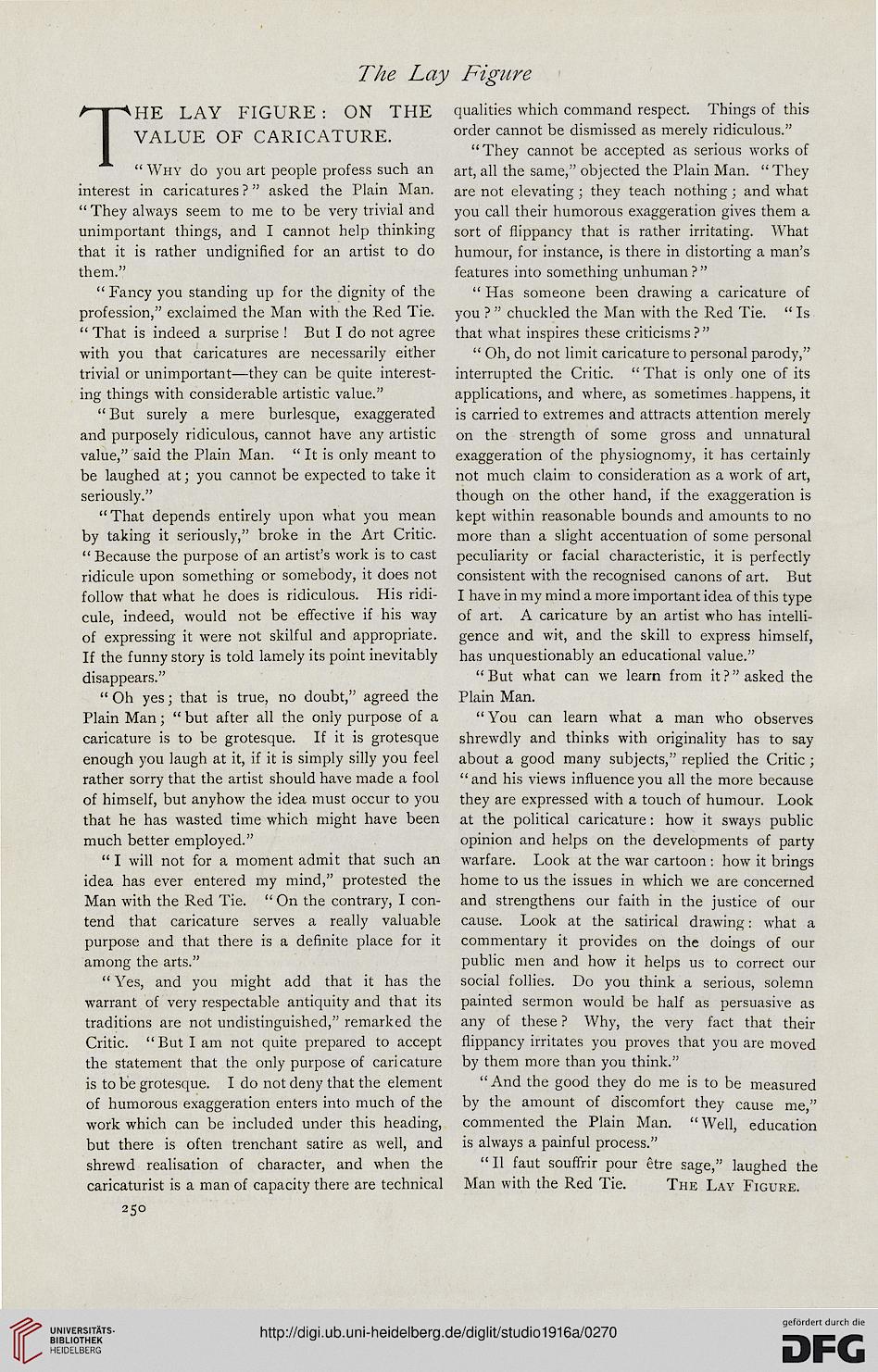 THE LAY FIGURE : ON THE
VALUE OF CARICATURE.

" Why do you art people profess such an
interest in caricatures ?" asked the Plain Man.
" They always seem to me to be very trivial and
unimportant things, and I cannot help thinking
that it is rather undignified for an artist to do
them."

" Fancy you standing up for the dignity of the
profession," exclaimed the Man with the Red Tie.
" That is indeed a surprise ! But I do not agree
with you that caricatures are necessarily either
trivial or unimportant—they can be quite interest-
ing things with considerable artistic value."

"But surely a mere burlesque, exaggerated
and purposely ridiculous, cannot have any artistic
value," said the Plain Man. " It is only meant to
be laughed at; you cannot be expected to take it
seriously."

" That depends entirely upon what you mean
by taking it seriously," broke in the Art Critic.
" Because the purpose of an artist's work is to cast
ridicule upon something or somebody, it does not
follow that what he does is ridiculous. His ridi-
cule, indeed, would not be effective if his way
of expressing it were not skilful and appropriate.
If the funny story is told lamely its point inevitably
disappears."

" Oh yes; that is true, no doubt," agreed the
Plain Man; " but after all the only purpose of a
caricature is to be grotesque. If it is grotesque
enough you laugh at it, if it is simply silly you feel
rather sorry that the artist should have made a fool
of himself, but anyhow the idea must occur to you
that he has wasted time which might have been
much better employed."

" I will not for a moment admit that such an
idea has ever entered my mind," protested the
Man with the Red Tie. " On the contrary, I con-
tend that caricature serves a really valuable
purpose and that there is a definite place for it
among the arts."

" Yes, and you might add that it has the
warrant of very respectable antiquity and that its
traditions are not undistinguished," remarked the
Critic. "But I am not quite prepared to accept
the statement that the only purpose of caricature
is to be grotesque. I do not deny that the element
of humorous exaggeration enters into much of the
work which can be included under this heading,
but there is often trenchant satire as well, and
shrewd realisation of character, and when the
caricaturist is a man of capacity there are technical
250

qualities which command respect. Things of this
order cannot be dismissed as merely ridiculous."

"They cannot be accepted as serious works of
art, all the same," objected the Plain Man. " They
are not elevating ; they teach nothing ; and what
you call their humorous exaggeration gives them a
sort of flippancy that is rather irritating. What
humour, for instance, is there in distorting a man's
features into something unhuman ? "

" Has someone been drawing a caricature of
you ? " chuckled the Man with the Red Tie. " Is
that what inspires these criticisms?"

" Oh, do not limit caricature to personal parody,"
interrupted the Critic. " That is only one of its
applications, and where, as sometimes happens, it
is carried to extremes and attracts attention merely
on the strength of some gross and unnatural
exaggeration of the physiognomy, it has certainly
not much claim to consideration as a work of art,
though on the other hand, if the exaggeration is
kept within reasonable bounds and amounts to no
more than a slight accentuation of some personal
peculiarity or facial characteristic, it is perfectly
consistent with the recognised canons of art. But
I have in my mind a more important idea of this type
of art. A caricature by an artist who has intelli-
gence and wit, and the skill to express himself,
has unquestionably an educational value."

"But what can we learn from it?"asked the
Plain Man.

"You can learn what a man who observes
shrewdly and thinks with originality has to say
about a good many subjects," replied the Critic ;
"and his views influence you all the more because
they are expressed with a touch of humour. Look
at the political caricature: how it sways public
opinion and helps on the developments of party
warfare. Look at the war cartoon : how it brings
home to us the issues in which we are concerned
and strengthens our faith in the justice of our
cause. Look at the satirical drawing: what a
commentary it provides on the doings of our
public men and how it helps us to correct our
social follies. Do you think a serious, solemn
painted sermon would be half as persuasive as
any of these ? Why, the very fact that their
flippancy irritates you proves that you are moved
by them more than you think."

"And the good they do me is to be measured
by the amount of discomfort they cause me,"
commented the Plain Man. "Well, education
is always a painful process."