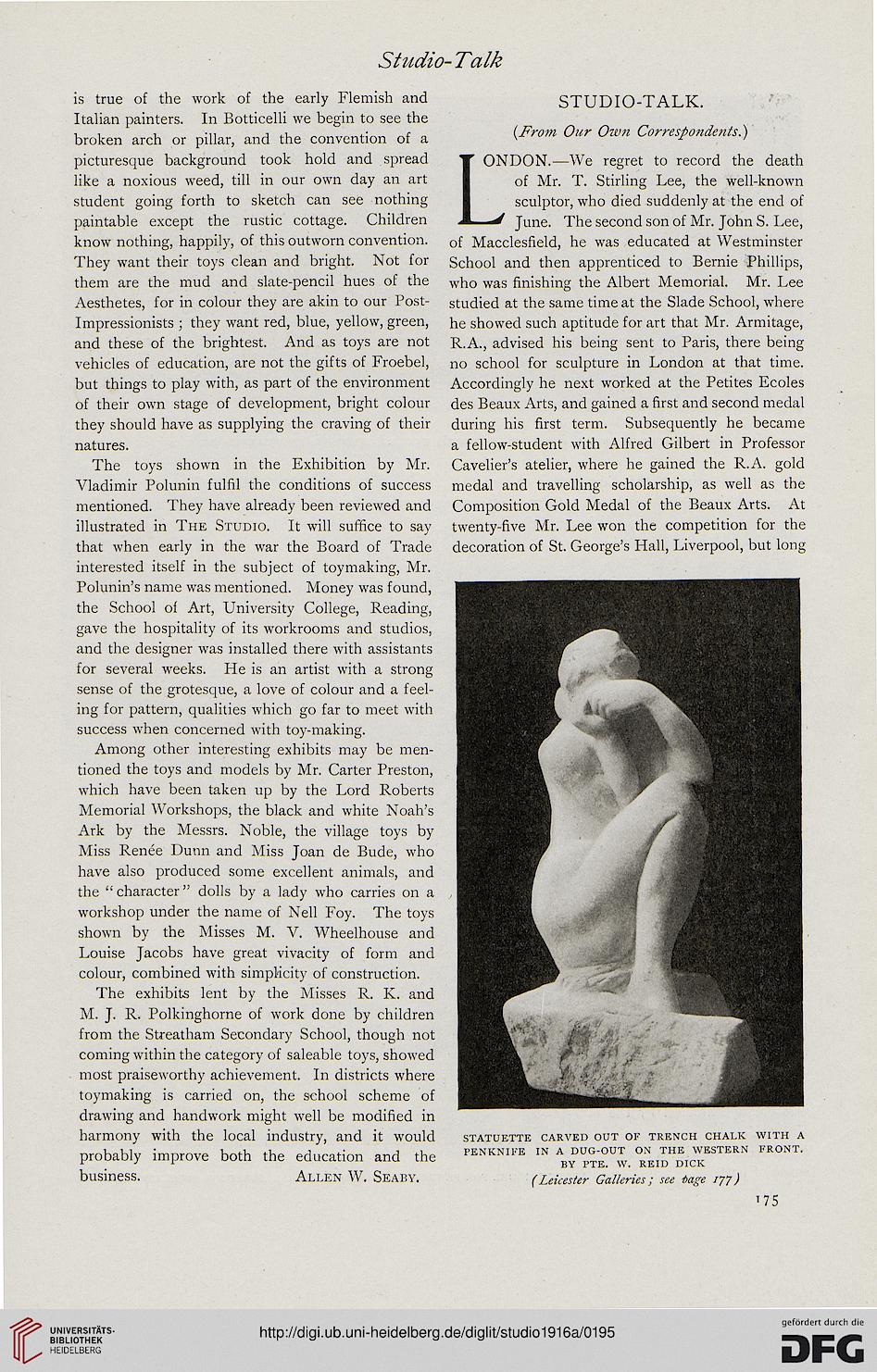 is true of the work of the early Flemish and
Italian painters. In Botticelli we begin to see the
broken arch or pillar, and the convention of a
picturesque background took hold and spread
like a noxious weed, till in our own day an art
student going forth to sketch can see nothing
paintable except the rustic cottage. Children
know nothing, happily, of this outworn convention.
They want their toys clean and bright. Not for
them are the mud and slate-pencil hues of the
Aesthetes, for in colour they are akin to our Post-
Impressionists ; they want red, blue, yellow, green,
and these of the brightest. And as toys are not
vehicles of education, are not the gifts of Froebel,
but things to play with, as part of the environment
of their own stage of development, bright colour
they should have as supplying the craving of their
natures.

The toys shown in the Exhibition by Mr.
Vladimir Polunin fulfil the conditions of success
mentioned. They have already been reviewed and
illustrated in The Studio. It will suffice to say
that when early in the war the Board of Trade
interested itself in the subject of toymaking, Mr.
Polunin's name was mentioned. Money was found,
the School of Art, University College, Reading,
gave the hospitality of its workrooms and studios,
and the designer was installed there with assistants
for several weeks. He is an artist with a strong
sense of the grotesque, a love of colour and a feel-
ing for pattern, qualities which go far to meet with
success when concerned with toy-making.

Among other interesting exhibits may be men-
tioned the toys and models by Mr. Carter Preston,
which have been taken up by the Lord Roberts
Memorial Workshops, the black and white Noah's
Ark by the Messrs. Noble, the village toys by
Miss Renee Dunn and Miss Joan de Bude, who
have also produced some excellent animals, and
the "character" dolls by a lady who carries on a
workshop under the name of Nell Foy. The toys
shown by the Misses M. V. Wheelhouse and
Louise Jacobs have great vivacity of form and
colour, combined with simplicity of construction.

The exhibits lent by the Misses R. K. and
M. J. R. Polkinghorne of work done by children
from the Streatham Secondary School, though not
coming within the category of saleable toys, showed
most praiseworthy achievement. In districts where
toymaking is carried on, the school scheme of
drawing and handwork might well be modified in
harmony with the local industry, and it would
probably improve both the education and the
business. Allen W. Seaby.

LONDON.—We regret to record the death
of Mr. T. Stirling Lee, the well-known
sculptor, who died suddenly at the end of
June. The second son of Mr. John S. Lee,
of Macclesfield, he was educated at Westminster
School and then apprenticed to Bernie Phillips,
who was finishing the Albert Memorial. Mr. Lee
studied at the same time at the Slade School, where
he showed such aptitude for art that Mr. Armitage,
R.A., advised his being sent to Paris, there being
no school for sculpture in London at that time.
Accordingly he next worked at the Petites Ecoles
des Beaux Arts, and gained a first and second medal
during his first term. Subsequently he became
a fellow-student with Alfred Gilbert in Professor
Cavelier's atelier, where he gained the R.A. gold
medal and travelling scholarship, as well as the
Composition Gold Medal of the Beaux Arts. At
twenty-five Mr. Lee won the competition for the
decoration of St. George's Hall, Liverpool, but long

STATUETTE CARVED OUT OF TRENCH CHALK WITH A
PENKNIFE IN A DUG-OUT ON THE WESTERN FRONT.
BY PTE. W. REID DICK