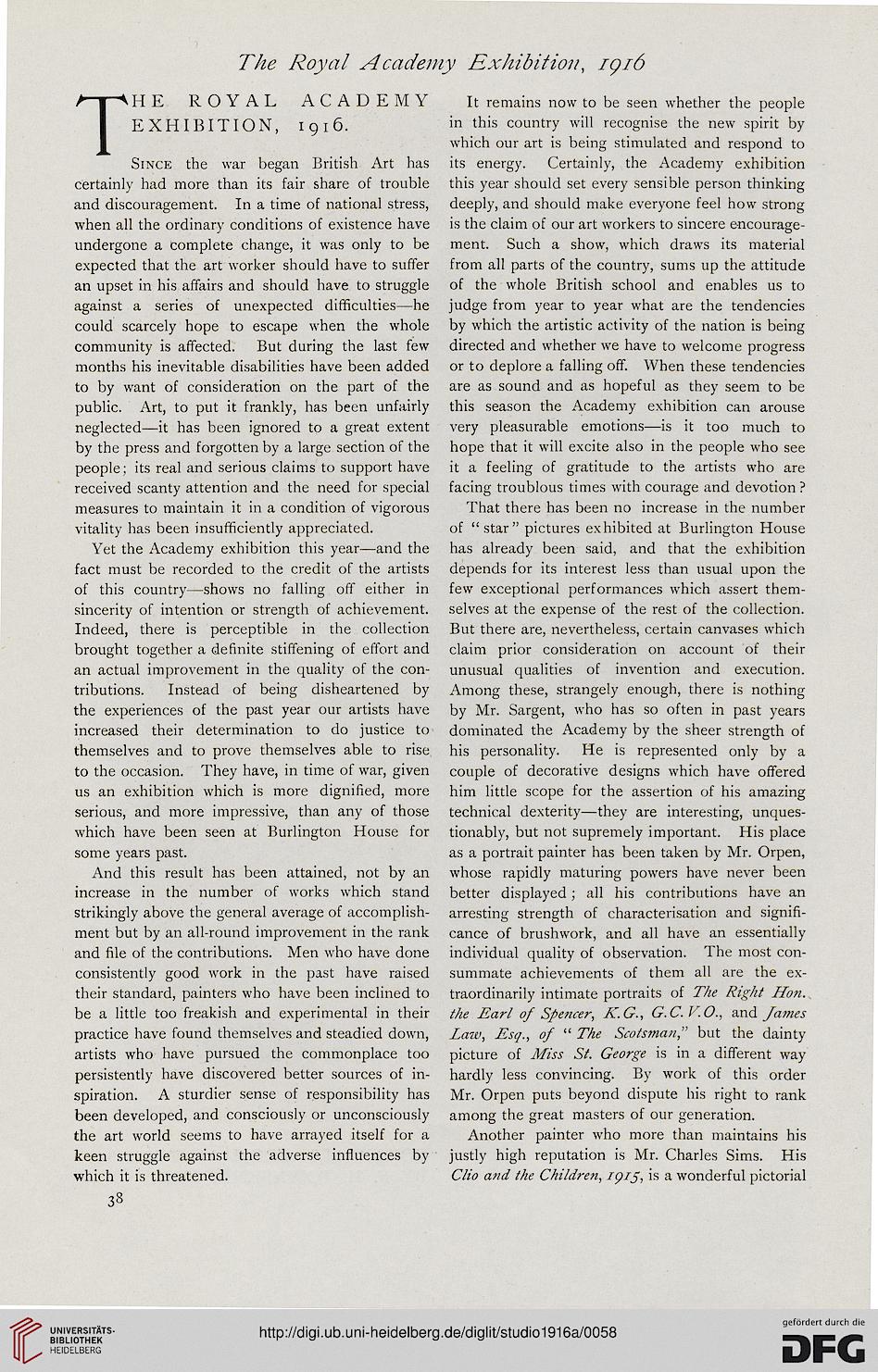 Since the war began British Art has
certainly had more than its fair share of trouble
and discouragement. In a time of national stress,
when all the ordinary conditions of existence have
undergone a complete change, it was only to be
expected that the art worker should have to suffer
an upset in his affairs and should have to struggle
against a series of unexpected difficulties—he
could scarcely hope to escape when the whole
community is affected. But during the last few
months his inevitable disabilities have been added
to by want of consideration on the part of the
public. Art, to put it frankly, has been unfairly
neglected—it has been ignored to a great extent
by the press and forgotten by a large section of the
people ; its real and serious claims to support have
received scanty attention and the need for special
measures to maintain it in a condition of vigorous
vitality has been insufficiently appreciated.

Yet the Academy exhibition this year—and the
fact must be recorded to the credit of the artists
of this country—shows no falling off either in
sincerity of intention or strength of achievement.
Indeed, there is perceptible in the collection
brought together a definite stiffening of effort and
an actual improvement in the quality of the con-
tributions. Instead of being disheartened by
the experiences of the past year our artists have
increased their determination to do justice to
themselves and to prove themselves able to rise
to the occasion. They have, in time of war, given
us an exhibition which is more dignified, more
serious, and more impressive, than any of those
which have been seen at Burlington House for
some years past.

And this result has been attained, not by an
increase in the number of works which stand
strikingly above the general average of accomplish-
ment but by an all-round improvement in the rank
and file of the contributions. Men who have done
consistently good work in the past have raised
their standard, painters who have been inclined to
be a little too freakish and experimental in their
practice have found themselves and steadied down,
artists who have pursued the commonplace too
persistently have discovered better sources of in-
spiration. A sturdier sense of responsibility has
been developed, and consciously or unconsciously
the art world seems to have arrayed itself for a
keen struggle against the adverse influences by
which it is threatened.
38

It remains now to be seen whether the people
in this country will recognise the new spirit by
which our art is being stimulated and respond to
its energy. Certainly, the Academy exhibition
this year should set every sensible person thinking
deeply, and should make everyone feel how strong
is the claim of our art workers to sincere encourage-
ment. Such a show, which draws its material
from all parts of the country, sums up the attitude
of the whole British school and enables us to
judge from year to year what are the tendencies
by which the artistic activity of the nation is being
directed and whether we have to welcome progress
or to deplore a falling off. When these tendencies
are as sound and as hopeful as they seem to be
this season the Academy exhibition can arouse
very pleasurable emotions—is it too much to
hope that it will excite also in the people who see
it a feeling of gratitude to the artists who are
facing troublous times with courage and devotion?

That there has been no increase in the number
of "star" pictures exhibited at Burlington House
has already been said, and that the exhibition
depends for its interest less than usual upon the
few exceptional performances which assert them-
selves at the expense of the rest of the collection.
But there are, nevertheless, certain canvases which
claim prior consideration on account of their
unusual qualities of invention and execution.
Among these, strangely enough, there is nothing
by Mr. Sargent, who has so often in past years
dominated the Academy by the sheer strength of
his personality. He is represented only by a
couple of decorative designs which have offered
him little scope for the assertion of his amazing
technical dexterity—they are interesting, unques-
tionably, but not supremely important. His place
as a portrait painter has been taken by Mr. Orpen,
whose rapidly maturing powers have never been
better displayed; all his contributions have an
arresting strength of characterisation and signifi-
cance of brushwork, and all have an essentially
individual quality of observation. The most con-
summate achievements of them all are the ex-
traordinarily intimate portraits of The Right Hon.
the Earl of Spencer, K.G., G.C.V.O., and James
Laiv, Esq., of " The Scotsman," but the dainty
picture of Miss St. George is in a different way
hardly less convincing. By work of this order
Mr. Orpen puts beyond dispute his right to rank
among the great masters of our generation.

Another painter who more than maintains his
justly high reputation is Mr. Charles Sims. His
Clio and the Children, ipij, is a wonderful pictorial