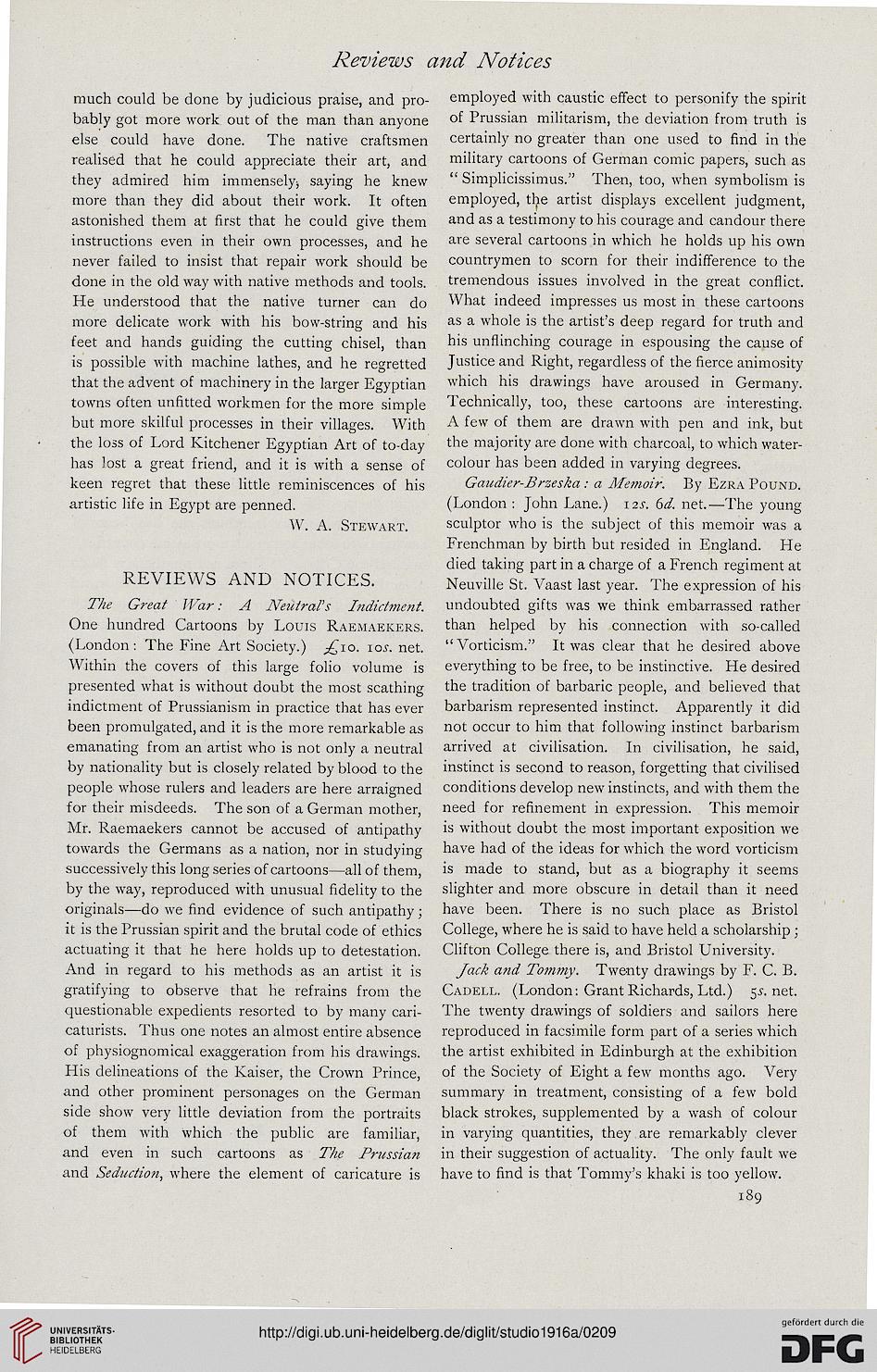 much could be done by judicious praise, and pro-
bably got more work out of the man than anyone
else could have done. The native craftsmen
realised that he could appreciate their art, and
they admired him immensely, saying he knew
more than they did about their work. It often
astonished them at first that he could give them
instructions even in their own processes, and he
never failed to insist that repair work should be
done in the old way with native methods and tools.
He understood that the native turner can do
more delicate work with his bow-string and his
feet and hands guiding the cutting chisel, than
is possible with machine lathes, and he regretted
that the advent of machinery in the larger Egyptian
towns often unfitted workmen for the more simple
but more skilful processes in their villages. With
the loss of Lord Kitchener Egyptian Art of to-day
has lost a great friend, and it is with a sense of
keen regret that these little reminiscences of his
artistic life in Egypt are penned.

The Great War: A Neutral's Indictment.
One hundred Cartoons by Louis Rae.maek.ers.
(London: The Fine Art Society.) ^10. \os. net.
Within the covers of this large folio volume is
presented what is without doubt the most scathing
indictment of Prussianism in practice that has ever
been promulgated, and it is the more remarkable as
emanating from an artist who is not only a neutral
by nationality but is closely related by blood to the
people whose rulers and leaders are here arraigned
for their misdeeds. The son of a German mother,
Mr. Raemaekers cannot be accused of antipathy
towards the Germans as a nation, nor in studying
successively this long series of cartoons—all of them,
by the way, reproduced with unusual fidelity to the
originals—do we find evidence of such antipathy;
it is the Prussian spirit and the brutal code of ethics
actuating it that he here holds up to detestation.
And in regard to his methods as an artist it is
gratifying to observe that he refrains from the
questionable expedients resorted to by many cari-
caturists. Thus one notes an almost entire absence
of physiognomical exaggeration from his drawings.
His delineations of the Kaiser, the Crown Prince,
and other prominent personages on the German
side show very little deviation from the portraits
of them with which the public are familiar,
and even in such cartoons as The Prussian
and Seduction, where the element of caricature is

employed with caustic effect to personify the spirit
of Prussian militarism, the deviation from truth is
certainly no greater than one used to find in the
military cartoons of German comic papers, such as
" Simplicissimus." Then, too, when symbolism is
employed, the artist displays excellent judgment,
and as a testimony to his courage and candour there
are several cartoons in which he holds up his own
countrymen to scorn for their indifference to the
tremendous issues involved in the great conflict.
What indeed impresses us most in these cartoons
as a whole is the artist's deep regard for truth and
his unflinching courage in espousing the cause of
Justice and Right, regardless of the fierce animosity
which his drawings have aroused in Germany.
Technically, too, these cartoons are interesting.
A few of them are drawn with pen and ink, but
the majority are done with charcoal, to which water-
colour has been added in varying degrees.

Gaudier-Brzeska : a Memoir. By Ezra Pound.
(London : John Lane.) 12s. 6d. net.—The young
sculptor who is the subject of this memoir was a
Frenchman by birth but resided in England. He
died taking part in a charge of a French regiment at
Neuville St. Vaast last year. The expression of his
undoubted gifts was we think embarrassed rather
than helped by his connection with so-called
"Vorticism." It was clear that he desired above
everything to be free, to be instinctive. He desired
the tradition of barbaric people, and believed that
barbarism represented instinct. Apparently it did
not occur to him that following instinct barbarism
arrived at civilisation. In civilisation, he said,
instinct is second to reason, forgetting that civilised
conditions develop new instincts, and with them the
need for refinement in expression. This memoir
is without doubt the most important exposition we
have had of the ideas for which the word vorticism
is made to stand, but as a biography it seems
slighter and more obscure in detail than it need
have been. There is no such place as Bristol
College, where he is said to have held a scholarship ;
Clifton College there is, and Bristol University.

Jack and Tommy. Twenty drawings by F. C. B.
Cadell. (London: Grant Richards, Ltd.) $s. net.
The twenty drawings of soldiers and sailors here
reproduced in facsimile form part of a series which
the artist exhibited in Edinburgh at the exhibition
of the Society of Eight a few months ago. Very
summary in treatment, consisting of a few bold
black strokes, supplemented by a wash of colour
in varying quantities, they are remarkably clever
in their suggestion of actuality. The only fault we
have to find is that Tommy's khaki is too yellow.