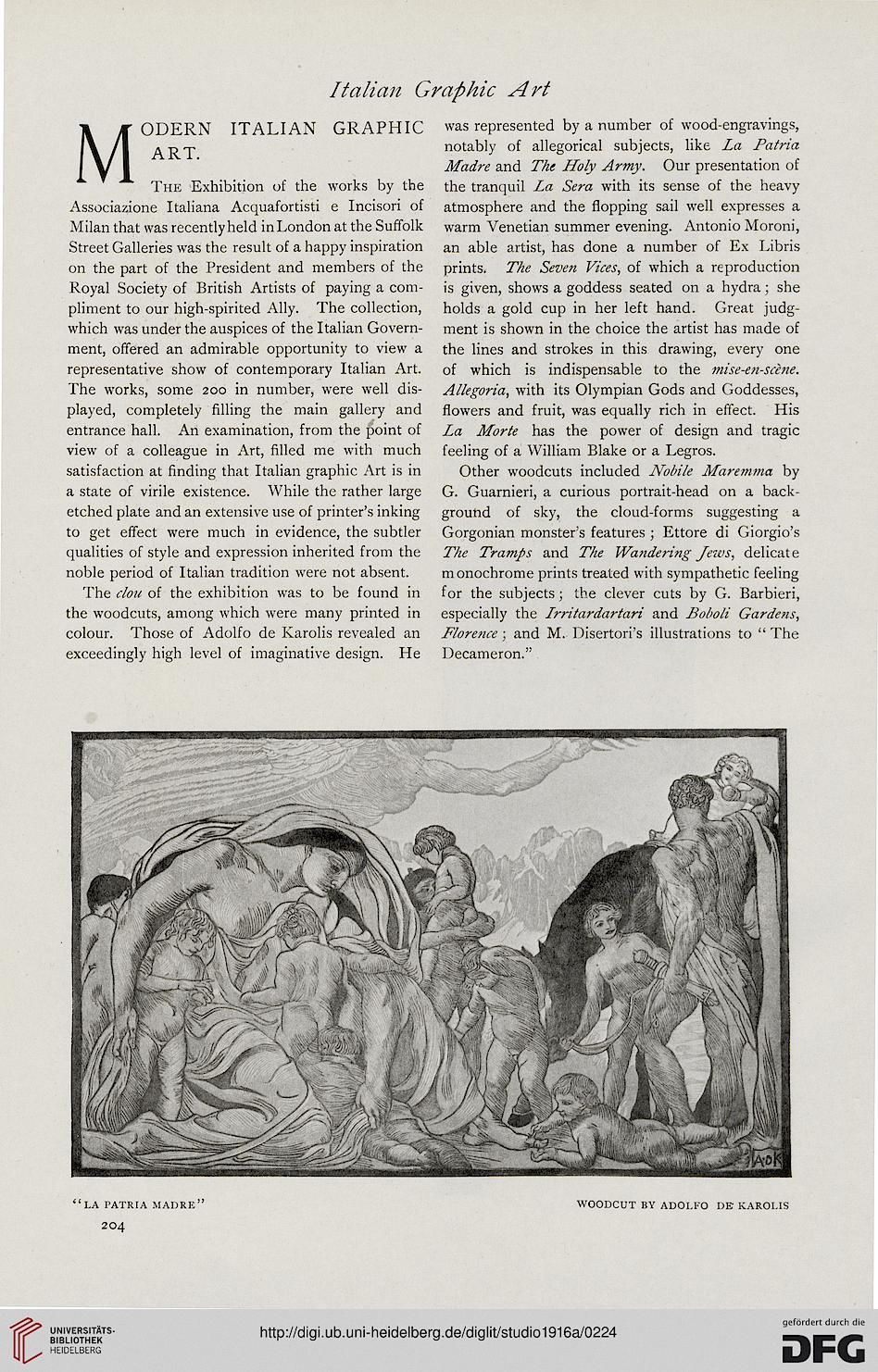 ODERN ITALIAN GRAPHIC was represented by a number of wood-engravings,

Madre and The Holy Army. Our presentation of
The Exhibition of the works by the the tranquil La Sera with its sense of the heavy
Associazione Italiana Acquafortisti e Incisori of atmosphere and the flopping sail well expresses a
Milan that was recently held inLondon at the Suffolk warm Venetian summer evening. Antonio Moroni,
Street Galleries was the result of a happy inspiration an able artist, has done a number of Ex Libris
on the part of the President and members of the prints. The Seven Vices, of which a reproduction
Royal Society of British Artists of paying a com- is given, shows a goddess seated on a hydra; she
pliment to our high-spirited Ally. The collection, holds a gold cup in her left hand. Great judg-
which was under the auspices of the Italian Govern- ment is shown in the choice the artist has made of
ment, offered an admirable opportunity to view a the lines and strokes in this drawing, every one
representative show of contemporary Italian Art. of which is indispensable to the mise-en-scene.
The works, some 200 in number, were well dis- Allegoria, with its Olympian Gods and Goddesses,
played, completely filling the main gallery and flowers and fruit, was equally rich in effect. His
entrance hall. An examination, from the point of La Morte has the power of design and tragic
view of a colleague in Art, filled me with much feeling of a William Blake or a Legros.
satisfaction at finding that Italian graphic Art is in Other woodcuts included Nobile Maremma by
a state of virile existence. While the rather large G. Guarnieri, a curious portrait-head on a back-
etched plate and an extensive use of printer's inking ground of sky, the cloud-forms suggesting a
to get effect were much in evidence, the subtler Gorgonian monster's features ; Ettore di Giorgio's
qualities of style and expression inherited from the The Tramps and The Wandering Jews, delicate
noble period of Italian tradition were not absent. monochrome prints treated with sympathetic feeling
The clou of the exhibition was to be found in for the subjects; the clever cuts by G. Barbieri,
the woodcuts, among which were many printed in especially the Lrritardartari and Boboli Gardens,
colour. Those of Adolfo de Karolis revealed an Florence ; and M. Disertori's illustrations to " The
exceedingly high level of imaginative design. He Decameron."