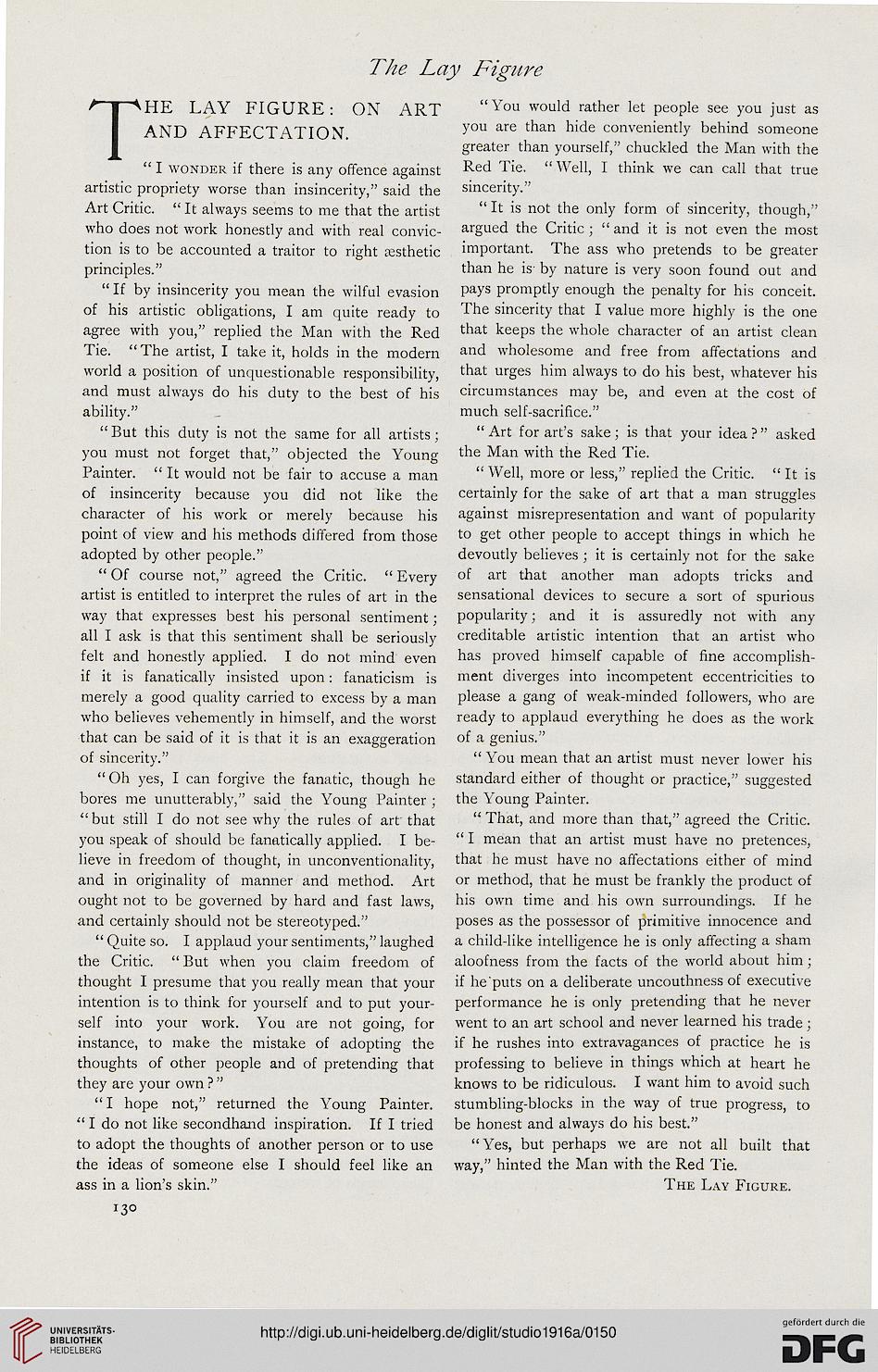 THE LAY FIGURE: ON ART
AND AFFECTATION.

" I wonder if there is any offence against
artistic propriety worse than insincerity," said the
Art Critic. " It always seems to me that the artist
who does not work honestly and with real convic-
tion is to be accounted a traitor to right resthetic
principles."

"If by insincerity you mean the wilful evasion
of his artistic obligations, I am quite ready to
agree with you," replied the Man with the Red
Tie. " The artist, I take it, holds in the modern
world a position of unquestionable responsibility,
and must always do his duty to the best of his
ability."

"But this duty is not the same for all artists;
you must not forget that," objected the Young
Painter. " It would not be fair to accuse a man
of insincerity because you did not like the
character of his work or merely because his
point of view and his methods differed from those
adopted by other people."

" Of course not," agreed the Critic. " Every
artist is entitled to interpret the rules of art in the
way that expresses best his personal sentiment;
all I ask is that this sentiment shall be seriously
felt and honestly applied. I do not mind even
if it is fanatically insisted upon: fanaticism is
merely a good quality carried to excess by a man
who believes vehemently in himself, and the worst
that can be said of it is that it is an exaggeration
of sincerity."

" Oh yes, I can forgive the fanatic, though he
bores me unutterably," said the Young Painter ;
" but still I do not see why the rules of art that
you speak of should be fanatically applied. I be-
lieve in freedom of thought, in unconventionality,
and in originality of manner and method. Art
ought not to be governed by hard and fast laws,
and certainly should not be stereotyped."

" Quite so. I applaud your sentiments," laughed
the Critic. " But when you claim freedom of
thought I presume that you really mean that your
intention is to think for yourself and to put your-
self into your work. You are not going, for
instance, to make the mistake of adopting the
thoughts of other people and of pretending that
they are your own ? "

" I hope not," returned the Young Painter.
" I do not like secondhand inspiration. If I tried
to adopt the thoughts of another person or to use
the ideas of someone else I should feel like an
ass in a lion's skin."

" You would rather let people see you just as
you are than hide conveniently behind someone
greater than yourself," chuckled the Man with the
Red Tie. " Well, I think we can call that true
sincerity."

" It is not the only form of sincerity, though,"
argued the Critic ; " and it is not even the most
important. The ass who pretends to be greater
than he is by nature is very soon found out and
pays promptly enough the penalty for his conceit.
The sincerity that I value more highly is the one
that keeps the whole character of an artist clean
and wholesome and free from affectations and
that urges him always to do his best, whatever his
circumstances may be, and even at the cost of
much self-sacrifice."

" Well, more or less," replied the Critic. " It is
certainly for the sake of art that a man struggles
against misrepresentation and want of popularity
to get other people to accept things in which he
devoutly believes ; it is certainly not for the sake
of art that another man adopts tricks and
sensational devices to secure a sort of spurious
popularity; and it is assuredly not with any
creditable artistic intention that an artist who
has proved himself capable of fine accomplish-
ment diverges into incompetent eccentricities to
please a gang of weak-minded followers, who are
ready to applaud everything he does as the work
of a genius."

" You mean that an artist must never lower his
standard either of thought or practice," suggested
the Young Painter.

" That, and more than that," agreed the Critic.
" I mean that an artist must have no pretences,
that he must have no affectations either of mind
or method, that he must be frankly the product of
his own time and his own surroundings. If he
poses as the possessor of primitive innocence and
a child-like intelligence he is only affecting a sham
aloofness from the facts of the world about him ;
if he puts on a deliberate uncouthness of executive
performance he is only pretending that he never
went to an art school and never learned his trade ;
if he rushes into extravagances of practice he is
professing to believe in things which at heart he
knows to be ridiculous. I want him to avoid such
stumbling-blocks in the way of true progress, to
be honest and always do his best."

"Yes, but perhaps we are not all built that
way," hinted the Man with the Red Tie.