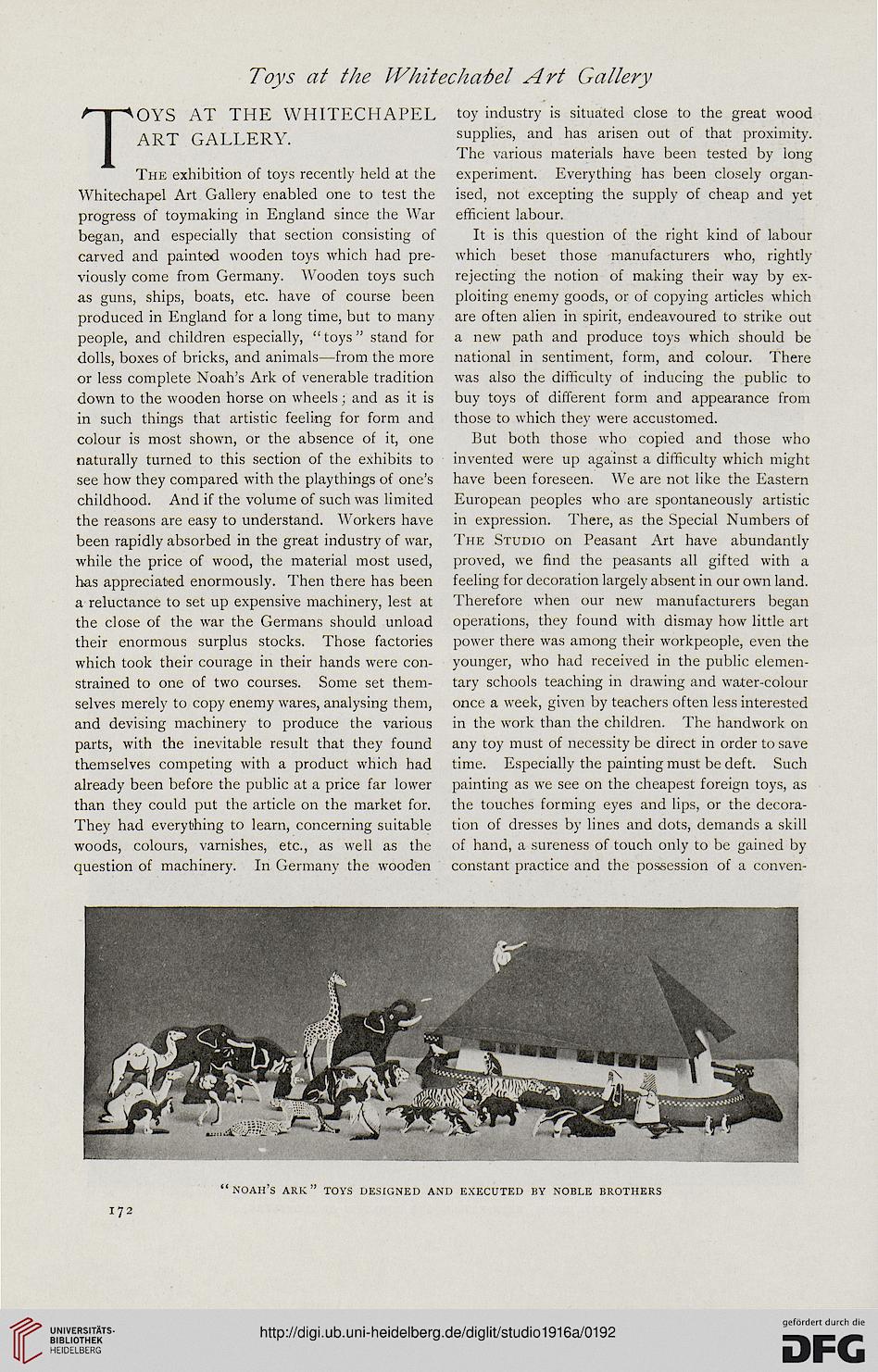 Information about OCR text
Toys at the IVhitecha-bel Art Gallery

ART GALI ERY supplies, and has arisen out of that proximity.
The various materials have been tested by long

The exhibition of toys recently held at the experiment. Everything has been closely organ-

Whitechapel Art Gallery enabled one to test the ised, not excepting the supply of cheap and yet

progress of toymaking in England since the War efficient labour.

began, and especially that section consisting of It is this question of the right kind of labour

carved and painted wooden toys which had pre- which beset those manufacturers who, rightly

viously come from Germany. Wooden toys such rejecting the notion of making their way by ex-

as guns, ships, boats, etc. have of course been ploiting enemy goods, or of copying articles which

produced in England for a long time, but to many are often alien in spirit, endeavoured to strike out

people, and children especially, " toys" stand for a new path and produce toys which should be

dolls, boxes of bricks, and animals—from the more national in sentiment, form, and colour. There

down to the wooden horse on wheels; and as it is buy toys of different form and appearance from

in such things that artistic feeling for form and those to which they were accustomed,

colour is most shown, or the absence of it, one But both those who copied and those who

see how they compared with the playthings of one's have been foreseen. We are not like the Eastern

childhood. And if the volume of such was limited European peoples who are spontaneously artistic

the reasons are easy to understand. Workers have in expression. There, as the Special Numbers of

been rapidly absorbed in the great industry of war, The Studio on Peasant Art have abundantly

while the price of wood, the material most used, proved, we find the peasants all gifted with a

has appreciated enormously. Then there has been feeling for decoration largely absent in our own land,

a reluctance to set up expensive machinery, lest at Therefore when our new manufacturers began

the close of the war the Germans should unload operations, they found with dismay how little art

their enormous surplus stocks. Those factories power there was among their workpeople, even the

which took their courage in their hands were con- younger, who had received in the public elemen-

strained to one of two courses. Some set them- tary schools teaching in drawing and water-colour

selves merely to copy enemy wares, analysing them, once a week, given by teachers often less interested

and devising machinery to produce the various in the work than the children. The handwork on

parts, with the inevitable result that they found any toy must of necessity be direct in order to save

themselves competing with a product which had time. Especially the painting must be deft. Such

already been before the public at a price far lower painting as we see on the cheapest foreign toys, as

than they could put the article on the market for. the touches forming eyes and lips, or the decora-

They had everything to learn, concerning suitable tion of dresses by lines and dots, demands a skill

woods, colours, varnishes, etc., as well as the of hand, a sureness of touch only to be gained by

question of machinery. In Germany the wooden constant practice and the possession of a conven-