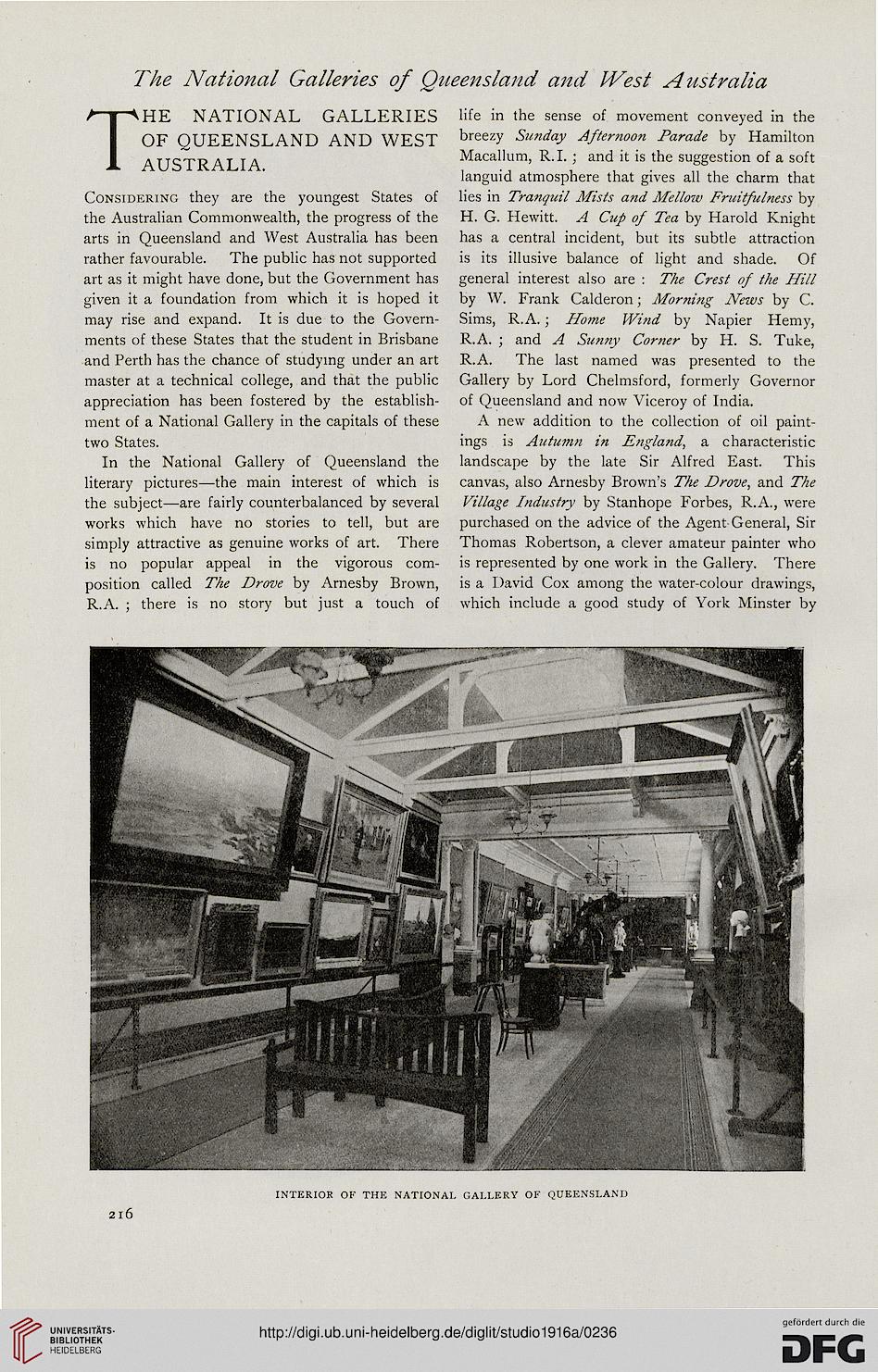 HE NATIONAL GALLERIES
OF QUEENSLAND AND WEST
AUSTRALIA.

Considering they are the youngest States of
the Australian Commonwealth, the progress of the
arts in Queensland and West Australia has been
rather favourable. The public has not supported
art as it might have done, but the Government has
given it a foundation from which it is hoped it
may rise and expand. It is due to the Govern-
ments of these States that the student in Brisbane
and Perth has the chance of studying under an art
master at a technical college, and that the public
appreciation has been fostered by the establish-
ment of a National Gallery in the capitals of these
two States.

In the National Gallery of Queensland the
literary pictures—the main interest of which is
the subject—are fairly counterbalanced by several
works which have no stories to tell, but are
simply attractive as genuine works of art. There
is no popular appeal in the vigorous com-
position called The Drove by Arnesby Brown,
R.A. ; there is no story but just a touch of

life in the sense of movement conveyed in the
breezy Sunday Afternoon Parade by Hamilton
Macallum, R.I. ; and it is the suggestion of a soft
languid atmosphere that gives all the charm that
lies in Tranquil Mists and Mellow Fruitfulness by
H. G. Hewitt. A Cup of Tea by Harold Knight
has a central incident, but its subtle attraction
is its illusive balance of light and shade. Of
general interest also are : The Crest of the Hill
by W. Frank Calderon; Morning News by C.
Sims, R.A.; Home Wind by Napier Hemy,
R.A. ; and A Sunny Corner by H. S. Tuke,
R.A. The last named was presented to the
Gallery by Lord Chelmsford, formerly Governor
of Queensland and now Viceroy of India.

A new addition to the collection of oil paint-
ings is Autumn in England, a characteristic
landscape by the late Sir Alfred East. This
canvas, also Arnesby Brown's The Drove, and The
Village Industry by Stanhope Forbes, R.A., were
purchased on the advice of the Agent General, Sir
Thomas Robertson, a clever amateur painter who
is represented by one work in the Gallery. There
is a David Cox among the water-colour drawings,
which include a good study of York Minster by

INTERIOR OF THE NATIONAL GALLERY OF QUEENSLAND