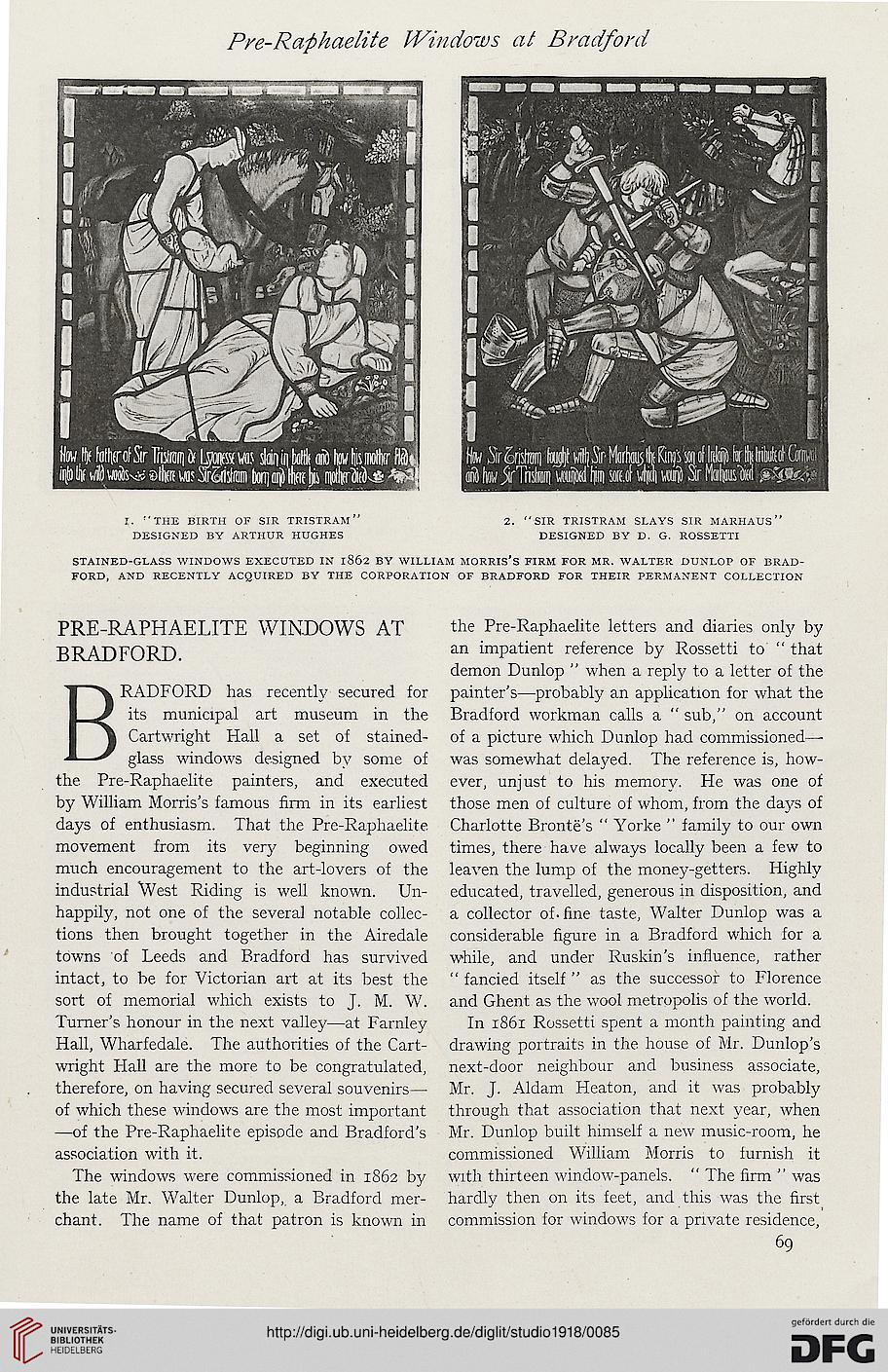 STAINED-GLASS WINDOWS EXECUTED IN 1862 BY WILLIAM MORRIS’S FIRM FOR MR. WALTER DUNLOP OF BRAD-
FORD, AND RECENTLY ACQUIRED BY THE CORPORATION OF BRADFORD FOR THEIR PERMANENT COLLECTION

BRADFORD has recently secured for
its municipal art museum in the
Cartwright Hall a set of stained-
glass windows designed bv some of
the Pre-Raphaelite painters, and executed
by William Morris’s famous firm in its earliest
days of enthusiasm. That the Pre-Raphaelite
movement from its very beginning owed
much encouragement to the art-lovers of the
industrial West Riding is well known. Un-
happily, not one of the several notable collec-
tions then brought together in the Airedale
towns of Leeds and Bradford has survived
intact, to be for Victorian art at its best the
sort of memorial which exists to J. M. W.
Turner’s honour in the next valley—at Farnley
Hall, Wharfedale. The authorities of the Cart-
wright Hall are the more to be congratulated,
therefore, on having secured several souvenirs—
of which these windows are the most important
—of the Pre-Raphaelite episode and Bradford’s
association with it.

The windows were commissioned in 1862 by
the late Mr. Walter Dunlop, a Bradford mer-
chant. The name of that patron is known in

the Pre-Raphaelite letters and diaries only by
an impatient reference by Rossetti to “ that
demon Dunlop ” when a reply to a letter of the
painter’s—probably an application for what the
Bradford workman calls a “ sub,” on account
of a picture which Dunlop had commissioned—
was somewhat delayed. The reference is, how-
ever, unjust to his memory. He was one of
those men of culture of whom, from the days of
Charlotte Bronte’s “ Yorke ” family to our own
times, there have always locally been a few to
leaven the lump of the money-getters. Highly
educated, travelled, generous in disposition, and
a collector of. fine taste, Walter Dunlop was a
considerable figure in a Bradford which for a
while, and under Ruskin’s influence, rather
“ fancied itself ” as the successor to Florence
and Ghent as the wool metropolis of the world.

In 1861 Rossetti spent a month painting and
drawing portraits in the house of Mr. Dunlop’s
next-door neighbour and business associate,
Mr. J. Aldam Heaton, and it was probably
through that association that next year, when
Mr. Dunlop built himself a new music-room, he
commissioned William Morris to furnish it
with thirteen window-panels. " The firm ” was
hardly then on its feet, and this was the first
commission for windows for a private residence,