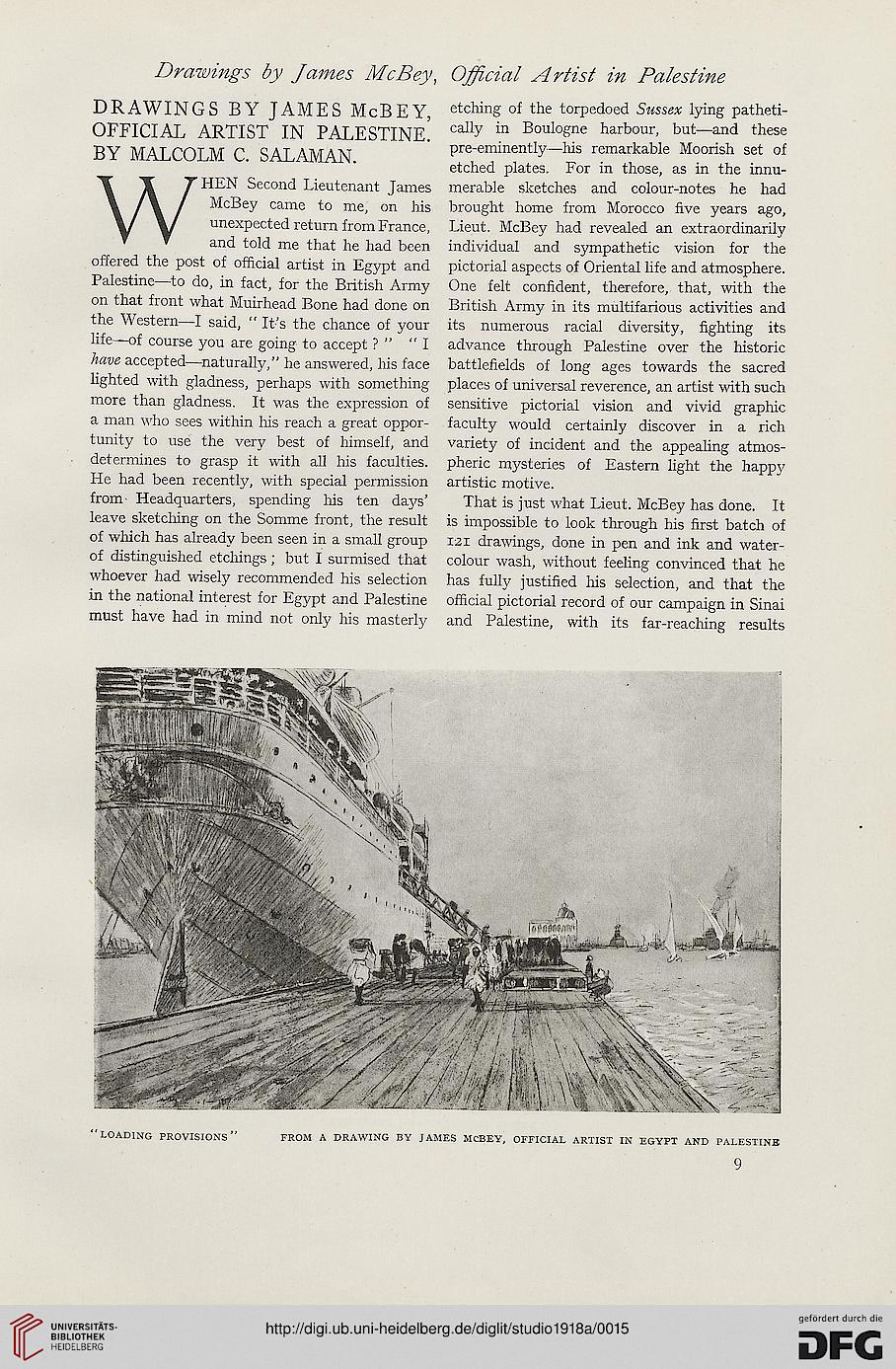 WHEN Second Lieutenant James
McBey came to me, on his
unexpected return from France,
and told me that he had been
offered the post of official artist in Egypt and
Palestine—to do, in fact, for the British Army
on that front what Muirhead Bone had done on
the Western—I said, " It's the chance of your
life—of course you are going to accept ? " "I
have accepted—naturally," he answered, his face
lighted with gladness, perhaps with something
more than gladness. It was the expression of
a man who sees within his reach a great oppor-
tunity to use the very best of himself, and
determines to grasp it with all his faculties.
He had been recently, with special permission
from Headquarters, spending his ten da3's'
leave sketching on the Somme front, the result
of which has already been seen in a small group
of distinguished etchings; but I surmised that
whoever had wisely recommended his selection
in the national interest for Egypt and Palestine
must have had in mind not only his masterly

etching of the torpedoed Sussex lying patheti-
cally in Boulogne harbour, but—and these
pre-eminently—his remarkable Moorish set of
etched plates. For in those, as in the innu-
merable sketches and colour-notes he had
brought home from Morocco five years ago,
Lieut. McBey had revealed an extraordinarily
individual and sympathetic vision for the
pictorial aspects of Oriental life and atmosphere.
One felt confident, therefore, that, with the
British Army in its multifarious activities and
its numerous racial diversity, fighting its
advance through Palestine over the historic
battlefields of long ages towards the sacred
places of universal reverence, an artist with such
sensitive pictorial vision and vivid graphic
faculty would certainly discover in a rich
variety of incident and the appealing atmos-
pheric mysteries of Eastern light the happy
artistic motive.

That is just what Lieut. McBey has done. It
is impossible to look through his first batch of
121 drawings, done in pen and ink and water-
colour wash, without feeling convinced that he
has fully justified his selection, and that the
official pictorial record of our campaign in Sinai
and Palestine, with its far-reaching results

FROM A DRAWING BY JAMES MCBEY, OFFICIAL ARTIST IN EGYPT AND PALESTINE