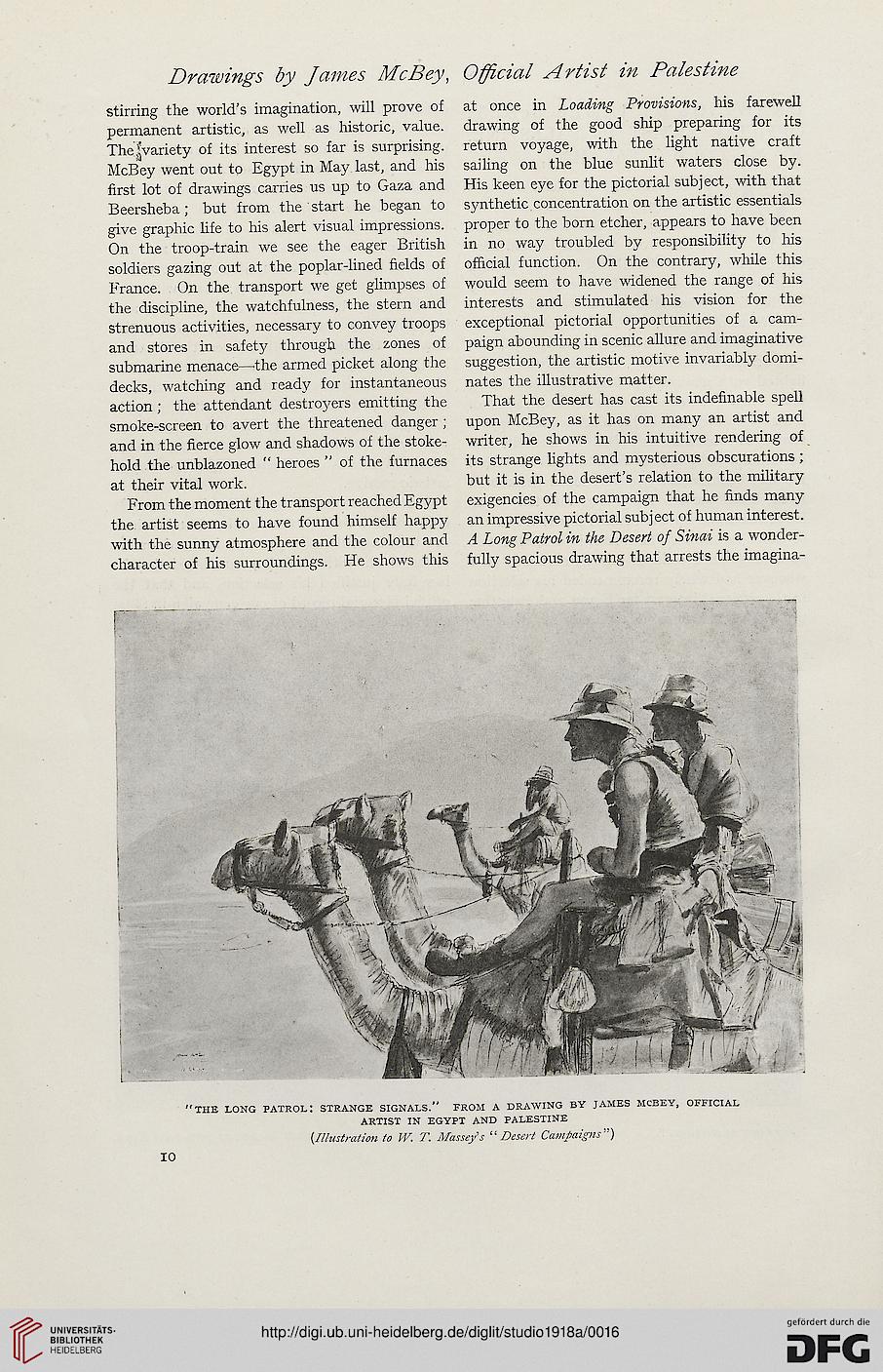 stirring the world's imagination, will prove of at once in Loading Provisions, his farewell
permanent artistic, as well as historic, value, drawing of the good ship preparing for its
The|variety of its interest so far is surprising, return voyage, with the light native craft
McBey went out to Egypt in May last, and his sailing on the blue sunlit waters close by.
first lot of drawings carries us up to Gaza and His keen eye for the pictorial subject, with that
Beersheba ; but from the start he began to synthetic concentration on the artistic essentials
give graphic life to his alert visual impressions, proper to the born etcher, appears to have been
On the troop-train we see the eager British in no way troubled by responsibility to his
soldiers gazing out at the poplar-lined fields of official function. On the contrary, while this
France. On the transport we get glimpses of would seem to have widened the range of his
the discipline, the watchfulness, the stern and interests and stimulated his vision for the
strenuous activities, necessary to convey troops exceptional pictorial opportunities of a cam-
and stores in safety through the zones of paign abounding in scenic allure and imaginative
submarine menace—the armed picket along the suggestion, the artistic motive invariably domi-
decks, watching and ready for instantaneous nates the illustrative matter,
action; the attendant destroyers emitting the That the desert has cast its indefinable spell
smoke-screen to avert the threatened danger; upon McBey, as it has on many an artist and
and in the fierce glow and shadows of the stoke- writer, he shows in his intuitive rendering of
hold the unblazoned " heroes " of the furnaces its strange lights and mysterious obscurations;
at their vital work. but it is in the desert's relation to the military
From the moment the transport reached Egypt exigencies of the campaign that he finds many
the artist seems to have found himself happy an impressive pictorial subject of human interest,
with the sunny atmosphere and the colour and A Long Patrol in the Desert of Sinai is a wonder-
character of his surroundings. He shows this fully spacious drawing that arrests the imagina-

"THE LONG PATROL: STRANGE SIGNALS." FROM A DRAWING BY JAMES MCBEY, OFFICIAL
ARTIST IN EGYPT AND PALESTINE