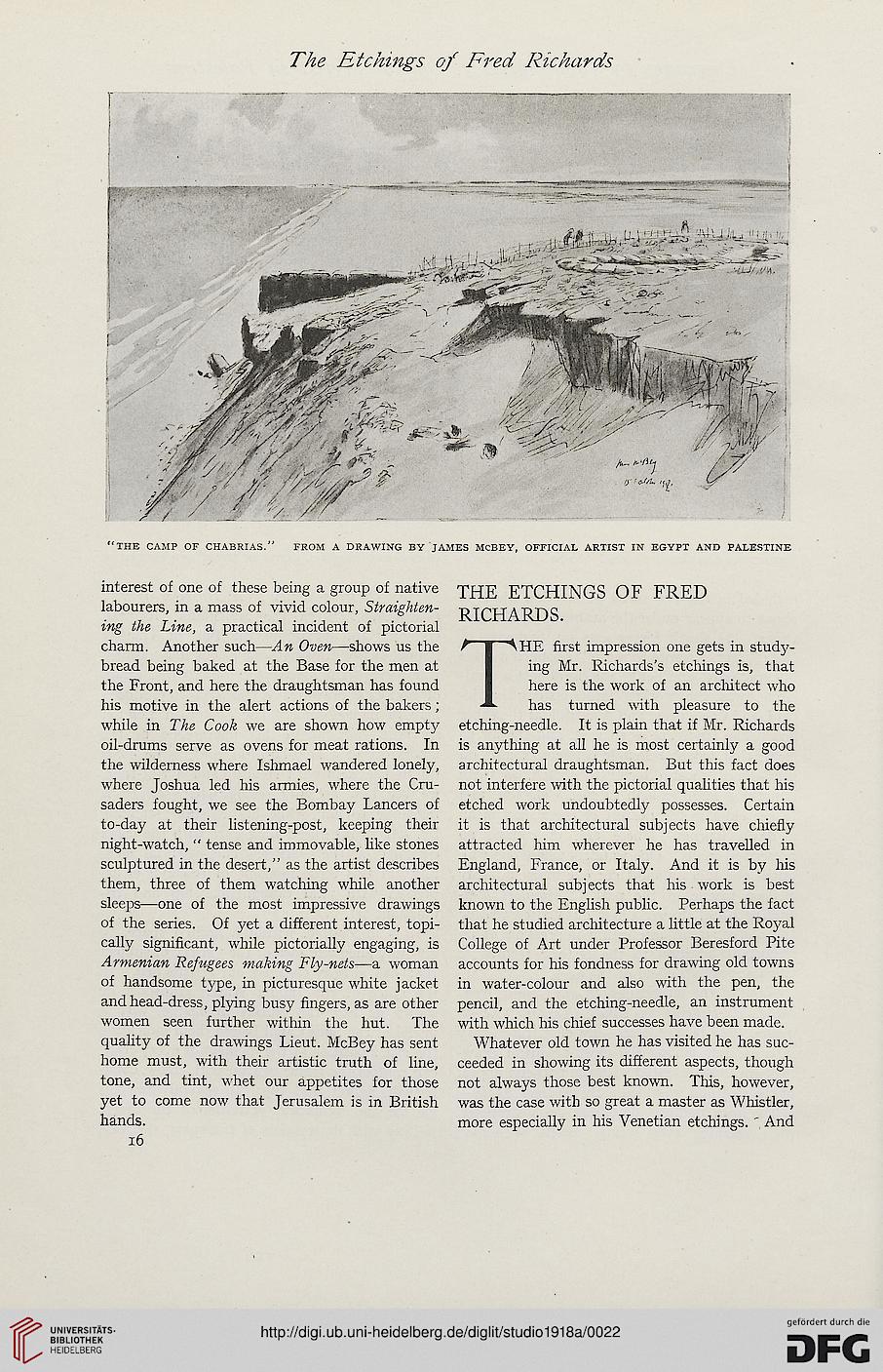 Information about OCR text
The Etchings of Fred Richards

"THE CAMP OF CHABRIAS." FROM A DRAWING BY JAMES MCBEY, OFFICIAL ARTIST IN EGYPT AND PALESTINE

interest of one of these being a group of native
labourers, in a mass of vivid colour, Straighten-
ing the Line, a practical incident of pictorial
charm. Another such—An Oven—shows us the
bread being baked at the Base for the men at
the Front, and here the draughtsman has found
his motive in the alert actions of the bakers;
while in The Cook we are shown how empty
oil-drums serve as ovens for meat rations. In
the wilderness where Ishmael wandered lonely,
where Joshua led his armies, where the Cru-
saders fought, we see the Bombay Lancers of
to-day at their listening-post, keeping their
night-watch, " tense and immovable, like stones
sculptured in the desert," as the artist describes
them, three of them watching while another
sleeps—one of the most impressive drawings
of the series. Of yet a different interest, topi-
cally significant, while pictorially engaging, is
Armenian Refugees making Fly-nets—a woman
of handsome type, in picturesque white jacket
and head-dress, plying busy fingers, as are other
women seen further within the hut. The
quality of the drawings Lieut. McBey has sent
home must, with their artistic truth of line,
tone, and tint, whet our appetites for those
yet to come now that Jerusalem is in British
hands.
16

THE ETCHINGS OF FRED
RICHARDS.

THE first impression one gets in study-
ing Mr. Richards's etchings is, that
here is the work of an architect who
has turned with pleasure to the
etching-needle. It is plain that if Mr. Richards
is anything at all he is most certainly a good
architectural draughtsman. But this fact does
not interfere with the pictorial qualities that his
etched work undoubtedly possesses. Certain
it is that architectural subjects have chiefly
attracted him wherever he has travelled in
England, France, or Italy. And it is by his
architectural subjects that his work is best
known to the English public. Perhaps the fact
that he studied architecture a little at the Royal
College of Art under Professor Beresford Pite
accounts for his fondness for drawing old towns
in water-colour and also with the pen, the
pencil, and the etching-needle, an instrument
with which his chief successes have been made.

Whatever old town he has visited he has suc-
ceeded in showing its different aspects, though
not always those best known. This, however,
was the case with so great a master as Whistler,
more especially in his Venetian etchings. ' And