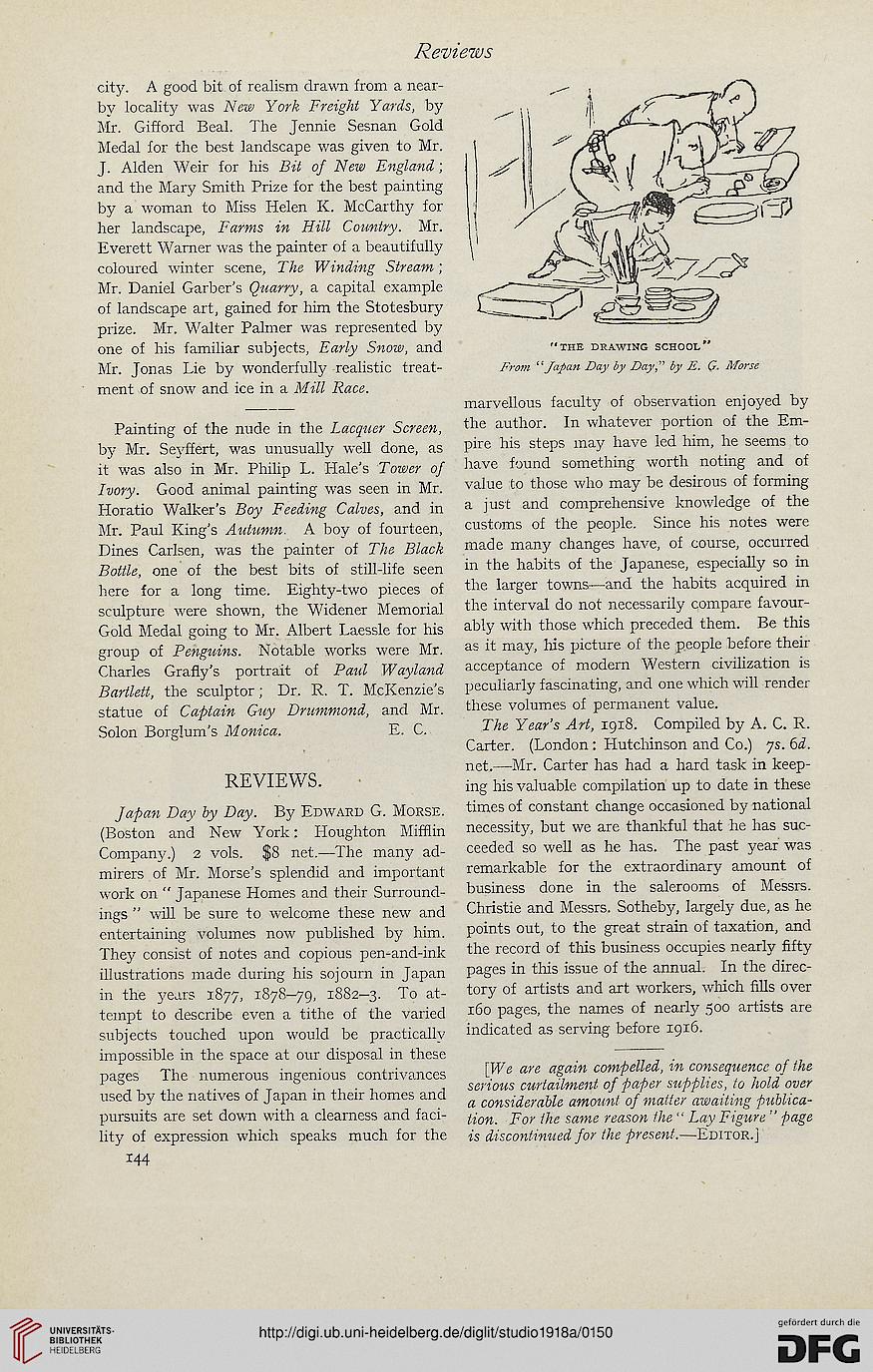 city. A good bit of realism drawn from a near-
by locality was New York Freight Yards, by
Mr. Gifford Beal. The Jennie Sesnan Gold
Medal for the best landscape was given to Mr.
J. Alden Weir for his Bit of New England;
and the Mary Smith Prize for the best painting
by a woman to Miss Helen K. McCarthy for
her landscape, Farms in Hill Country. Mr.
Everett Warner was the painter of a beautifully
coloured winter scene, The Winding Stream.;
Mr. Daniel Garber's Quarry, a capital example
of landscape art, gained for him the Stotesbury
prize. Mr. Walter Palmer was represented by
one of his familiar subjects, Early Snow, and
Mr. Jonas Lie by wonderfully realistic treat-
ment of snow and ice in a Mill Race.

Painting of the nude in the Lacquer Screen,
hy Mr. Seyffert, was unusually well done, as
it was also in Mr. Philip L. Hale's Tower of
Ivory. Good animal painting was seen in Mr.
Horatio Walker's Boy Feeding Calves, and in
Mr. Paul King's Autumn. A boy of fourteen,
Dines Carlsen, was the painter of The Black
Bottle, one of the best bits of still-life seen
here for a long time. Eighty-two pieces of
sculpture were shown, the Widener Memorial
Gold Medal going to Mr. Albert Laessle for his
group of Penguins. Notable works were Mr.
Charles Grafly's portrait of Paul Wayland
Bartlett, the sculptor; Dr. R. T. McKenzie's
statue of Captain Guy Drummond, and Mr.
Solon Borglum's Monica. E. C.

Japan Day by Day. By Edward G. Morse.
(Boston and New York: Houghton Mifflin
Company.) 2 vols. $8 net.—The many ad-
mirers of Mr. Morse's splendid and important
work on " Japanese Homes and their Surround-
ings " will be sure to welcome these new and
entertaining volumes now published by him.
They consist of notes and copious pen-and-ink
illustrations made during his sojourn in Japan
in the years 1877, 1878-79, 1882—3. To at-
tempt to describe even a tithe of the varied
subjects touched upon would be practically
impossible in the space at our disposal in these
pages The numerous ingenious contrivances
used by the natives of Japan in their homes and
pursuits are set down with a clearness and faci-
lity of expression which speaks much for the
144

marvellous faculty of observation enjoyed by
the author. In whatever portion of the Em-
pire his steps may have led him, he seems to
have found something worth noting and of
value to those who may be desirous of forming
a just and comprehensive knowledge of the
customs of the people. Since his notes were
made many changes have, of course, occurred
in the habits of the Japanese, especially so in
the larger towns—and the habits acquired in
the interval do not necessarily compare favour-
ably with those which preceded them. Be this
as it may, his picture of the people before their
acceptance of modern Western civilization is
peculiarly fascinating, and one which will render
these volumes of permanent value.

The Year's Art, 1918. Compiled by A. C. R.
Carter. (London: Hutchinson and Co.) 7s. 6d.
net.—Mr. Carter has had a hard task in keep-
ing his valuable compilation up to date in these
times of constant change occasioned by national
necessity, but we are thankful that he has suc-
ceeded so well as he has. The past year was
remarkable for the extraordinary amount of
business done in the salerooms of Messrs.
Christie and Messrs. Sotheby, largely due, as he
points out, to the great strain of taxation, and
the record of this business occupies nearly fifty
pages in this issue of the annual. In the direc-
tory of artists and art workers, which fills over
160 pages, the names of nearly 500 artists are
indicated as serving before 1916.

[We are again compelled, in consequence of the
serious curtailment of paper supplies, to hold over
a considerable amount of matter awaiting publica-
tion. For the same reason the " Lay Figure " page
is discontinued for the present.—Editor.]