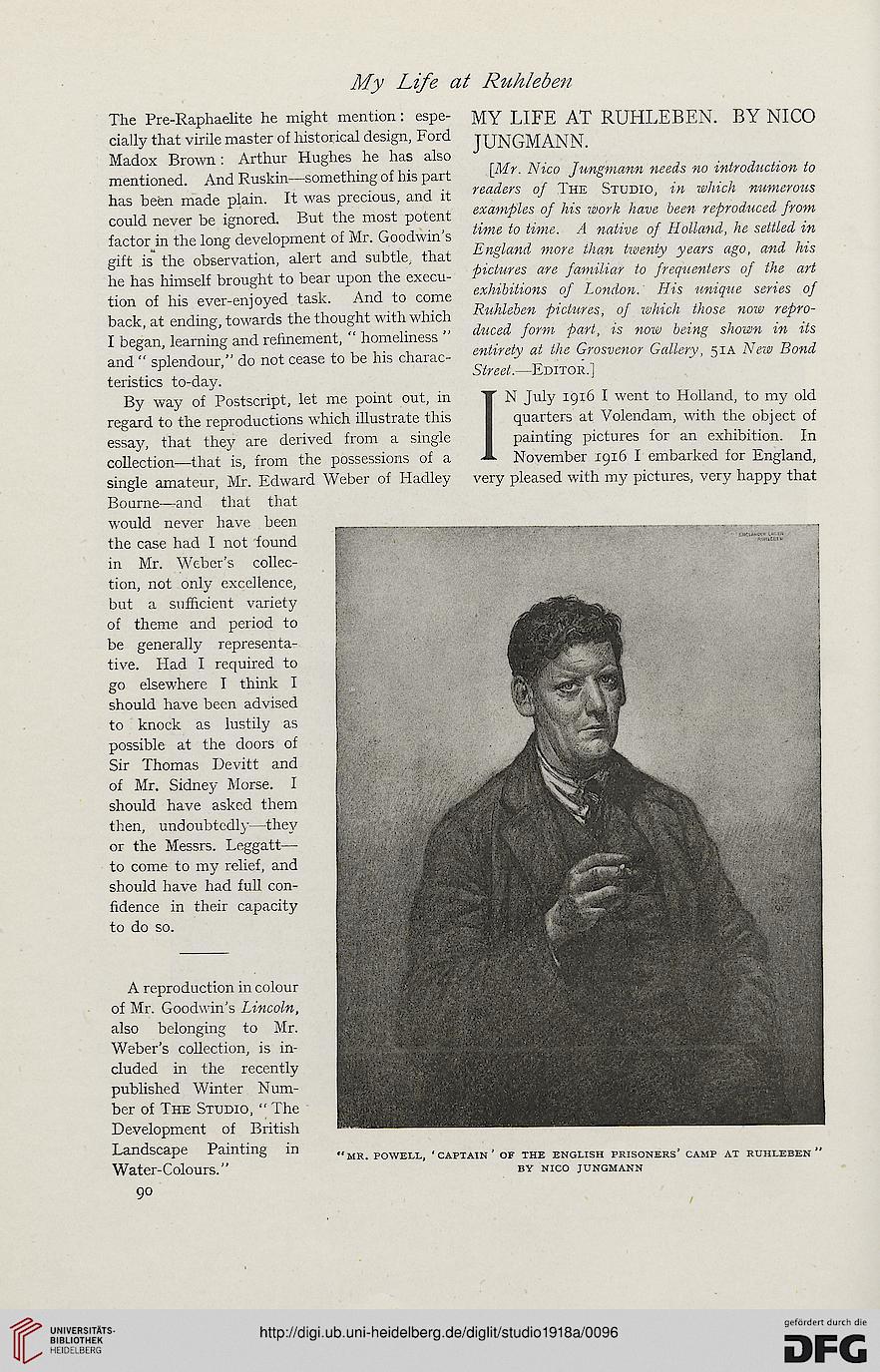 Information about OCR text
My Life at Ruhleben

The Pre-Raphaelite he might mention: espe- MY LIFE AT RUHLEBEN. BY NICO

mentioned. And Ruskin—something of his part iMr- Nico J^gmann needs no introduction to

has been made plain. It was precious, and it readers °f The Studio< in wlnch numerous

could never be ignored. But the most potent examPl™ of his work have been reproduced from

factor in the long development of Mr. Goodwin's Ume to hme- A natiw °f Holland, he settled in

gift is" the observation, alert and subtle that England more than twenty years ago, and his

tion of his ever-enjoyed task. And to come exhibitions of London: His unique series of

back at ending towards the thought with which Ruhleben pictures, of which those now repro-

and " splendour," do not cease to be his charac- enhrety at the Grosvenor Gallery, 5ia New Bond

By way of Postscript, let me point out, in TN July 1916 I went to Holland, to my old
regard to the reproductions which illustrate this quarters at Volendam, with the object of

essay, that they are derived from a single painting pictures for an exhibition. In

collection—that is, from the possessions of a A November 1916 I embarked for England,
single amateur, Mr. Edward Weber of Hadley very pleased with my pictures, very happy that
Bourne—and that that
would never have been
the case had I not found
in Mr. Weber's collec-
tion, not only excellence,
but a sufficient variety
of theme and period to
be generally representa-
tive. Had I required to
go elsewhere I think I
should have been advised
to knock as lustily as
possible at the doors of
Sir Thomas Devitt and
of Mr. Sidney Morse. I
should have asked them
then, undoubtedly—the}'
or the Messrs. Leggatt—
to come to my relief, and
should have had full con-
fidence in their capacity
to do so.

A reproduction in colour
of Mr. Goodwin's Lincoln,
also belonging to Mr.
Weber's collection, is in-
cluded in the recently
published Winter Num-
ber of The Studio, " The
Development of British
Landscape Painting in „