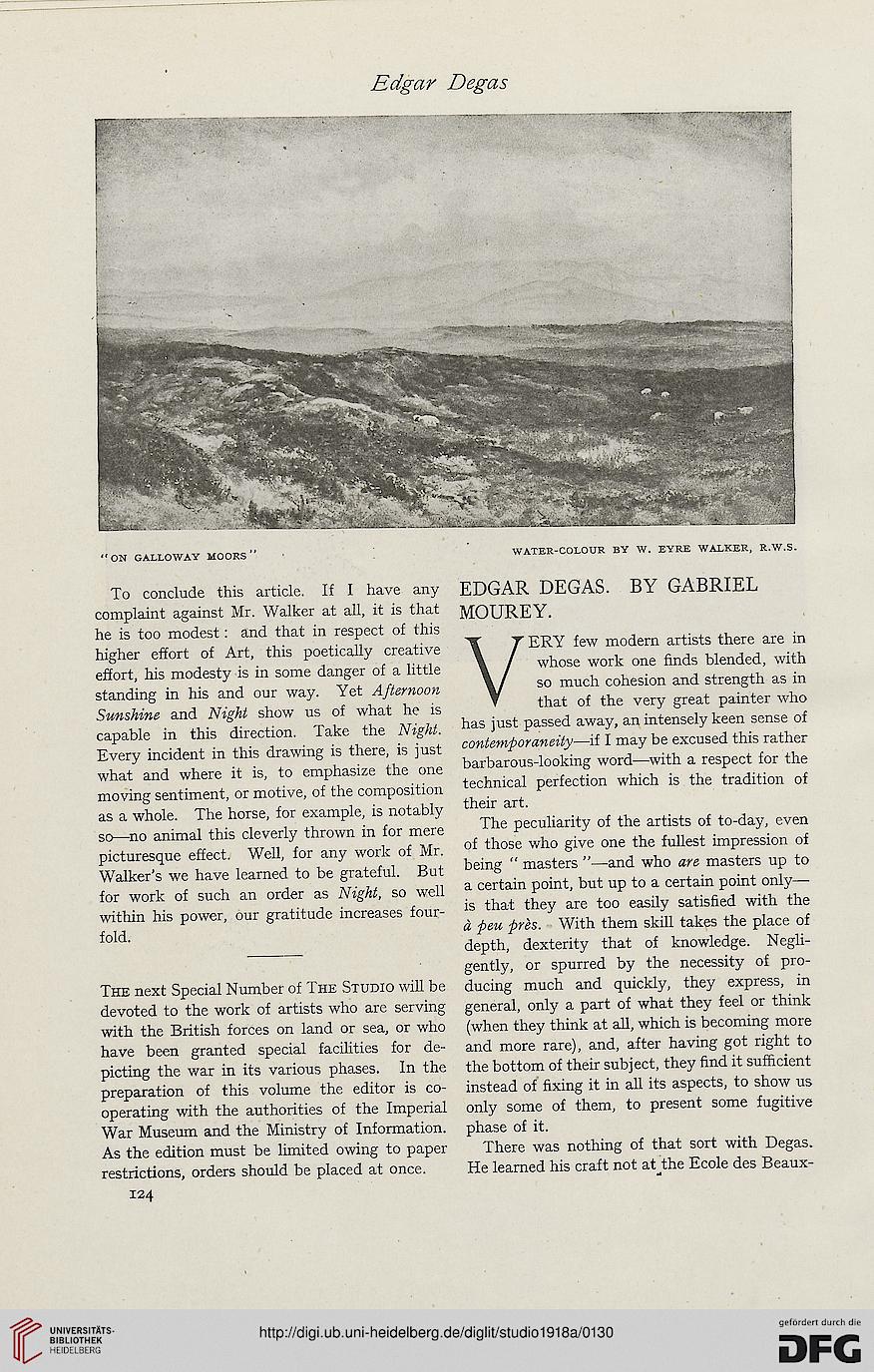 To conclude this article. If I have any
complaint against Mr. Walker at all, it is that
he is too modest: and that in respect of this
higher effort of Art, this poetically creative
effort, his modesty is in some danger of a little
standing in his and our way. Yet Afternoon
Sunshine and Night show us of what he is
capable in this direction. Take the Night.
Every incident in this drawing is there, is just
what and where it is, to emphasize the one
moving sentiment, or motive, of the composition
as a whole. The horse, for example, is notably
so—no animal this cleverly thrown in for mere
picturesque effect. Well, for any work of Mr.
Walker's we have learned to be grateful. But
for work of such an order as Night, so well
within his power, our gratitude increases four-
fold.

The next Special Number of The Studio will be
devoted to the work of artists who are serving
with the British forces on land or sea, or who
have been granted special facilities for de-
picting the war in its various phases. In the
preparation of this volume the editor is co-
operating with the authorities of the Imperial
War Museum and the Ministry of Information.
As the edition must be limited owing to paper
restrictions, orders should be placed at once.
124

VERY few modern artists there are in
whose work one finds blended, with
so much cohesion and strength as in
that of the very great painter who
has just passed away, an intensely keen sense of
contemporaneity—if I may be excused this rather
barbarous-looking word—with a respect for the
technical perfection which is the tradition of
their art.

The peculiarity of the artists of to-day, even
of those who give one the fullest impression of
being " masters "—and who are masters up to
a certain point, but up to a certain point only—
is that they are too easily satisfied with the
a peu pres. With them skill takes the place of
depth, dexterity that of knowledge. Negli-
gently, or spurred by the necessity of pro-
ducing much and quickly, they express, in
general, only a part of what they feel or think
(when they think at all, which is becoming more
and more rare), and, after having got right to
the bottom of their subject, they find it sufficient
instead of fixing it in all its aspects, to show us
only some of them, to present some fugitive
phase of it.

There was nothing of that sort with Degas.
He learned his craft not at the Ecole des Beaux-