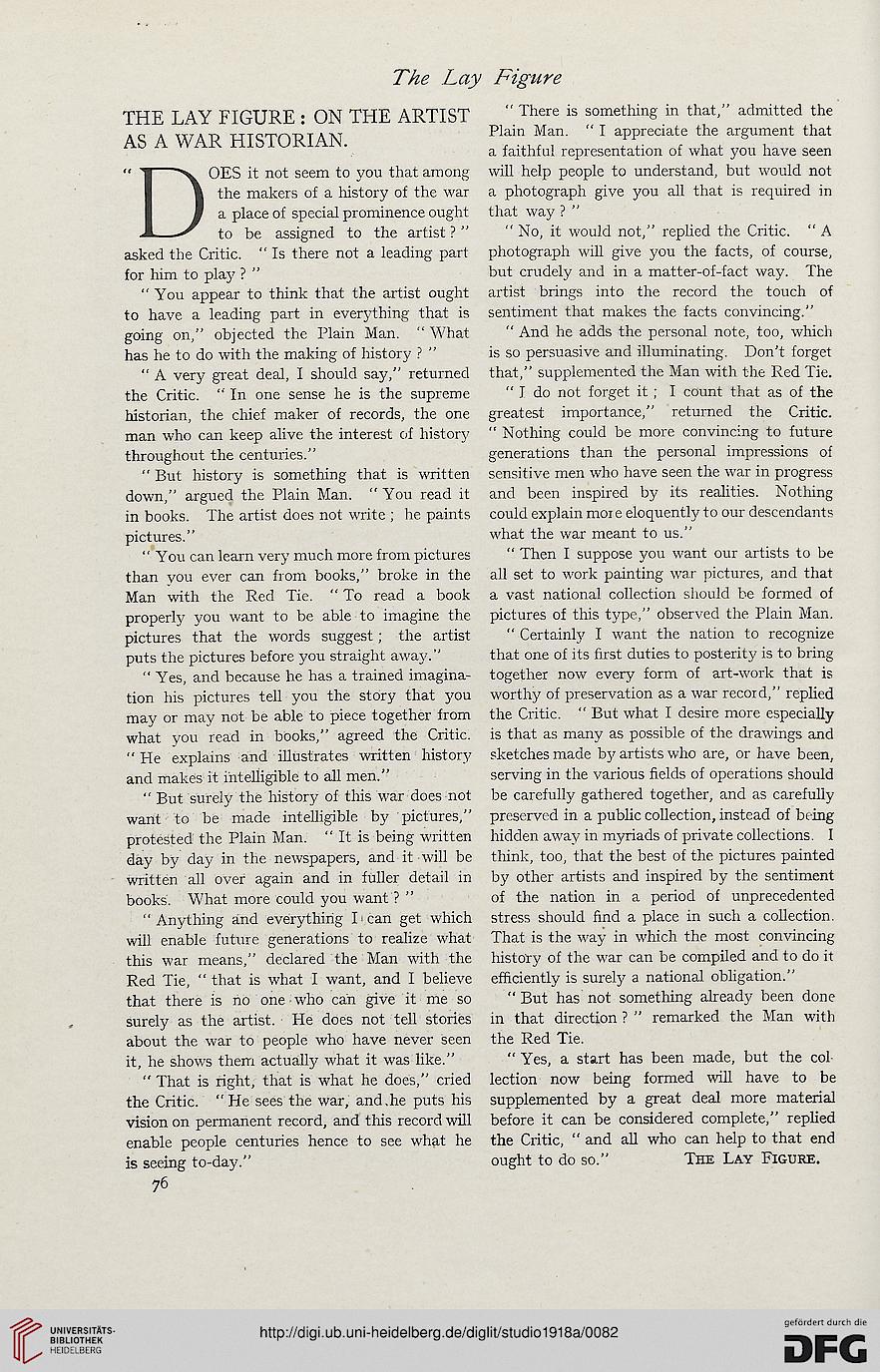 THE LAY FIGURE: ON THE ARTIST
AS A WAR HISTORIAN.

" "¥ >v OES it not seem to you that among
■ the makers of a history of the war
m a place of special prominence ought
—^ to be assigned to the artist ? "
asked the Critic. " Is there not a leading part
for him to play ? "

" You appear to think that the artist ought
to have a leading part in everything that is
going on/' objected the Plain Man. " What
has he to do with the making of history ? "

" A very great deal, I should say," returned
the Critic. " In one sense he is the supreme
historian, the chief maker of records, the one
man who can keep alive the interest of history
throughout the centuries."

" But history is something that is written
down," argued the Plain Man. " You read it
in books. The artist does not write ; he paints
pictures."

" You can learn very much more from pictures
than you ever can from books," broke in the
Man with the Red Tie. " To read a book
properly you want to be able to imagine the
pictures that the words suggest; the artist
puts the pictures before you straight away."

" Yes, and because he has a trained imagina-
tion his pictures tell you the story that you
may or may not be able to piece together from
what you read in books," agreed the Critic.
" He explains and illustrates written history
and makes it intelligible to all men."

" But surely the history of this war does not
want to be made intelligible by pictures,"
protested the Plain Man. " It is being written
day by day in the newspapers, and it will be
written all over again and in fuller detail in
books. What more could you want ? "

"Anything and everything Lean get which
will enable future generations to realize what
this war means," declared the Man with the
Red Tie, " that is what I want, and I believe
that there is no one who can give it me so
surely as the artist. He does not tell stories
about the war to people who have never seen
it, he shows them actually what it was like."

" That is right, that is what he does," cried
the Critic. "He sees the war, and.he puts his
vision on permanent record, and this record will
enable people centuries hence to see what he
is seeing to-day."
76

"There is something in that," admitted the
Plain Man. " I appreciate the argument that
a faithful representation of what you have seen
will help people to understand, but would not
a photograph give you all that is required in
that way ? "

" No, it would not," replied the Critic. " A
photograph will give you the facts, of course,
but crudely and in a matter-of-fact way. The
artist brings into the record the touch of
sentiment that makes the facts convincing."

" And he adds the personal note, too, which
is so persuasive and illuminating. Don't forget
that," supplemented the Man with the Red Tie.

" I do not forget it ; I count that as of the
greatest importance," returned the Critic.
" Nothing could be more convincing to future
generations than the personal impressions of
sensitive men who have seen the war in progress
and been inspired by its realities. Nothing
could explain more eloquently to our descendants
what the war meant to us."

" Then I suppose you want our artists to be
all set to work painting war pictures, and that
a vast national collection should be formed of
pictures of this type," observed the Plain Man.

" Certainty I want the nation to recognize
that one of its first duties to posterity is to bring
together now every form of art-work that is
worthy of preservation as a war record," replied
the Critic. " But what I desire more especially
is that as many as possible of the drawings and
sketches made by artists who are, or have been,
serving in the various fields of operations should
be carefully gathered together, and as carefully
preserved in a public collection, instead of being
hidden away in myriads of private collections. I
think, too, that the best of the pictures painted
by other artists and inspired by the sentiment
of the nation in a period of unprecedented
stress should find a place in such a collection.
That is the way in which the most convincing
history of the war can be compiled and to do it
efficiently is surely a national obligation."

" But has not something already been done
in that direction ? " remarked the Man with
the Red Tie.

" Yes, a start has been made, but the col
lection now being formed will have to be
supplemented by a great deal more material
before it can be considered complete," replied
the Critic, " and all who can help to that end
ought to do so." The Lay Figure.