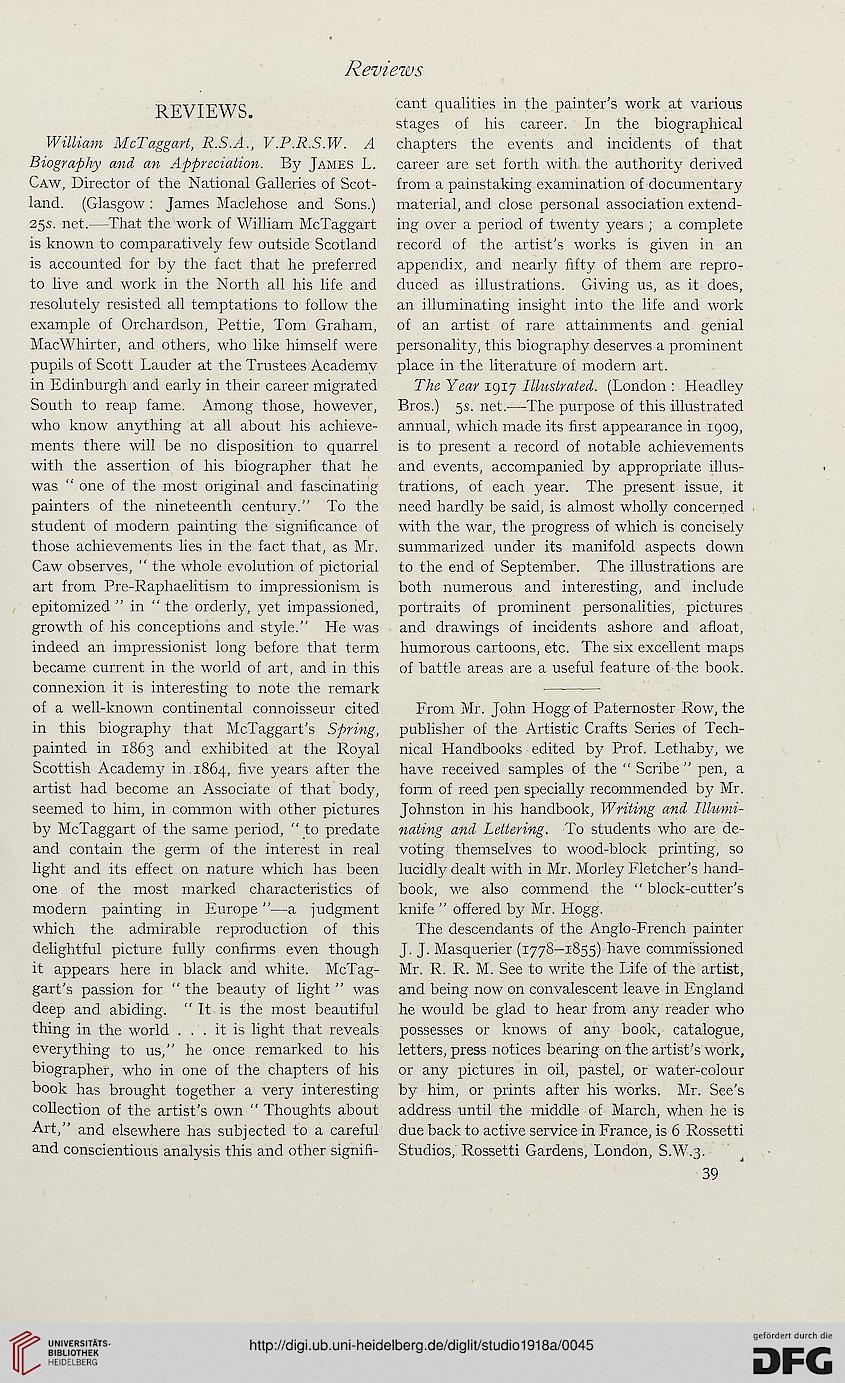 William McTaggart, R.S.A., V.P.R.S.W. A
Biography and an Appreciation. By James L.
Caw, Director of the National Galleries of Scot-
land. (Glasgow: James Madehose and Sons.)
25s. net.—That the work of William McTaggart
is known to comparatively few outside Scotland
is accounted for by the fact that he preferred
to live and work in the North all his life and
resolutely resisted all temptations to follow the
example of Orchardson, Petti e, Tom Graham,
MacWhirter, and others, who like himself were
pupils of Scott Lauder at the Trustees Academv
in Edinburgh and early in their career migrated
South to reap fame. Among those, however,
who know anything at all about his achieve-
ments there will be no disposition to quarrel
with the assertion of his biographer that he
was " one of the most original and fascinating
painters of the nineteenth century." To the
student of modern painting the significance of
those achievements lies in the fa.ct that, as Mr.
Caw observes, " the whole evolution of pictorial
art from Pre-Raphaelitism to impressionism is
epitomized " in " the orderly, yet impassioned,
growth of his conceptions and style." He was
indeed an impressionist long before that term
became current in the world of art, and in this
connexion it is interesting to note the remark
of a well-known continental connoisseur cited
in this biography that McTaggart's Spring,
painted in 1863 and exhibited at the Royal
Scottish Academy in . 1864, five years after the
artist had become an Associate of that body,
seemed to him, in common with other pictures
by McTaggart of the same period, " to predate
and contain the germ of the interest in real
light and its effect on nature which has been
one of the most marked characteristics of
modern painting in Europe"—a judgment
which the admirable reproduction of this
delightful picture fully confirms even though
it appears here in black and white. McTag-
gart's passion for " the beauty of light " was
deep and abiding. "It is the most beautiful
thing in the world ... it is light that reveals
everything to us," he once remarked to his
biographer, who in one of the chapters of his
book has brought together a very interesting
collection of the artist's own " Thoughts about
Art," and elsewhere has subjected to a careful
and conscientious analysis this and other signifi-

cant qualities in the painter's work at various
stages of his career. In the biographical
chapters the events and incidents of that
career are set forth with the authority derived
from a painstaking examination of documentary
material, and close personal association extend-
ing over a period of twenty years ; a complete
record of the artist's works is given in an
appendix, and nearly fifty of them are repro-
duced as illustrations. Giving us, as it does,
an illuminating insight into the life and work
of an artist of rare attainments and genial
personality, this biography deserves a prominent
place in the literature of modern art.

The Year 1917 Illustrated. (London : Headley
Bros.) 5s. net.—The purpose of this illustrated
annual, which made its first appearance in 1909,
is to present a record of notable achievements
and events, accompanied by appropriate illus-
trations, of each year. The present issue, it
need hardly be said, is almost wholly concerned
with the war, the progress of which is concisely
summarized under its manifold aspects down
to the end of September. The illustrations are
both numerous and interesting, and include
portraits of prominent personalities, pictures
and drawings of incidents ashore and afloat,
humorous cartoons, etc. The six excellent maps
of battle areas are a useful feature of the book.

From Mr. John Hogg of Paternoster Row, the
publisher of the Artistic Crafts Series of Tech-
nical Handbooks edited by Prof. Lethaby, we
have received samples of the " Scribe " pen, a
form of reed pen specially recommended by Mr.
Johnston in his handbook, Writing and Illumi-
nating and Lettering. To students who are de-
voting themselves to wood-block printing, so
lucidly dealt with in Mr. Morley Fletcher's hand-
book, we also commend the " block-cutter's
knife " offered by Mr. Hogg.

The descendants of the Anglo-French painter
J. J. Masquerier (1778—1855) have commissioned
Mr. R. R. M. See to write the Life of the artist,
and being now on convalescent leave in England
he would be glad to hear from any reader who
possesses or knows of any book, catalogue,
letters, press notices bearing on the artist's work,
or any pictures in oil, pastel, or water-colour
by him, or prints after his works. Mr. See's
address until the middle of March, when he is
due back to active service in France, is 6 Rossetti
Studios, Rossetti Gardens, London, S.W.3.