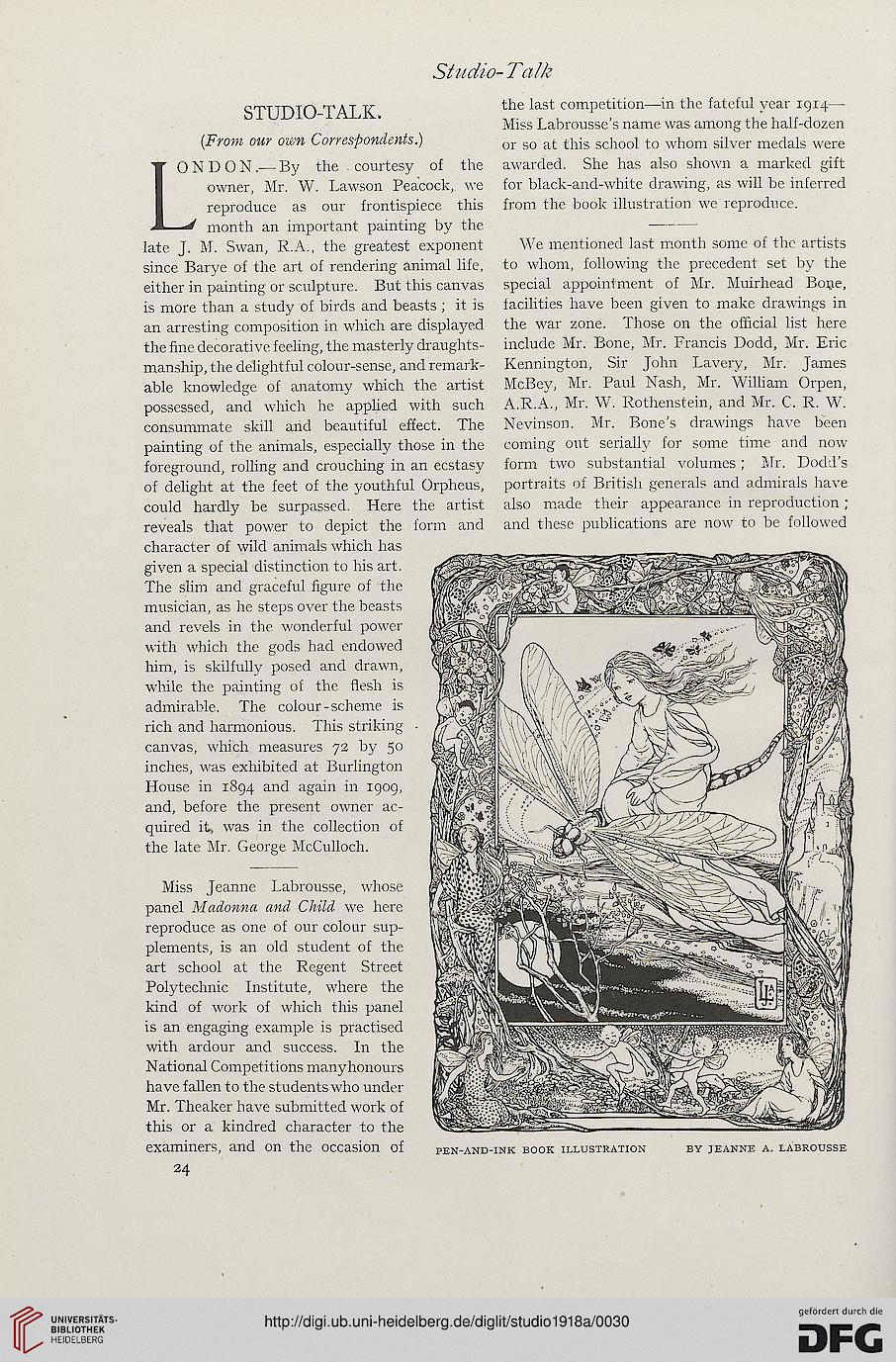 Miss Labrousse's name was among the half-dozen
(From our own Correspondents.) or s0 at this school to whom silver mecials were

0 N D 0 N.— By the . courtesy of the awarded. She has also shown a marked gift
owner, Mr. W. Lawson Peacock, we for black-and-white drawing, as will be inferred
reproduce as our frontispiece this from the book illustration we reproduce.

month an important painting by the ----

late J. M. Swan, R.A., the greatest exponent We mentioned last month some of the artists
since Barye of the art of rendering animal life, to whom, following the precedent set by the
either in painting or sculpture. But this canvas special appointment of Mr. Muirhead Bone,
is more than a study of birds and beasts ; it is facilities have been given to make drawings in
an arresting composition in which are displayed the war zone. Those on the official list here
the fine decorative feeling, the masterly draughts- include Mr. Bone, Mr. Francis Dodd, Mr. Eric
manship, the delightful colour-sense, and remark- Kennington, Sir John Lavery, Mr. James
able knowledge of anatomy which the artist McBey, Mr. Paul Nash, Mr. William Orpen,
possessed, and which he applied with such A.R.A., Mr. W. Rothenstein, and Mr. C. R. W.
consummate skill and beautiful effect. The Nevinson. Mr. Bone's drawings have been
painting of the animals, especially those in the coming out serially for some time and now
foreground, rolling and crouching in an ecstasy form two substantial volumes ; Mr. Dodd's
of delight at the feet of the youthful Orpheus, portraits of British generals and admirals have
could hardly be surpassed. Here the artist also made their appearance in reproduction ;
reveals that power to depict the form and and these publications are now to be followed
character of wild animals which has

and revels in the wonderful power JpKoira 7f l%55§§^ClM
with which the gods had endowed
him, is skilfully posed and drawn,
while the painting of the flesh is
admirable. The colour - scheme is
rich and harmonious. This striking
canvas, which measures 72 by 50
inches, was exhibited at Burlington
House in 1894 and again in 1909,
and, before the present owner ac-
quired it, was in the collection of
the late Mr. George McCulloch.

Miss Jeanne Labrousse, whose
panel Madonna and Child we here
reproduce as one of our colour sup-
plements, is an old student of the
art school at the Regent Street
Polytechnic Institute, where the
kind of work of which this panel
is an engaging example is practised
with ardour and success. In the
National Competitions many honours
have fallen to the students who under
Mr. Theakcr have submitted work of ,x f/^M

this or a kindred character to the ^b^^^j^&^S^——l "^Sg^^^ggftjjagy
examiners, and on the occasion of pen-and-ink book illustration by jeanne a. labrousse
24