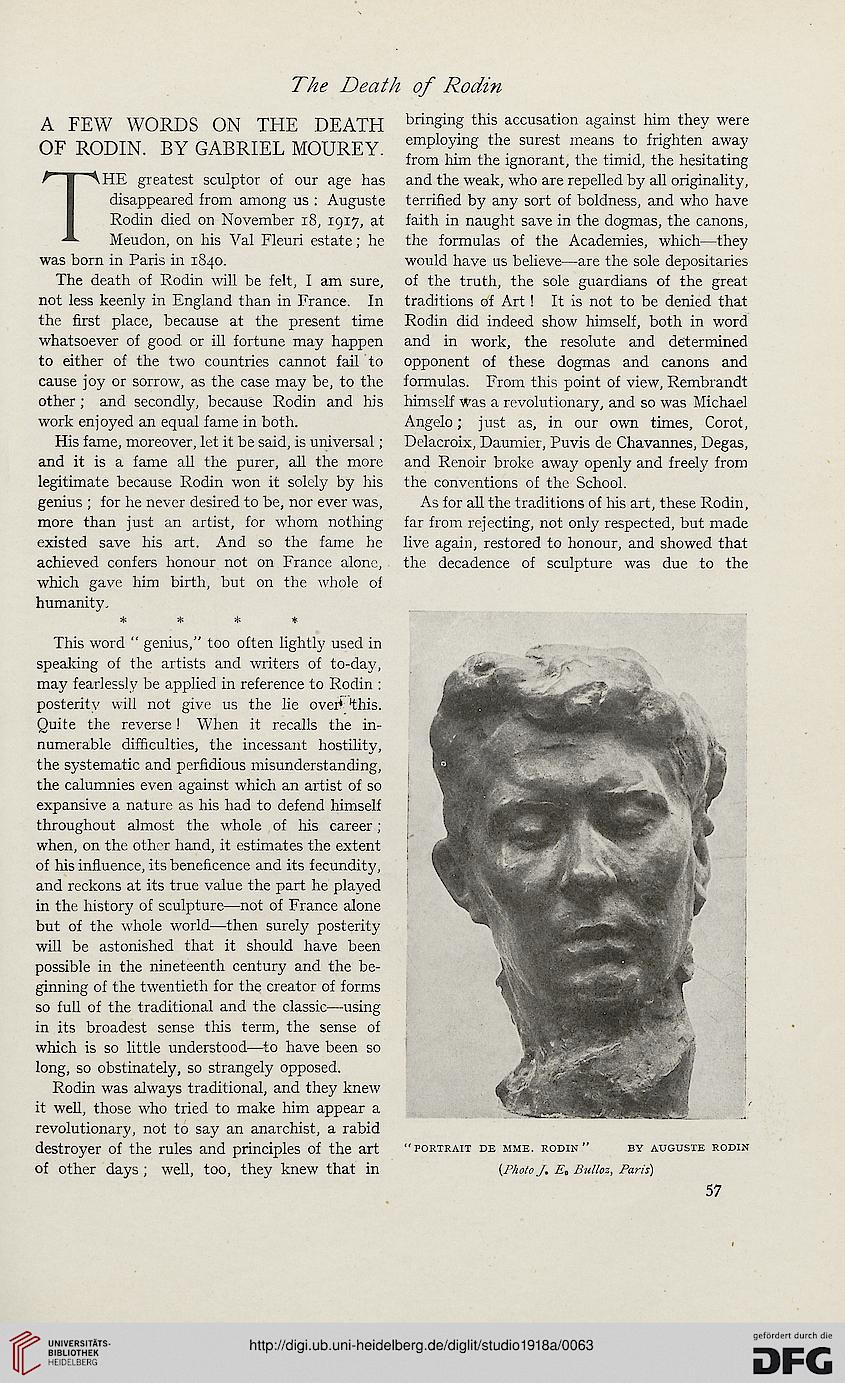 Information about OCR text
The Death of Rodin

A FEW WORDS ON THE DEATH
OF RODIN. BY GABRIEL MOUREY.

THE greatest sculptor of our age has
disappeared from among us : Auguste
Rodin died on November 18, 1917, at
Meudon, on his Val Fleuri estate; he
was born in Paris in 1840.

The death of Rodin will be felt, I am sure,
not less keenly in England than in France. In
the first place, because at the present time
whatsoever of good or ill fortune may happen
to either of the two countries cannot fail to
cause joy or sorrow, as the case may be, to the
other; and secondly, because Rodin and his
work enjoyed an equal fame in both.

His fame, moreover, let it be said, is universal;
and it is a fame all the purer, all the more
legitimate because Rodin won it solely by his
genius ; for he never desired to be, nor ever was,
more than just an artist, for whom nothing
existed save his art. And so the fame he
achieved confers honour not on France alone,
which gave him birth, but on the whole of
humanity.

This word " genius," too often lightly used in
speaking of the artists and writers of to-day,
may fearlessly be applied in reference to Rodin :
posterity will not give us the lie over*" this.
Quite the reverse! When it recalls the in-
numerable difficulties, the incessant hostility,
the systematic and perfidious misunderstanding,
the calumnies even against which an artist of so
expansive a nature as his had to defend himself
throughout almost the whole of his career ;
when, on the other hand, it estimates the extent
of his influence, its beneficence and its fecundity,
and reckons at its true value the part he played
in the history of sculpture—not of France alone
but of the whole world—then surely posterity
will be astonished that it should have been
possible in the nineteenth century and the be-
ginning of the twentieth for the creator of forms
so full of the traditional and the classic—using
in its broadest sense this term, the sense of
which is so little understood—to have been so
long, so obstinately, so strangely opposed.

Rodin was always traditional, and they knew
it well, those who tried to make him appear a
revolutionary, not to say an anarchist, a rabid
destroyer of the rules and principles of the art
of other days; well, too, they knew that in

bringing this accusation against him they were
employing the surest means to frighten away
from him the ignorant, the timid, the hesitating
and the weak, who are repelled by all originality,
terrified by any sort of boldness, and who have
faith in naught save in the dogmas, the canons,
the formulas of the Academies, which—they
would have us believe—are the sole depositaries
of the truth, the sole guardians of the great
traditions of Art! It is not to be denied that
Rodin did indeed show himself, both in word
and in work, the resolute and determined
opponent of these dogmas and canons and
formulas. From this point of view, Rembrandt
himself was a revolutionary, and so was Michael
Angelo; just as, in our own times, Corot,
Delacroix, Daumier, Puvis de Chavannes, Degas,
and Renoir broke away openly and freely from
the conventions of the School.

As for all the traditions of his art, these Rodin,
far from rejecting, not only respected, but made
live again, restored to honour, and showed that
the decadence of sculpture was due to the