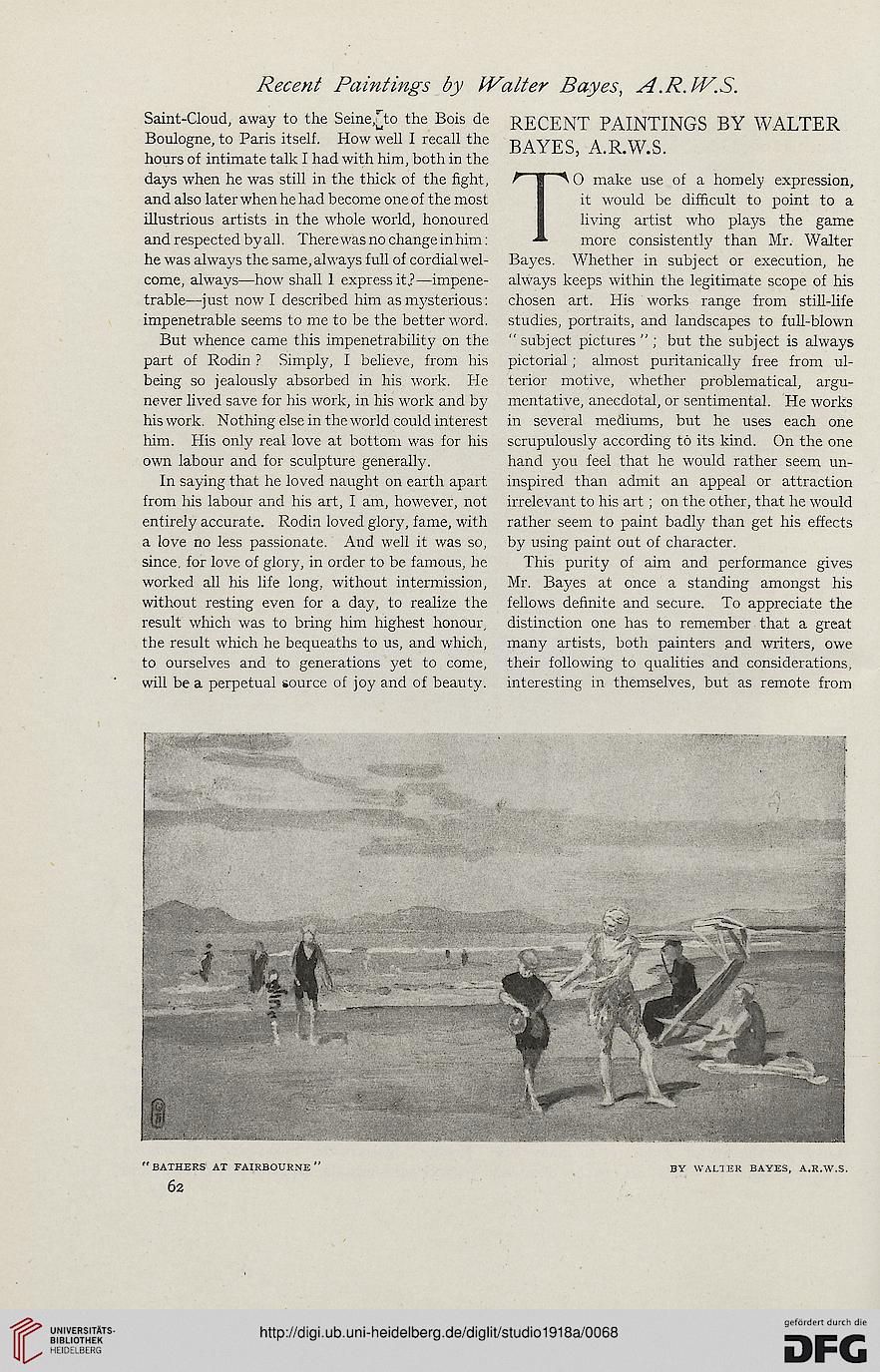 Saint-Cloud, away to the Seine£to the Bois de RECENT PAINTINGS BY WALTER

Boulogne, to Paris itself. How well I recall the BAYES A R W S
hours of intimate talk I had with him, both in the '

days when he was still in the thick of the fight, A I A 0 make use of a homely expression,
and also later when he had become one of the most it would be difficult to point to a

illustrious artists in the whole world, honoured living artist who plays the game

and respected by all. Therewas no change in him: more consistently than Mr. Walter

he was always the same, always full of cordialwel- Bayes. Whether in subject or execution, he

come, always—how shall 1 express it.?—impene- always keeps within the legitimate scope of his

trable—just now I described him as mysterious: chosen art. His works range from still-life

impenetrable seems to me to be the better word, studies, portraits, and landscapes to full-blown

But whence came this impenetrability on the " subject pictures " ; but the subject is always

part of Rodin ? Simply, I believe, from his pictorial; almost puritanically free from ul-

being so jealously absorbed in his work. He terior motive, whether problematical, argu-

never lived save for his work, in his work and by mentative, anecdotal, or sentimental. He works

his work. Nothing else in the world could interest in several mediums, but he uses each one

him. His only real love at bottom was for his scrupulously according to its kind. On the one

own labour and for sculpture generally. hand you feel that he would rather seem un-

from his labour and his art, I am, however, not irrelevant to his art ; on the other, that he would

entirely accurate. Rodin loved glory, fame, with rather seem to paint badly than get his effects

a love no less passionate. And well it was so, by using paint out of character,

since, for love of glory, in order to be famous, he This purity of aim and performance gives

worked all Ms life long, without intermission, Mr. Bayes at once a standing amongst his

without resting even for a day, to realize the fellows definite and secure. To appreciate the

result which was to bring him highest honour, distinction one has to remember that a great

the result which he bequeaths to us, and which, many artists, both painters and writers, owe

to ourselves and to generations yet to come, their following to qualities and considerations,

will be a perpetual source of joy and of beauty, interesting in themselves, but as remote from