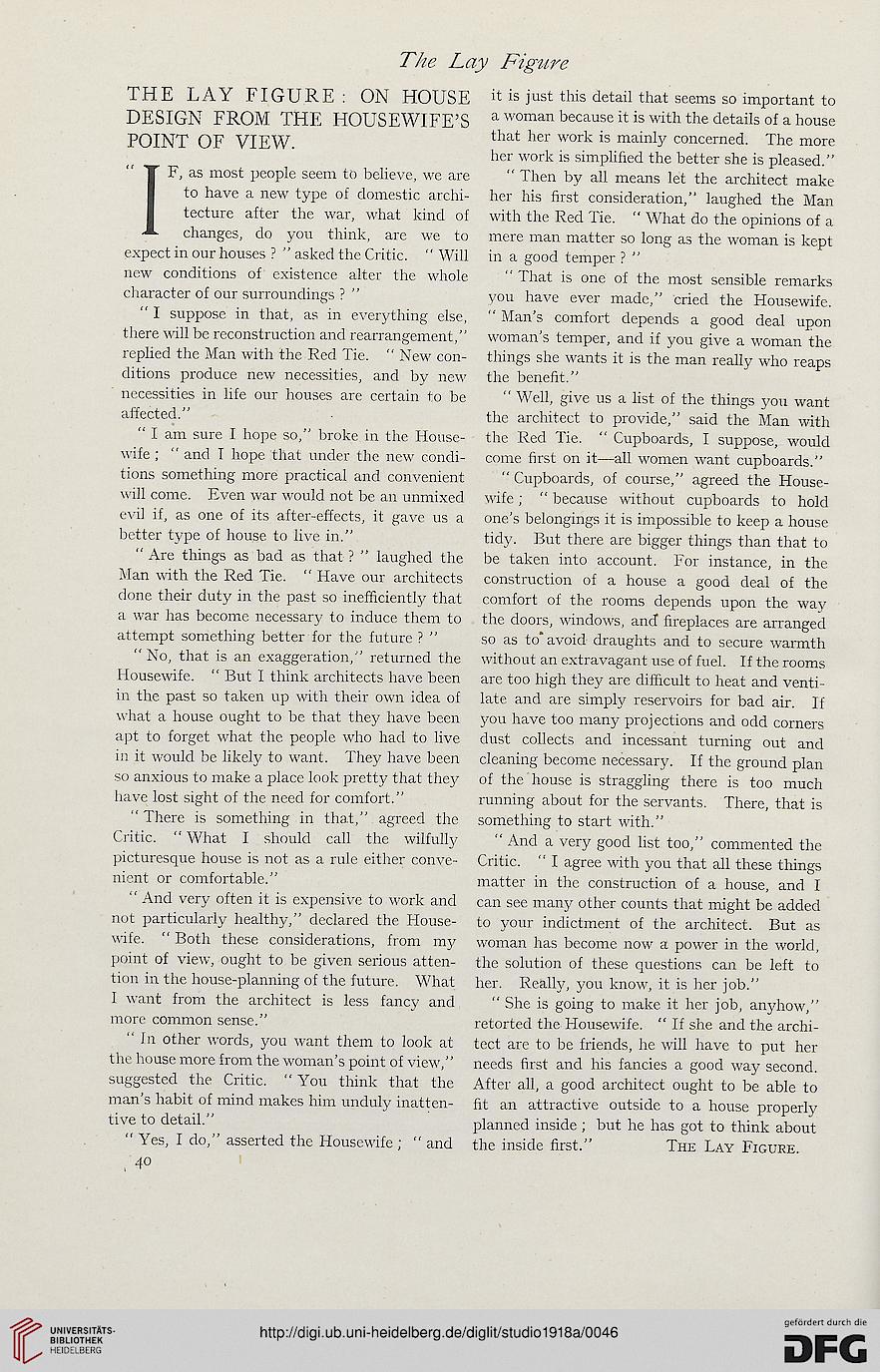 THE LAY FIGURE : ON HOUSE
DESIGN FROM THE HOUSEWIFE'S
POINT OF VIEW.

IF, as most people seem to believe, we are
to have a new type of domestic archi-
tecture after the war, what kind of
changes, do you think, arc we to
expect in our houses ? " asked the Critic. " Will
new conditions of existence alter the whole
character of our surroundings ?

" I suppose in that, as in everything else,
there will be reconstruction and rearrangement,"
replied the Man with the Red Tie. " New con-
ditions produce new necessities, and by new
necessities in life our houses are certain to be
affected."

" I am sure I hope so," broke in the House-
wife ; " and I hope that under the new condi-
tions something more practical and convenient
will come. Even war would not be an unmixed
evil if, as one of its after-effects, it gave us a
better type of house to live in."

" Are things as bad as that ? " laughed the
Man with the Red Tie. " Have our architects
clone their duty in the past so inefficiently that
a war has become necessary to induce them to
attempt something better for the future ? "

" No, that is an exaggeration," returned the
Housewife. " But I think architects have been
in the past so taken up with their own idea of
what a house ought to be that they have been
apt to forget what the people who had to live
in it would be likely to want. They have been
so anxious to make a place look pretty that they
have lost sight of the need for comfort."

" There is something in that," agreed the
Critic. " What I should call the wilfully
picturesque house is not as a rule either conve-
nient or comfortable."

" And very often it is expensive to work and
not particularly healthy," declared the House-
wife. " Both these considerations, from my
point of view, ought to be given serious atten-
tion in the house-planning of the future. What
I want from the architect is less fancy and
more common sense."

"In other words, you want them to look at
the house more from the woman's point of view,"
suggested the Critic. " You think that the
man's habit of mind makes him unduly inatten-
tive to detail."

it is just this detail that seems so important to
a woman because it is with the details of a house
that her work is mainly concerned. The more
her work is simplified the better she is pleased."

" Then by all means let the architect make
her his first consideration," laughed the Man
with the Red Tie. " What do the opinions of a
mere man matter so long as the woman is kept
in a good temper ? "

" That is one of the most sensible remarks
you have ever made," cried the Housewife.
" Man's comfort depends a good deal upon
woman's temper, and if you give a woman the
things she wants it is the man really who reaps
the benefit."

" Well, give us a list of the things you want
the architect to provide," said the Man with
the Red Tie. " Cupboards, I suppose, would
come first on it—all women want cupboards."

" Cupboards, of course," agreed the House-
wife ; " because without cupboards to hold
one's belongings it is impossible to keep a house
tidy. But there arc bigger things than that to
be taken into account. For instance, in the
construction of a house a good deal of the
comfort of the rooms depends upon the way
the doors, windows, and fireplaces are arranged
so as to" avoid draughts and to secure warmth
without an extravagant use of fuel. If the rooms
are too high thej' are difficult to heat and venti-
late and are simply reservoirs for bad air. If
you have too many projections and odd corners
dust collects and incessant turning out and
cleaning become necessary. If the ground plan
of the house is straggling there is too much
running about for the servants. There, that is
something to start with."

" And a very good list too," commented the
Critic. " I agree with you that all these things
matter in the construction of a house, and I
can see many other counts that might be added
to your indictment of the architect. But as
woman has become now a power in the world,
the solution of these questions can be left to
her. Really, you know, it is her job."

" She is going to make it her job, anyhow,"
retorted the Housewife. " If she and the archi-
tect are to be friends, he will have to put her
needs first and his fancies a good way second.
After all, a good architect ought to be able to
fit an attractive outside to a house properly
planned inside ; but he has got to think about
the inside first." The Lay Figure.