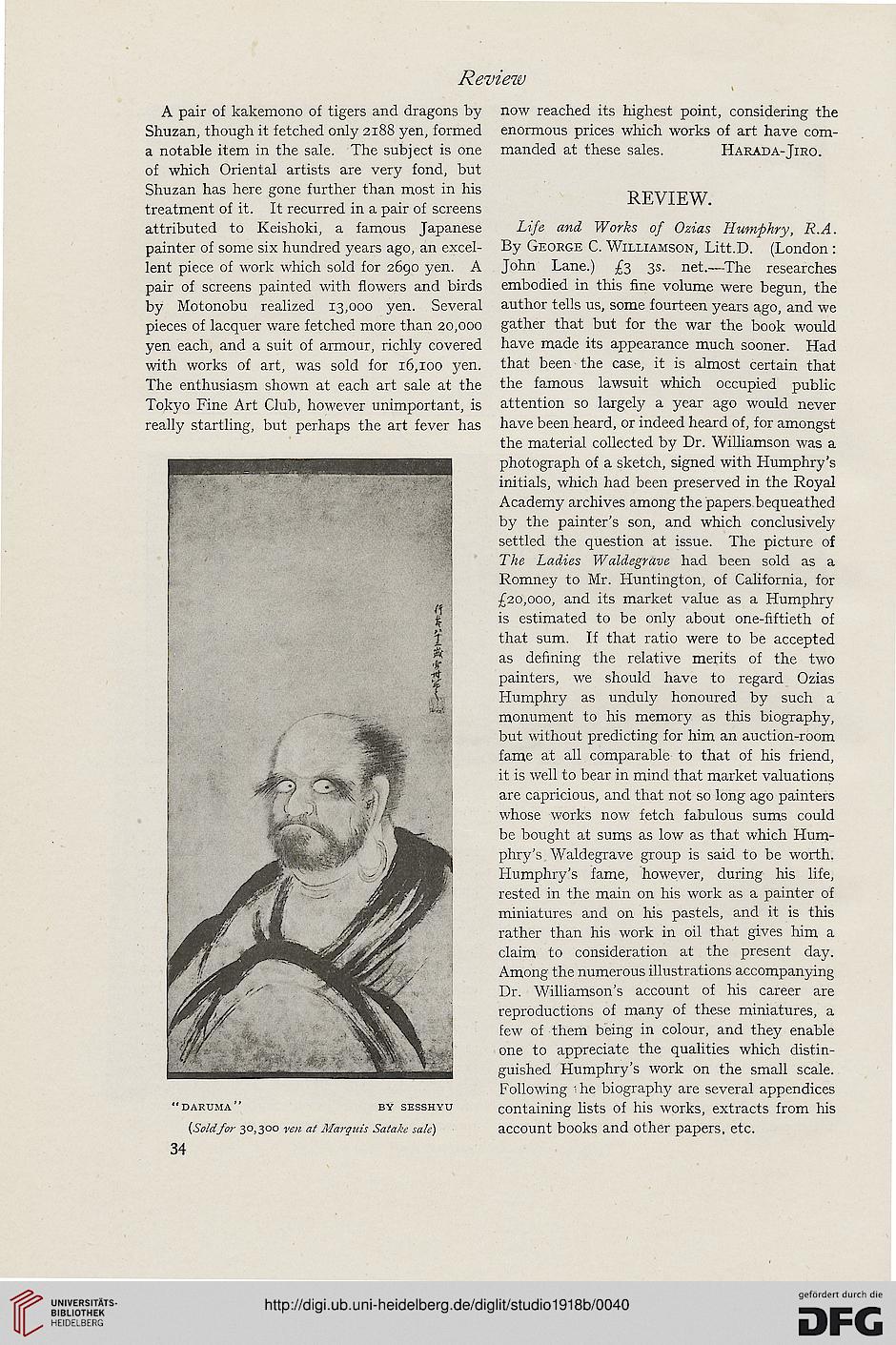 A pair of kakemono of tigers and dragons by
Shuzan, though it fetched only 2188 yen, formed
a notable item in the sale. The subject is one
of which Oriental artists are very fond, but
Shuzan has here gone further than most in his
treatment of it. It recurred in a pair of screens
attributed to Keishoki, a famous Japanese
painter of some six hundred years ago, an excel-
lent piece of work which sold for 2690 yen. A
pair of screens painted with flowers and birds
by Motonobu realized 13,000 yen. Several
pieces of lacquer ware fetched more than 20,000
yen each, and a suit of armour, richly covered
with works of art, was sold for 16,100 yen.
The enthusiasm shown at each art sale at the
Tokyo Fine Art Club, however unimportant, is
really startling, but perhaps the art fever has

"D ARUM A" BY SESSHYU

now reached its highest point, considering the
enormous prices which works of art have com-
manded at these sales. Harada-Jiro.

Life and Works of Ozias Humphry, R.A.
By George C. Williamson, Litt.D. (London :
John Lane.) £3 3s. net.—The researches
embodied in this fine volume were begun, the
author tells us, some fourteen years ago, and we
gather that but for the war the book would
have made its appearance much sooner. Had
that been the case, it is almost certain that
the famous lawsuit which occupied public
attention so largely a year ago would never
have been heard, or indeed heard of, for amongst
the material collected by Dr. Williamson was a
photograph of a sketch, signed with Humphry's
initials, which had been preserved in the Royal
Academy archives among the papers bequeathed
by the painter's son, and which conclusively
settled the question at issue. The picture of
The Ladies Waldegrave had been sold as a
Romney to Mr. Huntington, of California, for
£20,000, and its market value as a Humphry
is estimated to be only about one-fiftieth of
that sum. If that ratio were to be accepted
as defining the relative merits of the two
painters, we should have to regard Ozias
Humphry as unduly honoured by such a
monument to his memory as this biography,
but without predicting for him an auction-room
fame at all comparable to that of his friend,
it is well to bear in mind that market valuations
are capricious, and that not so long ago painters
whose works now fetch fabulous sums could
be bought at sums as low as that which Hum-
phry's Waldegrave group is said to be worth.
Humphry's fame, however, during his life,
rested in the main on his work as a painter of
miniatures and on his pastels, and it is this
rather than his work in oil that gives him a
claim to consideration at the present day.
Among the numerous illustrations accompanying
Dr. Williamson's account of his career are
reproductions of many of these miniatures, a
few of them being in colour, and they enable
one to appreciate the qualities which distin-
guished Humphry's work on the small scale.
Following ihe biography are several appendices
containing lists of his works, extracts from his
account books and other papers, etc.