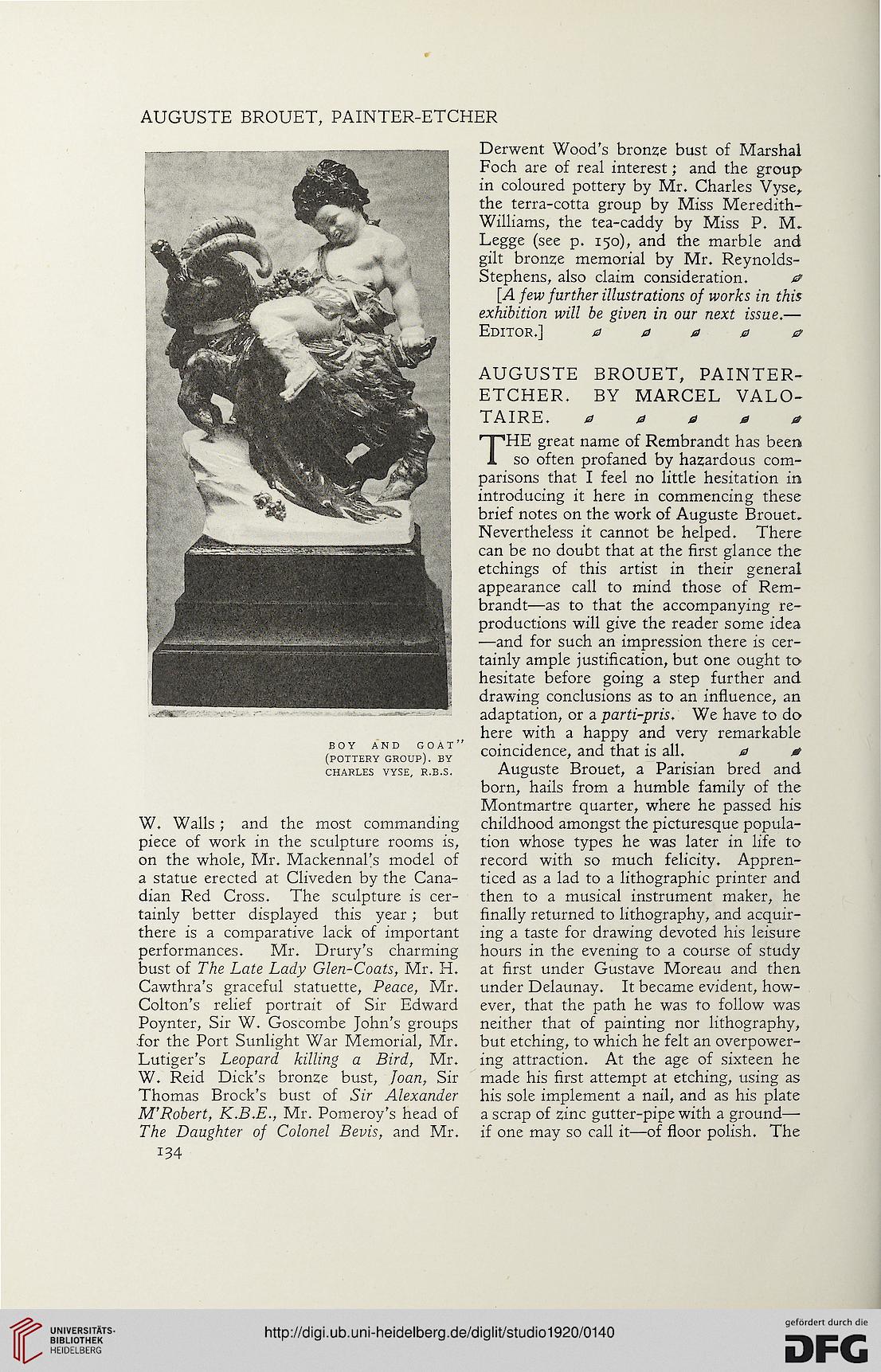 Derwent Wood’s bronze bust of Marshal
Foch are of real interest; and the group
in coloured pottery by Mr. Charles Vyse,
the terra-cotta group by Miss Meredith-
Williams, the tea-caddy by Miss P. M.
Legge (see p. 150), and the marble and
gilt bronze memorial by Mr. Reynolds-
Stephens, also claim consideration. 0
[A few further illustrations of works in this
exhibition will be given in our next issue.—
Editor.] 00000

THE great name of Rembrandt has been
so often profaned by hazardous com-
parisons that I feel no little hesitation in
introducing it here in commencing these
brief notes on the work of Auguste Brouet.
Nevertheless it cannot be helped. There
can be no doubt that at the first glance the
etchings of this artist in their general
appearance call to mind those of Rem-
brandt—as to that the accompanying re-
productions will give the reader some idea
—and for such an impression there is cer-
tainly ample justification, but one ought to-
hesitate before going a step further and
drawing conclusions as to an influence, an
adaptation, or a parti-pris. We have to do
here with a happy and very remarkable
coincidence, and that is all. 0 0

Auguste Brouet, a Parisian bred and
born, hails from a humble family of the
Montmartre quarter, where he passed his
childhood amongst the picturesque popula-
tion whose types he was later in life to
record with so much felicity. Appren-
ticed as a lad to a lithographic printer and
then to a musical instrument maker, he
finally returned to lithography, and acquir-
ing a taste for drawing devoted his leisure
hours in the evening to a course of study
at first under Gustave Moreau and then
under Delaunay. It became evident, how-
ever, that the path he was to follow was
neither that of painting nor lithography,
but etching, to which he felt an overpower-
ing attraction. At the age of sixteen he
made his first attempt at etching, using as
his sole implement a nail, and as his plate
a scrap of zinc gutter-pipe with a ground—
if one may so call it—of floor polish. The