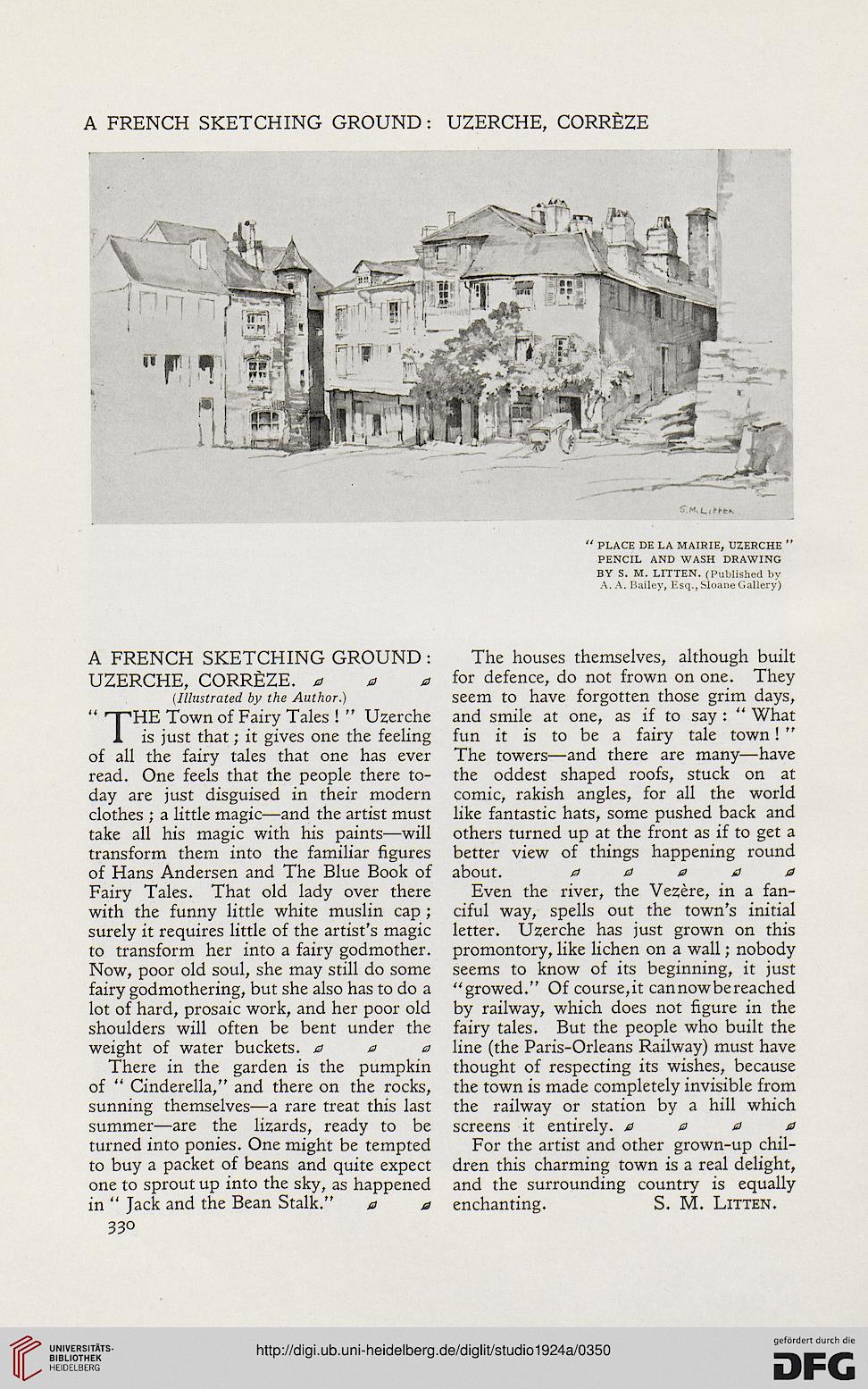 (Illustrated by the Author.)
" T^HE Town of Fairy Tales ! " Uzerche
1 is just that; it gives one the feeling
of all the fairy tales that one has ever
read. One feels that the people there to-
day are just disguised in their modern
clothes ; a little magic—and the artist must
take all his magic with his paints—will
transform them into the familiar figures
of Hans Andersen and The Blue Book of
Fairy Tales. That old lady over there
with the funny little white muslin cap ;
surely it requires little of the artist's magic
to transform her into a fairy godmother.
Now, poor old soul, she may still do some
fairy godmothering, but she also has to do a
lot of hard, prosaic work, and her poor old
shoulders will often be bent under the
weight of water buckets, 000

There in the garden is the pumpkin
of " Cinderella," and there on the rocks,
sunning themselves—a rare treat this last
summer—are the lizards, ready to be
turned into ponies. One might be tempted
to buy a packet of beans and quite expect
one to sprout up into the sky, as happened
in " Jack and the Bean Stalk." a a

The houses themselves, although built
for defence, do not frown on one. They
seem to have forgotten those grim days,
and smile at one, as if to say : " What
fun it is to be a fairy tale town! "
The towers—and there are many—have
the oddest shaped roofs, stuck on at
comic, rakish angles, for all the world
like fantastic hats, some pushed back and
others turned up at the front as if to get a
better view of things happening round
about. a 0 a a a

Even the river, the Vezere, in a fan-
ciful way, spells out the town's initial
letter. Uzerche has just grown on this
promontory, like lichen on a wall; nobody
seems to know of its beginning, it just
"growed." Of course,it can now be reached
by railway, which does not figure in the
fairy tales. But the people who built the
line (the Paris-Orleans Railway) must have
thought of respecting its wishes, because
the town is made completely invisible from
the railway or station by a hill which
screens it entirely, 0000

For the artist and other grown-up chil-
dren this charming town is a real delight,
and the surrounding country is equally
enchanting. S. M. Litten.