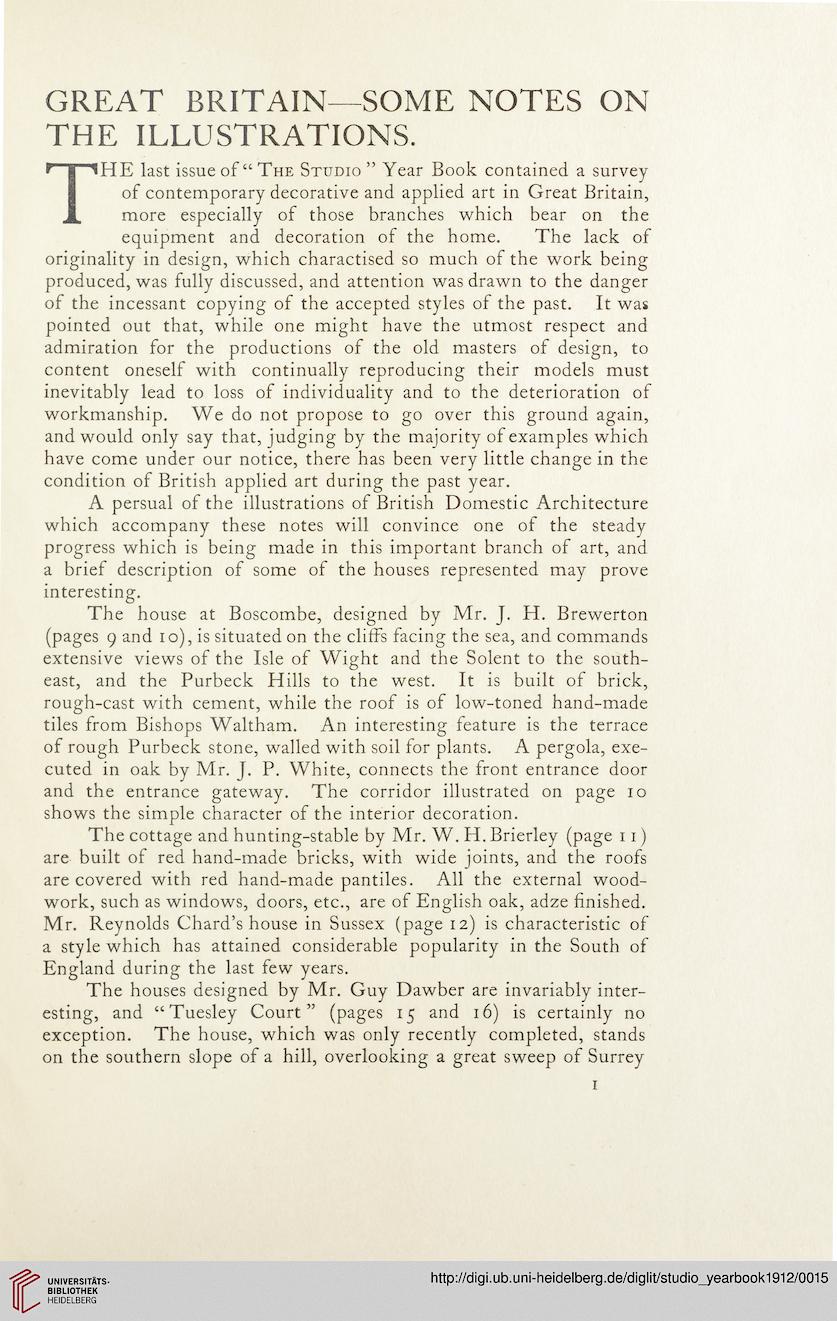 Information about OCR text
GREAT BRITAIN—SOME NOTES ON
THE ILLUSTRATIONS.

THE last issue of “ The Studio ” Year Book contained a survey
of contemporary decorative and applied art in Great Britain,
more especially of those branches which bear on the
equipment and decoration of the home. The lack of
originality in design, which charactised so much of the work being
produced, was fully discussed, and attention was drawn to the danger
of the incessant copying of the accepted styles of the past. It was
pointed out that, while one might have the utmost respect and
admiration for the productions of the old masters of design, to
content oneself with continually reproducing their models must
inevitably lead to loss of individuality and to the deterioration of
workmanship. We do not propose to go over this ground again,
and would only say that, judging by the majority of examples which
have come under our notice, there has been very little change in the
condition of British applied art during the past year.
A persual of the illustrations of British Domestic Architecture
which accompany these notes will convince one of the steady
progress which is being made in this important branch of art, and
a brief description of some of the houses represented may prove
interesting.
The house at Boscombe, designed by Mr. J. H. Brewerton
(pages 9 and io), is situated on the cliffs facing the sea, and commands
extensive views of the Isle of Wight and the Solent to the south-
east, and the Purbeck Hills to the west. It is built of brick,
rough-cast with cement, while the roof is of low-toned hand-made
tiles from Bishops Waltham. An interesting feature is the terrace
of rough Purbeck stone, walled with soil for plants. A pergola, exe-
cuted in oak by Mr. J. P. White, connects the front entrance door
and the entrance gateway. The corridor illustrated on page io
shows the simple character of the interior decoration.
The cottage and hunting-stable by Mr. W. H. Brierley (page 11)
are built of red hand-made bricks, with wide joints, and the roofs
are covered with red hand-made pantiles. All the external wood-
work, such as windows, doors, etc., are of English oak, adze finished.
Mr. Reynolds Chard’s house in Sussex (page 12) is characteristic of
a style which has attained considerable popularity in the South of
England during the last few years.
The houses designed by Mr. Guy Dawber are invariably inter-
esting, and “Tuesley Court” (pages 15 and 16) is certainly no
exception. The house, which was only recently completed, stands
on the southern slope of a hill, overlooking a great sweep of Surrey