The Studio yearbook of decorative art — 1919 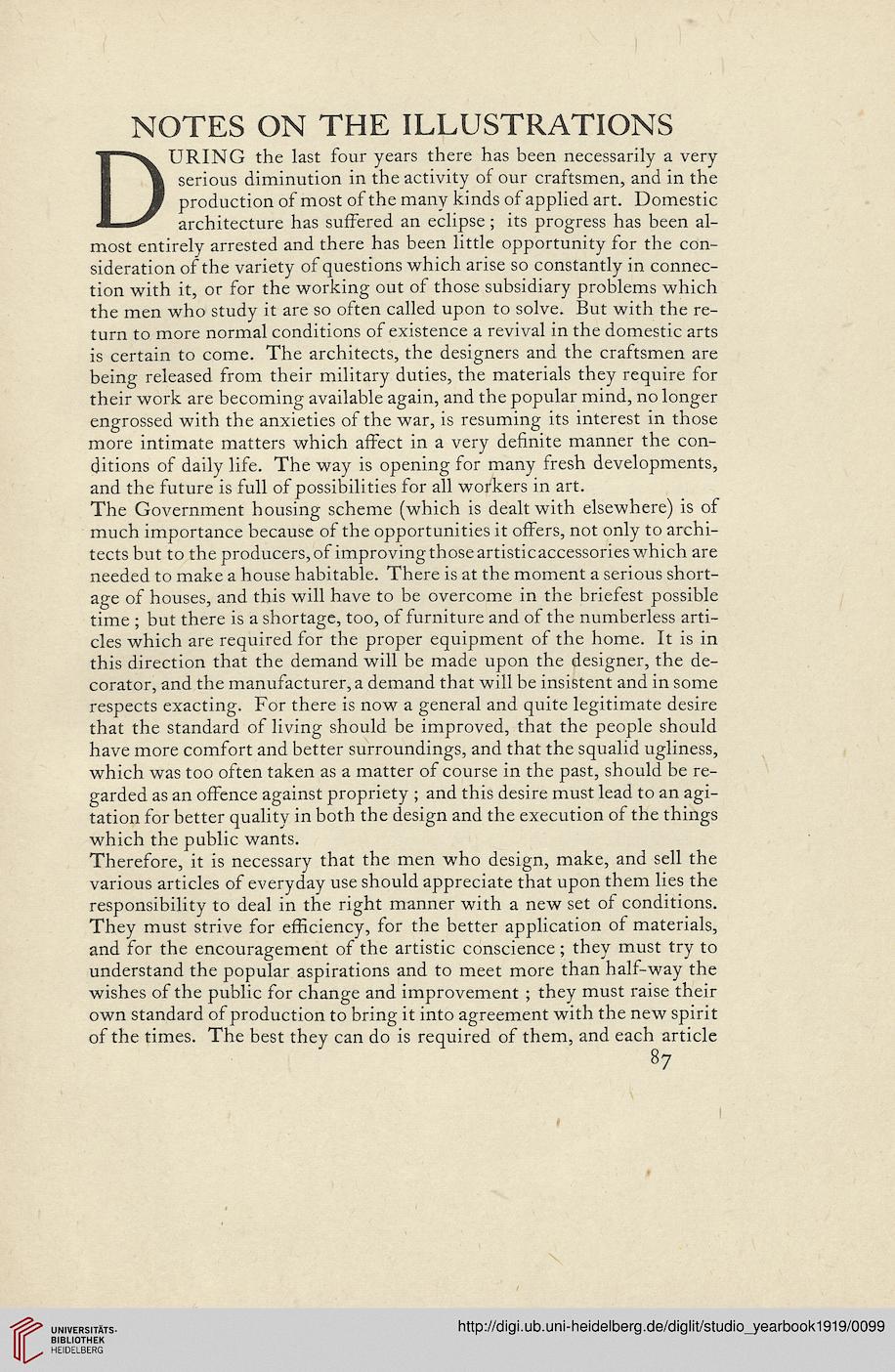 Information about OCR text
NOTES ON THE ILLUSTRATIONS

DURING the last four years there has been necessarily a very
serious diminution in the activity of our craftsmen, and in the
production of most of the many kinds of applied art. Domestic
architecture has suffered an eclipse; its progress has been al-
most entirely arrested and there has been little opportunity for the con-
sideration of the variety of questions which arise so constantly in connec-
tion with it, or for the working out of those subsidiary problems which
the men who study it are so often called upon to solve. But with the re-
turn to more normal conditions of existence a revival in the domestic arts
is certain to come. The architects, the designers and the craftsmen are
being released from their military duties, the materials they require for
their work are becoming available again, and the popular mind, no longer
engrossed with the anxieties of the war, is resuming its interest in those
more intimate matters which affect in a very definite manner the con-
ditions of daily life. The way is opening for many fresh developments,
and the future is full of possibilities for all workers in art.
The Government housing scheme (which is dealt with elsewhere) is of
much importance because of the opportunities it offers, not only to archi-
tects but to the producers, of improving those artistic accessories which are
needed to make a house habitable. There is at the moment a serious short-
age of houses, and this will have to be overcome in the briefest possible
time ; but there is a shortage, too, of furniture and of the numberless arti-
cles which are required for the proper equipment of the home. It is in
this direction that the demand will be made upon the designer, the de-
corator, and the manufacturer, a demand that will be insistent and in some
respects exacting. For there is now a general and quite legitimate desire
that the standard of living should be improved, that the people should
have more comfort and better surroundings, and that the squalid ugliness,
which was too often taken as a matter of course in the past, should be re-
garded as an offence against propriety ; and this desire must lead to an agi-
tation for better quality in both the design and the execution of the things
which the public wants.
Therefore, it is necessary that the men who design, make, and sell the
various articles of everyday use should appreciate that upon them lies the
responsibility to deal in the right manner with a new set of conditions.
They must strive for efficiency, for the better application of materials,
and for the encouragement of the artistic conscience; they must try to
understand the popular aspirations and to meet more than half-way the
wishes of the public for change and improvement ; they must raise their
own standard of production to bring it into agreement with the new spirit
of the times. The best they can do is required of them, and each article